Through the mist of dawns early rays they came in untold numbers, El'Thote to all units take up defencive positions enemy spotted, an eerie  silents seemed to have settled over the world & for the next few minutes you could have hared a pin drop. 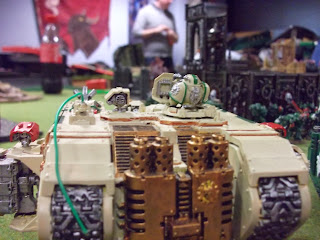 This silents was scattered by a sonic screech fallowed by the beat of gigantic leathery wings as a massive hive Tyrant took to the sky & the very ground started to vibrate under the pounding of many hooves. 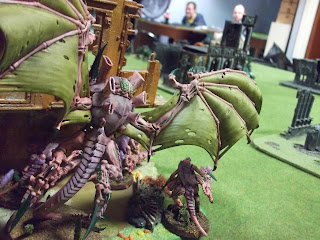 As one the Dark Angles open up fire on the tyrant in the sky but try as they might they couldn't ground the beast, while at same time the sky darkened s it started to fill with mycetic spores.
Dropping from the sky like a bird of pray & firing out brainleech worms from his double  devourers the creature landed & smashed into squad Valis. 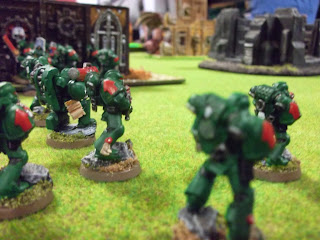 Fearing the tyrant tear open a gap on the left flank the interrogator- chaplin ordered the driver of the land raider crusader to make all speed in that diction so that himself & his quad of terminators could engage the brute in combat. 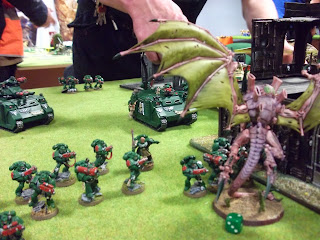 Rushing out of the land raider could see that the monster was pulling his marines a part as if they where nothing more then kids toys but the chaplin knew his man would fight till the last man to stop the tyrant from braking through. 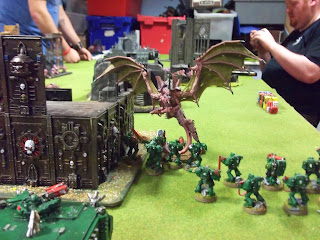 As the Chaplin & his squad  launched their assault the first of the spores where smashing into the ground all around them unleashing the cargo of hormagaunts & genestealers onto the middle of the marines lines.
El'Thote had fraught nids often enough to know that the best change of victory was by taking out synapse of the brood & that there was no better change to start them with a tyrant. 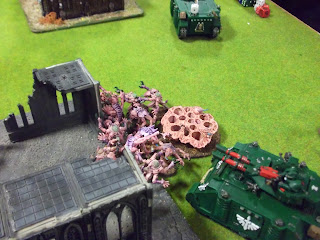 With the tyrant finally finished off El'thote ordered his man that when possible to fire on the synapse creatures buy given that the nins where now in among them this was something that was going to be easier said then done but still was their best change of victory. 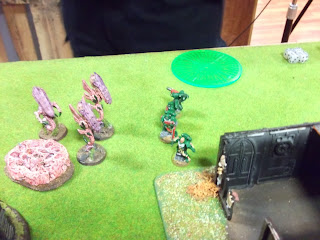 Reembarking into the lander he ordered it forward into the haert of the enemy, but just as it was nearing its goal the vehicle was rocked violently bring the war machine to a shuddering halt by a massive trannofex who had been lurking unseen in a ruined building & had come charging out smashing into the side of the raider. 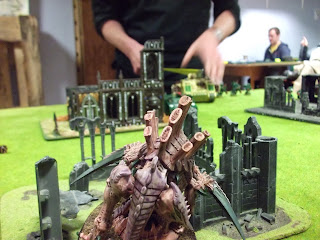 Disembarking once more the chaplin sent his squad of terminators against the monstrous beast while he himself set off to try to engage a brood of  zoanthrope that he could see where holding the nids front line together, with its rage seeming to be focused on the raider the the large tyranid didn't even notice the terminators until the blows from their thunder hammers rained down upon him. 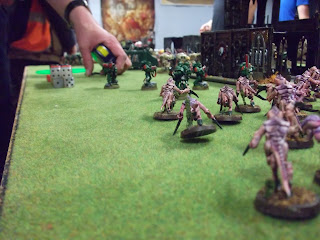 Rushing forward El'Thote was knocked from his feet as the bony spines fired from impaler cannons at such velocity that they punched through his terminator armour ending the life of the  interrogator- chaplin, but his efforts had not been in vain, as the sudden change in the direction of the battle had costed confusion in the in the hive-mind buying enough time for his man clear the nid forces from their lines. 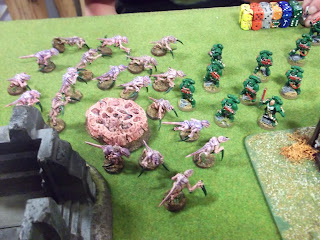 Then as is the way with the tyranids the battle was over as they pulled back of reasons know only to themselves. 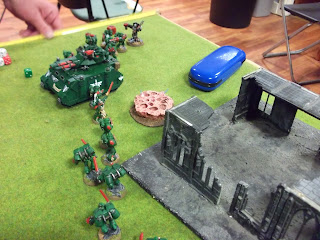 My thanks to Alan for what was a very enjoyable game, to Lenny for coming up with a very good scenario & to you for dropping in I hope you enjoyed the post.
Unfortunately I'll miss the next two rounds of the campaign but hive fleet Nagaina  will be back on Kallidus IV in a couple of weeks time.
Posted by Frank O Donnell at 10/27/2013