+++++++++161111111111111111111111111111111111 +++++++++++
++++++++in omnibus amare et servire Imperio Domino +++++++++++++
Inquisitor Capetillo
Your presence is required on the planet of Odec Prime as soon as possible as matters are currently playing out not in our favour:
The Duranil system is one of several key naval and trade systems providing support to the Cadian war effort.  Though Odec Secondus is the location of our fleet support facilities, Odec prime provides supplies to keep the facility operational.
Primarily a mining and industrial world, Odec prime is currently in a state of unrest due to the assassination of Governor Kiels borbok. Due to the nature of his assassination and the resulting unrest, we heavily suspect agents of the Arch to be involved.
Currently the planet is in a state of martial law, with the local PDF in the process of heavily suppressing any and all descent. Due to the current situation sector wide,  you will have to go this alone.
Our sources have provided information of a guild master currently trying to get off world. This guild master may know who directed the governors assassination and would be a good start to your investigation.
+Thought for the day+: Fire makes puritans of us all.

Thus is how it be gen, so rounding up my the following of my loyal helpers Greek, Von Blixen, Rouxinal & Gnut we boarded the first transporter for Odec Prime, where upon arrival we required lodging from which we'd have a base to begin our investigation. 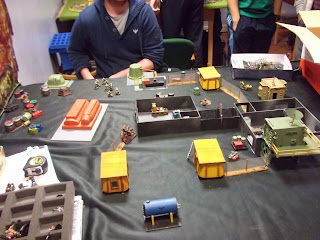 After a couple of days we got our first lead which Greek  picked up in local bizarre was that Guild Master Le Farge who had gone into hiding since the assassination of the planetary Governor, was held up in a hydro parts factory while what remained of his staff try to have him smuggled off the planet. 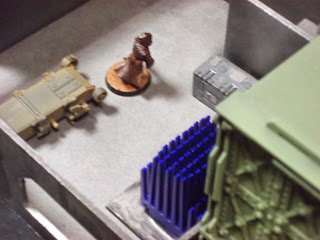 Leaving Rouxinal in the digs hard wired up to a scanner to keep track of the local P.D.F transmissions,  the four of us headed out to the factory to check it out in the grav vehicle we'd hired out. 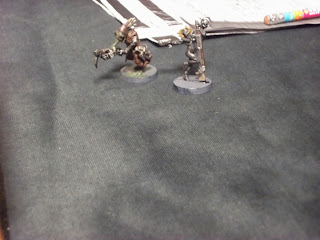 After about an hour or so we reach our goal, the hydro parts manufacturing plant was a vast complex spread out over many acres & made up of many buildings, so we decided to split up into pairs. 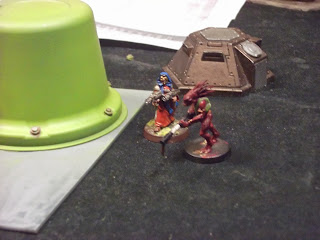 Greek & Von Blixen would team up & check out the north compound while Gnut & myself would take the south one, with the sun just starting to set I touched in with base on the comms where Rouxinal informed us that there was nothing of interest to us to report from the P.D.F transmissions. 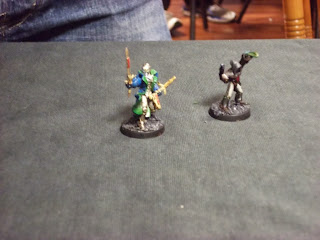 As we set off I thought it might be no harm to cast a psychic shield on myself  but someone must have had a psychic damper in place as I had to make a few a temps before I could feel the familiar tingle surround me. 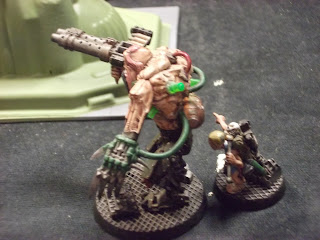 Up ahead Gnut had pulled down a section of fencing through which we could enter the compound, about 80m over to our left a bulkhead light was shining over the top of a door way so we set off in that direction.
From else where in the compound we thought we heard what sounded like gunfire & drew our weapons
We had got no more then half way a cross when the door bust open & a figure who's stiletto we could only make out against the light opened fire on us. 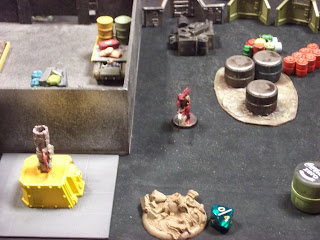 I dived for cover & aimed my lasgun returning fire in support of Gnut who had just stood his ground & opened up with the heavy stubber, our combined fire proved successful as our would be assailant dropped to the floor. 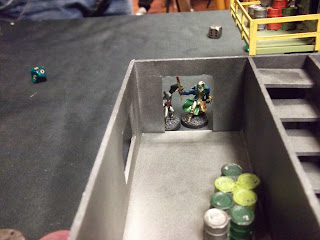 Coming back to my feet I heard a swish sound as the injectors around Gnut body sent the stimulants rushing in to his veins, as the drugs kicked in Gnut took off at a sprint to the open door way, I was just about to fallow where my comms crackled & I heard Rouxinal voice informing me the P,D.F where enroute to the plant in response to a report of gunfire. 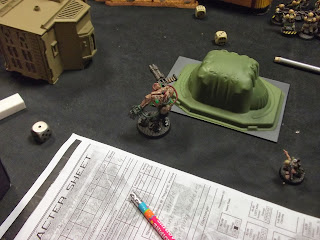 As I reached the door I could see into a little hall where Gnuts was engaged in combat with a man, in this hallway I also notices 3 doors 2 of which where open, squeezing in past the combatants I set about trying to open the lock on the third door. 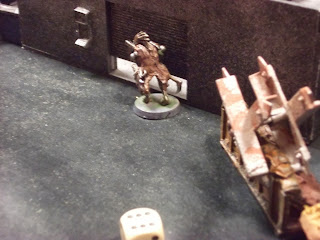 From the other side of the door I could hear someone call something out & then the sound of running feet, but the lock was proving harder to crack then I thought it would, the combat going on behind me might have had something to do with this. 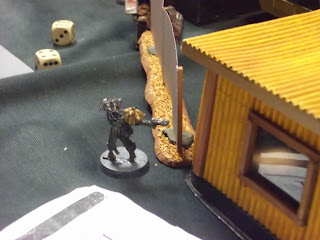 Then at last there was a clink as the lock open fallowed by a thump as Gnut finally got the better of his opponent who collapsed on the floor, sending Gnut on through the now open door I turned to face the 4 P.D. F men who where just entering the building with their weapons at the ready. 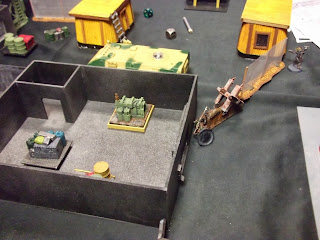 Flashing my Inquisitional rosette I quickly filled them in on what was happening & sent them on down the corridor in aid of Gnut's, while I headed back outside & sprinted along the side of the building in the same direction the the corridor was heading. 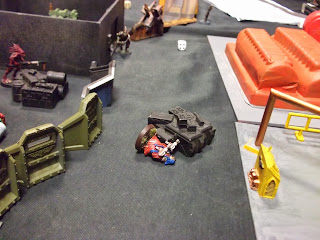 Jumping a low wall I rounded the corner of the building to find an open roller shutter of a cargo entrance from which I could hear raised voices, what a sight their was as I entered the cargo bay.
On the ground lay the body of a young woman & a kroot, in a corner was the guild master with Gnut standing between him & the P.D.F who while trying to order Gnut to drop his weapon but where reluctant to get any closer to him or open fire upon him. 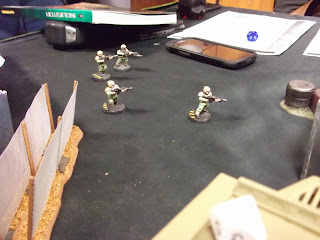 I immediately calmed things down & order the P.D.F to see to the downed woman & the kroot & also to cordon off the compound to make sure no one else got in or out of it, then turning my attention to the guild master I introduced myself. 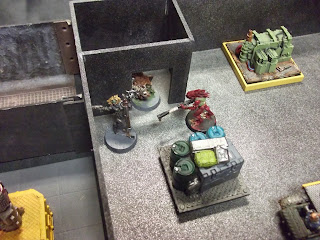 Once outside & out of ear shot of the P.D.F I sent word to Greek & Von Blixen that we had the guild master & to meet us back at the vehicle, needless to say they had had an uneventful night. 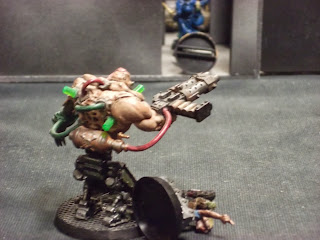 We've since rented out 3 other lodging under false names so that me can keep moving Le Farge from one to the other while we figure out our next plan of action, I had hoped to get in & out with out making my presents on the planet know but that wasn't to be & now due to my unusual size it will now be even harder to get us all safely off the planet. 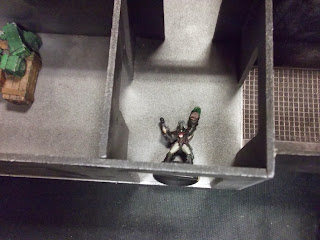 My thanks to Ralph, Paddy, Roman & our GM Jamie also thanks to you for dropping in.