Something I seemed to have stopped do lately is posts of models I've painted (washed) now why that came about I'm not sure.

Now needless to say I'm not a great painter & I would never do a post on painting as in how to do it, but the models don't look to bad I hope & some people like to see models :-)

First up is a little conversion I did for an old work buggy, I can see this getting a lot of use in games & it fits in well with the way I see the Tricol system, something as mad as this right beside a modern day forklift. 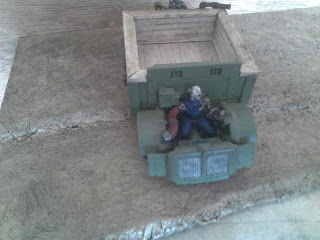 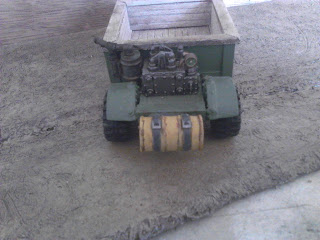 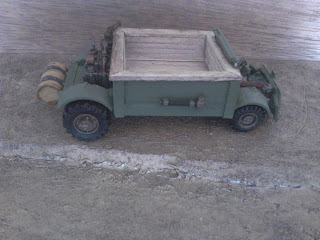 The four guys below I just done up to be NCP's in games, as you can see none of them have any weapons which was something I needed. 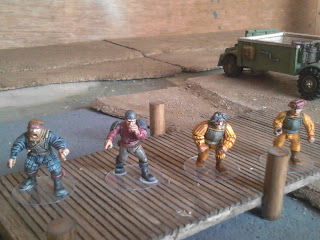 This little guy I just love, squig,s just I don't know seem to always take me back to when 40K was a bit different to what it is to day & I think if I was to do it all again I'd have been an ork player :-) 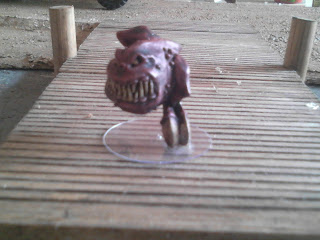 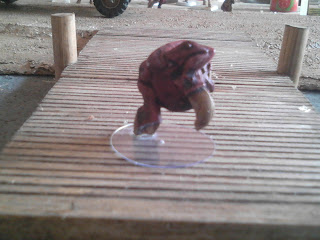 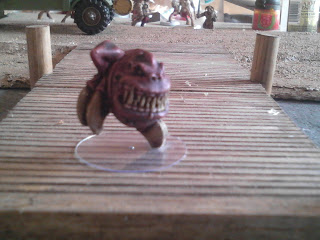 Next up are some zombies, very useful models & one's that can be used for all kind of fun games. 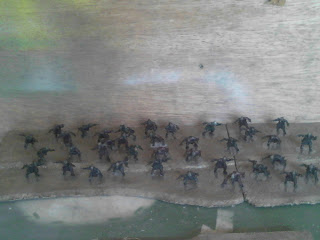 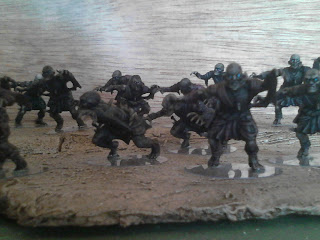 Here's a test model I did for some beastmen, I already have some & feel there some of the best models I ever painted, but they've got guns which doesn't fit what I looking for, the one below is mostly washes & I happy that there quick enough to do & look good.:-) 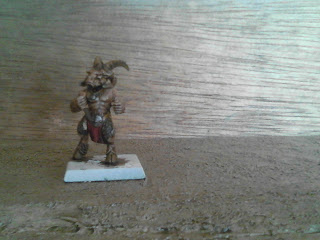 Below & indeed in some of the picture's above a little jetty  for the next perilous inland game. 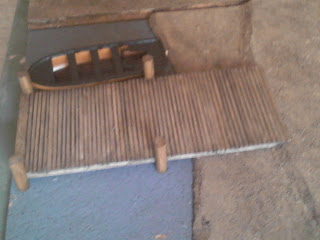 Hobby Season, one down many to go.

I got the first of my hobby challenges finished just in time for last weekends game, so by finishing one I've now matched last years effort lol, but that is no great thing as last year I was a bit all over the place, where as this year I'm a lot more focused on what I want to be doing both hobby & gaming wise. 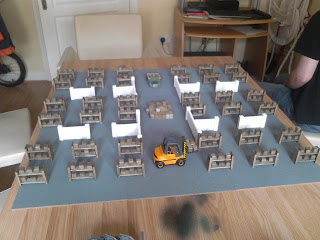 Right above is a picture of the first challenge finished but what whet into getting this done I hear you ask ? well the idea behind this one was the closing scene from Raiders of the lost ark, basically a warehouse full of crates. 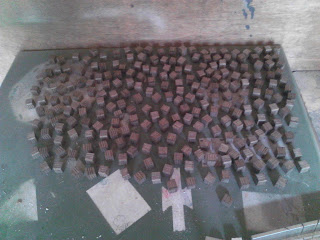 All the crates all of the time, in the picture above is roughly 250 crates made form balsa wood, the main part of the crate is cut from some 12mmx12mm with the lids cut out of a sheet, so that's 250 of eash of them to be cut & glued together, add to to that that each crate then had about 15 lines scribed into it to give it the appearance of been made up of strips of wood & that's over 3k of them. 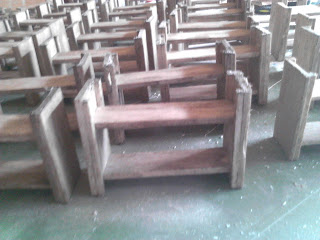 Then the shelving units to put the crates on had to be made up, there are 36 of these things in total, but we weren't finished there as I wanted some thing else to add to the endless amount of crates. 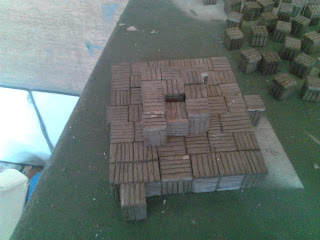 Then there was the matter of painting everything, for which I use the dark shade dip, but I didn't dip them as it wouldn't have given the effect I was looking for, so everything was painted with a brush. 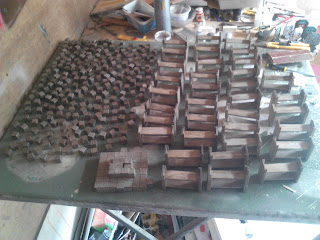 I'm sure you'll agree that that's a lot of everything lol, but we weren't finished there as all the crates had to be glued to the shelves, I also made up the wall sections for the inside of the warehouse, so all in all & job well worth a niche on the hobby season belt done list.

Well that's it for me as always my thanks for dropping in
Posted by Frank O Donnell at 9/23/2015 8 comments:

Our story continues with the search for a package to E.J. Demas from Tech-priest Darrow , which is been held in a warehouse by the custom's of  Abydos, if you are new here welcome & here's a link back to the start of our story.
http://ifitwasntforone.blogspot.ie/2015/05/tricol-first-contact.html
The shock of finding Demas unconscious & his apartment ransacked had left Elaine more then a little unsettled & the messenger who had turned up to tell Demas about the package was quite clear that the customs would not release it to anyone but Demas himself.
With little choice Panama Jack decided that there would have to be a little moonlighting done to retrieve the package that had been sent from Tech-priest Darrow as it was the only lead there seemed to be left as to his where a bouts.


Designers note, when I read background for at death door the image that came to my mind was the closing scene from Raids of the lost Ark when they put the ark into a crate in a warehouse with what looks like a million others & I knew I just had to go in that direction with the terrain for this game.

So as with every terrain project you need to keep two things in mind (3 if you in clued cost) 1 can you get it to look right ? 2 will it be suitable to play the game out on ?
In the case of both of these things you really don't know until the event its self, yes you can draw out the table layout & it will give you a rough idea, but something in 2D is very different from 3D & there is no way to play the game before hand.

The answer to the first question came just before the game when I set up the terrain, it had turned out as I'd hoped, the second answer would not be knowing until after the game, but with the game over I can say yes it did work, the only thing we changed in the game was the placement of the major plot point which when found was to be placed within 6" of the centre of the table, this in the interest of fairness we changed to it haven to stay in the central corridor, which was just under 6" wide.

So that raps up this AAR on what once again was a very close & enjoyable game with both sides taking 1 minor plot point each, I thought I could pull off the win  by just going for 1 minor & the major plot point, but Paddy seen what I was up to & reacted quickly enough to stop me, so my thanks to Paddy for the game & as always my thanks to you for dropping in.