Behind the scenes, the Graveyard

I've been working away on the set for the next game in PA's Eye of the Serpent campaign which takes place in a graveyard, but as is my way I want to be flexible with the walls that forum  the boundary, plus a graveyard is something that can be used over & over again. 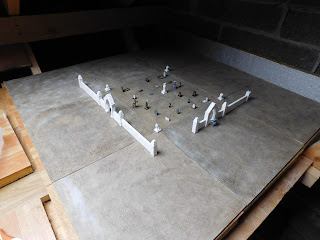 The set up is for the graveyard to be 18x18 inchs in the centre of the table , as you can see in the picture above the wall of one side is complete & another is two third's done, the plan is to have one side with a slightly bigger entrance, with each section 6 inch's long so as to be handy for storage & be flexible. 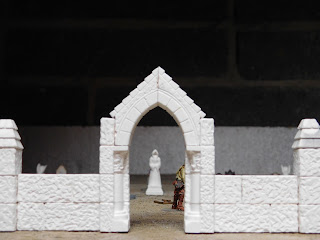 When the walls are painted I'll add little bit's of clear plastic to the bottom to help balance them
I got a little graveyard set that's 1/48th but I'm not sure if it not a little on the small size.

The statue you can see in the two pictures above will be the major plot point, while their is also 4 gargoyles that you can see part of in the pictures, I won't say much more at this point. 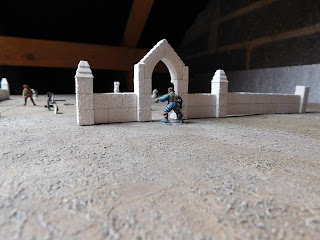 What making this set so slow to get ready is the blocks I'm using for the wall I only get a couple of in each cast, but I'm happy to put up with it to get what I want. 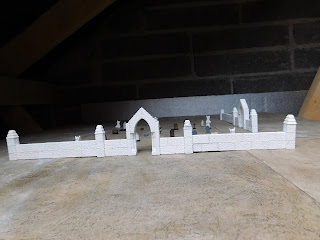 As the wall's are only 1 inch high they don't block line of sight, I've since gotten the other two entrance's built & hope that this set will be ready to use by the end of the month.

That's a rap for is post as always my thanks for dropping in & if you'd care to leave a comment it would be welcomed.
Posted by Frank O Donnell at 1/07/2017