40K sisters are doing it for themselves ?

With the new cron dex after dropping my son inlaw Ralph & I where keen to get a game of 40K in with the sisters of the Black Rose going up against the newly awakened.` 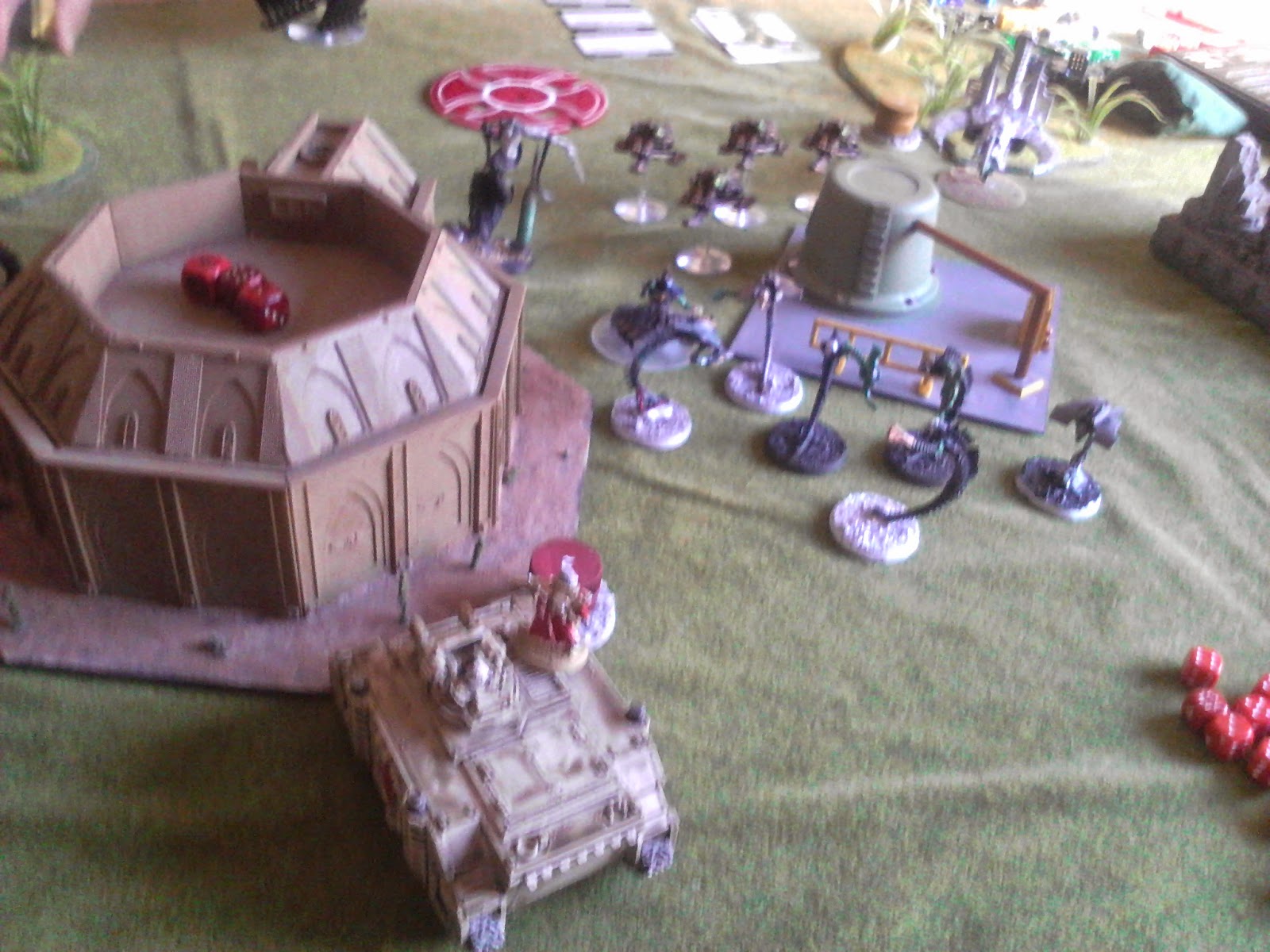 This time I decided to run an army taken only from the sisters dexs & on top of that I wanted to try one or two things out, chiefly among this was a 20 girl battle squad with Jacobus joining in with then as to give them all a 5++ sv & make them fearless, & to try to finally pay attention to what the guys rules are. 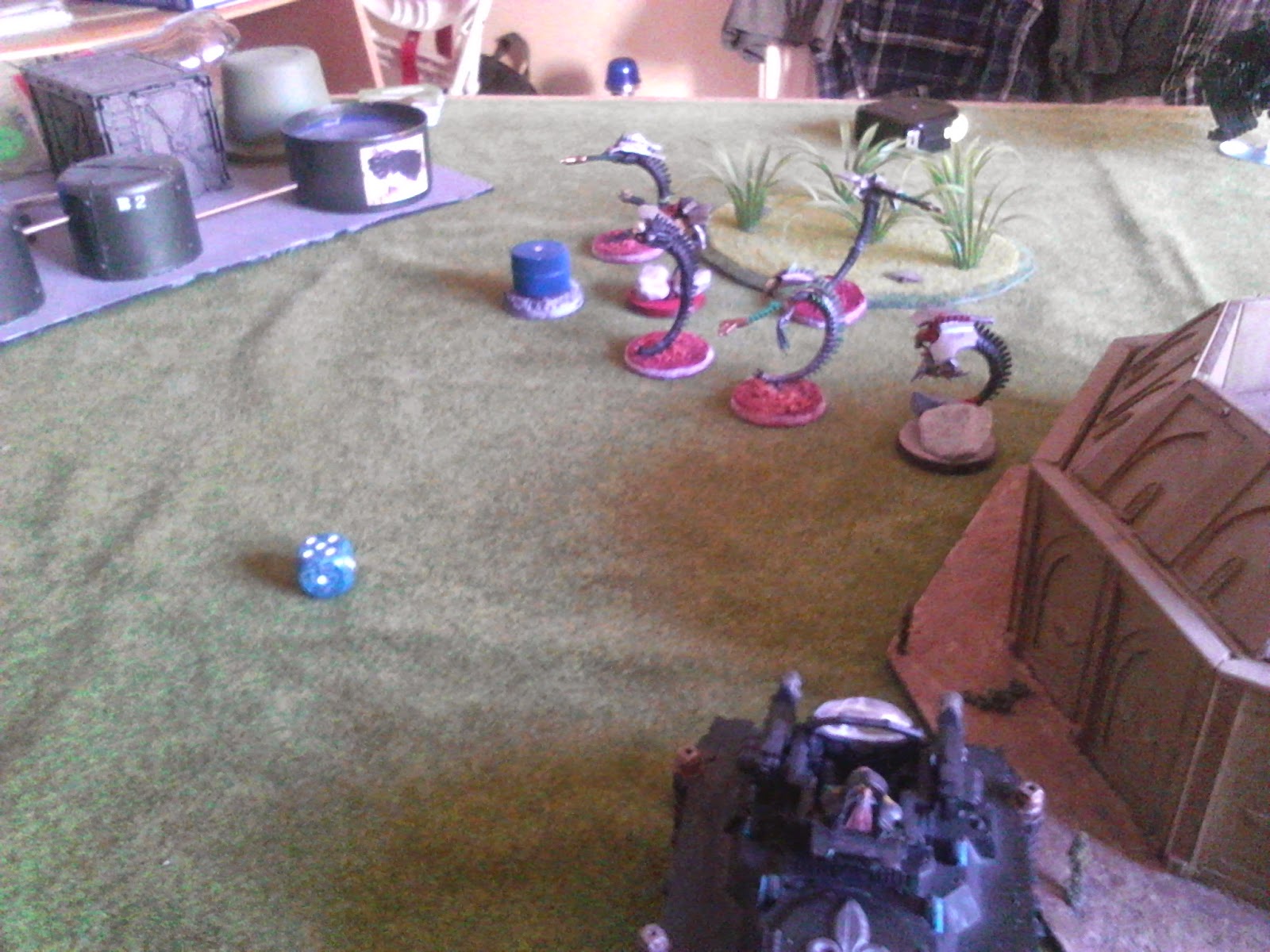 So apart from the big squad, a 10 strong squad of seraphim's & one exorcist the rest of the army was small squads of 5 sisters of different kinds packing as many heavy & special weapons as I could & all in tanks. 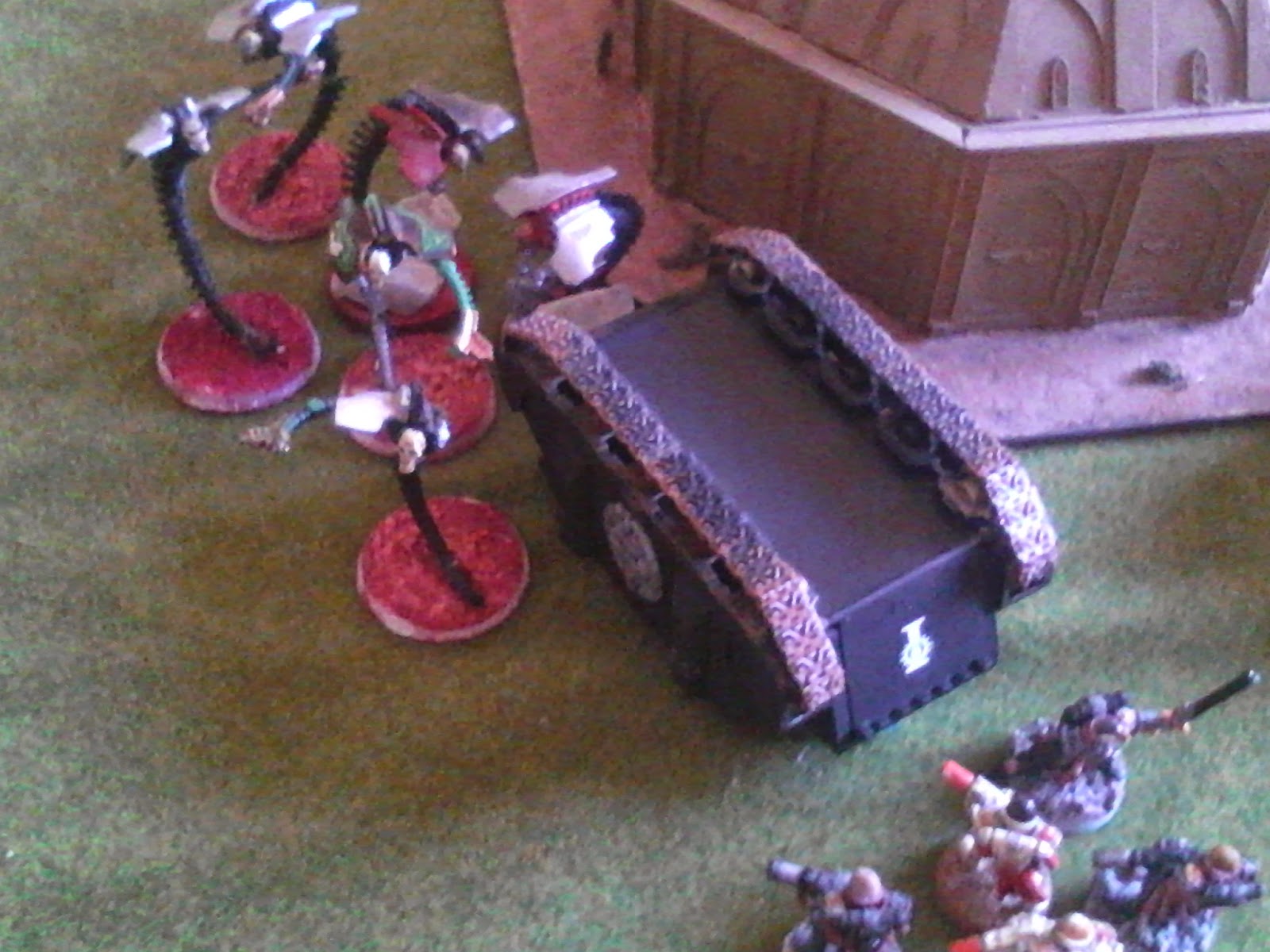 Ralph's army was very close I think to one I'd faced before with the nightbringer throwing in for good measure, so after setting things up & deploying I keep the seraphims off the table to deep strike in & deployed the rest, my first mistake I think  as in hind sight I should have gone all or held a couple of more units back, but for what my plan was for this game I should have gone with all. 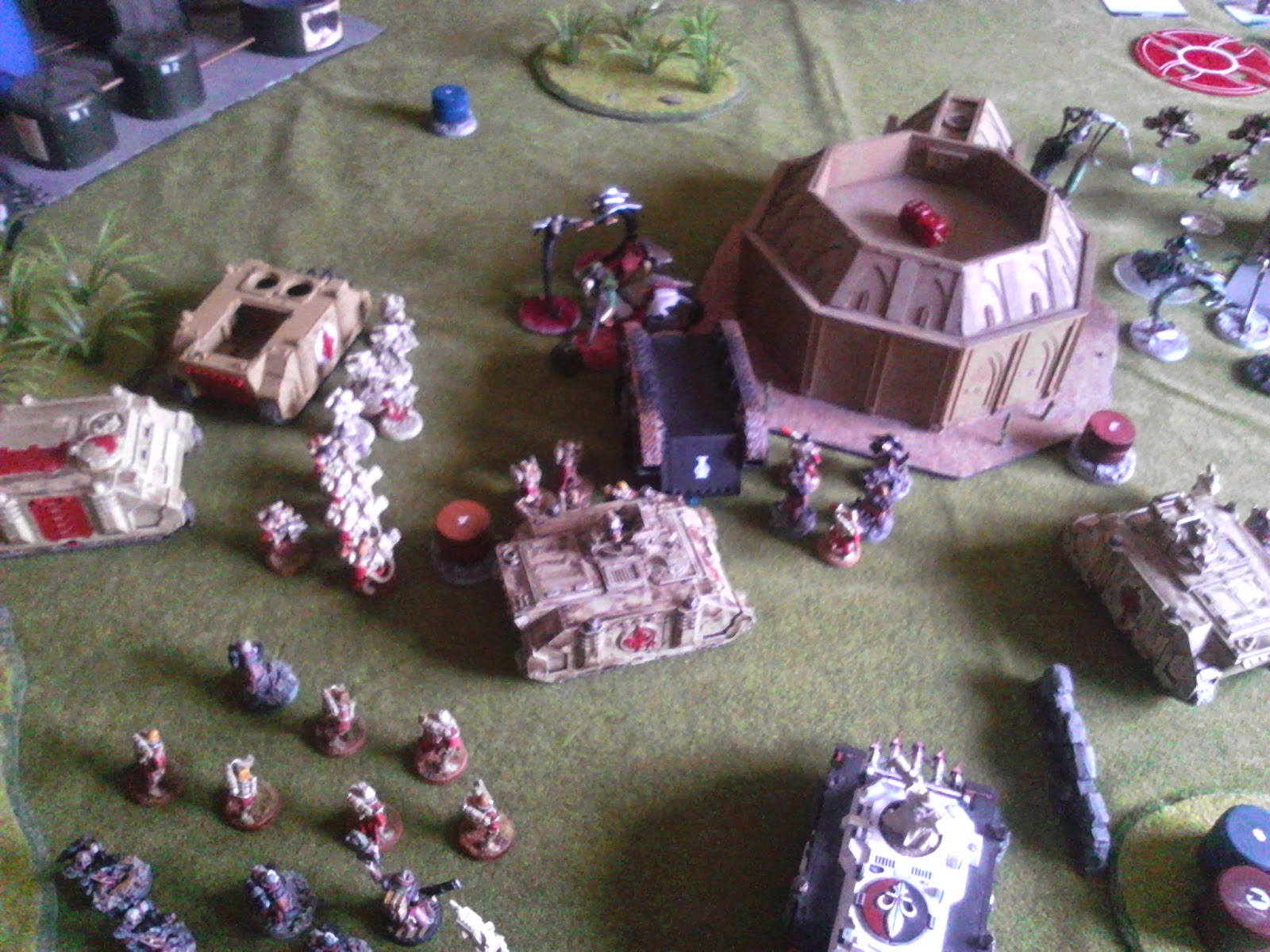 It was the mission where both players have 3 TO cards each btw, so we rolled for first turn which I won & let Ralph go first, the thinking behind this is I'm running a close range army so taking first turn can be like given away a turn of shooting & with all those wraiths Ralph was going to want to come to me. 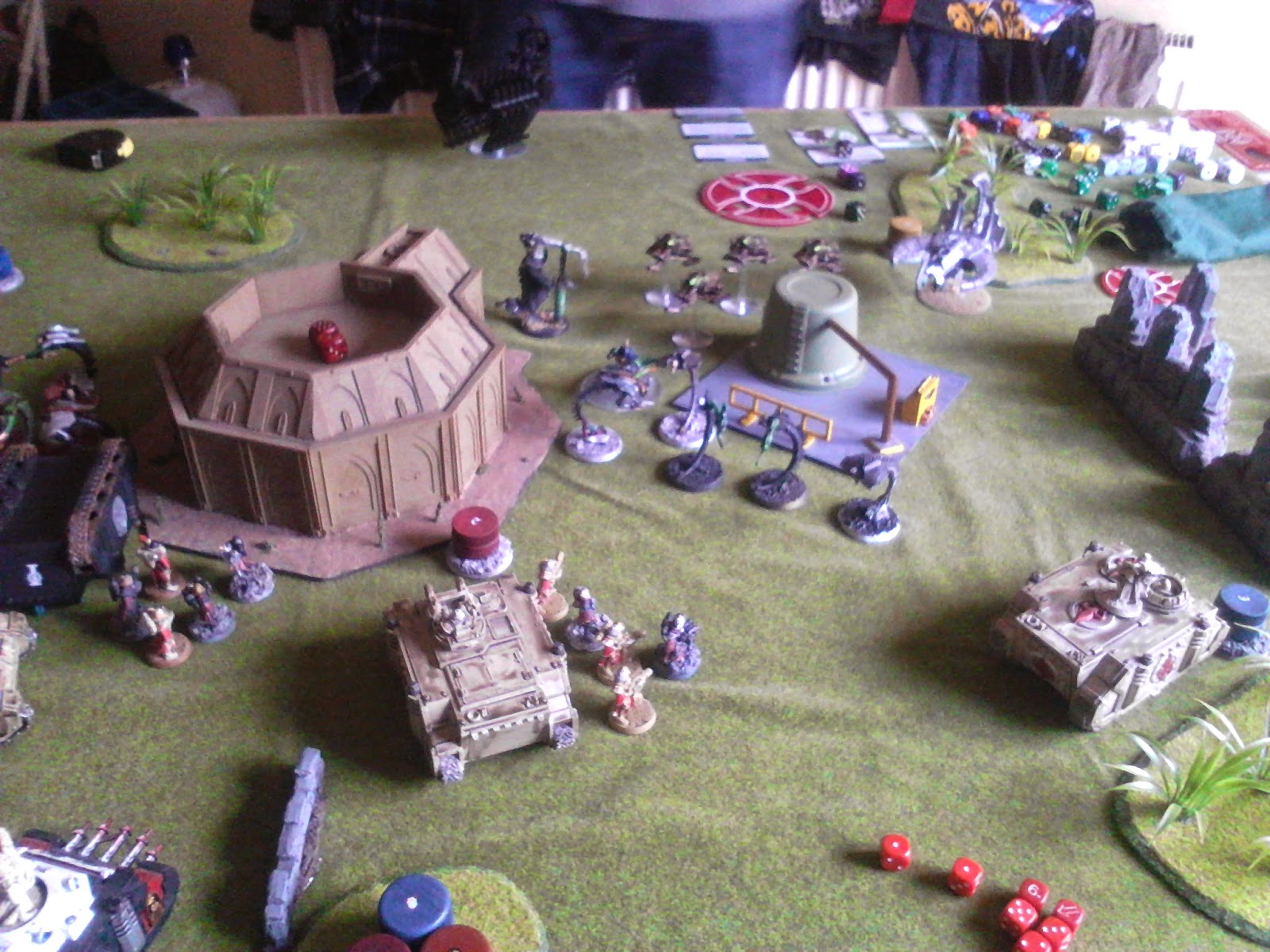 I scout two immolators forward with 4 meltas in each & wait for the crons to come on, which they did killing one of the immolators in assault but over all not a lot else happened, payback time or so I hoped but the change from T4 to T5 on the wraiths was to prove a whole new ballgame when it comes to an army like the sisters as the maltas will no longer id them, & for some reason my flamers that had proved se effective in other games just seemed to wash over them & through the wall of frame they came.

2-1 to Ralph I think after the first turn, turn 2 seen 1 of Ralph's 3  flyers come on & Ralph done his moving & his shooting but it didn't do to much but I want to bring up the nightbringer at this point who apart from have that shooting attack that he rolls on a table for also has a gaze of death pick an enemy none vehicle unit within 12" roll 3D6 & for very one over the units LD they take a wound with no armour or cover save & if the unit losses a model the nightbringer can regain 1 wound if he has lost one. 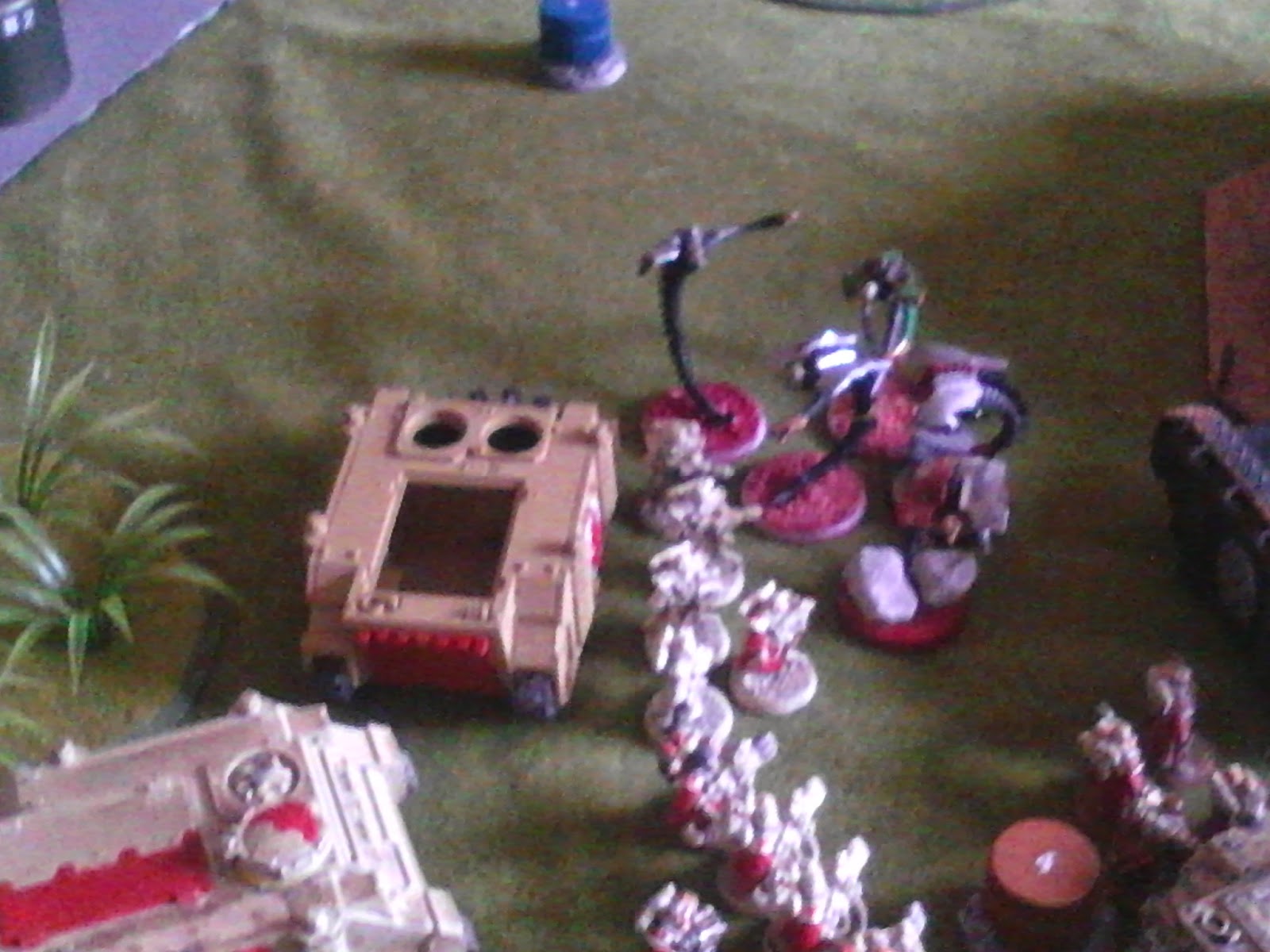 Now the reason I wanted to bring that up was I think it raises a couple of questions, can he target a unit in assault & can he target an invisible unit ? fun times a head with this me thinks, anyway back to the show the d-lord had split off from one of the squads of waiths & mashed into a rhino with 5 sisters in it that had gone to grab an objective last turn, while both of the wraiths hit a squad each, one of which died but in the other one two brave sisters held on under the bravely. 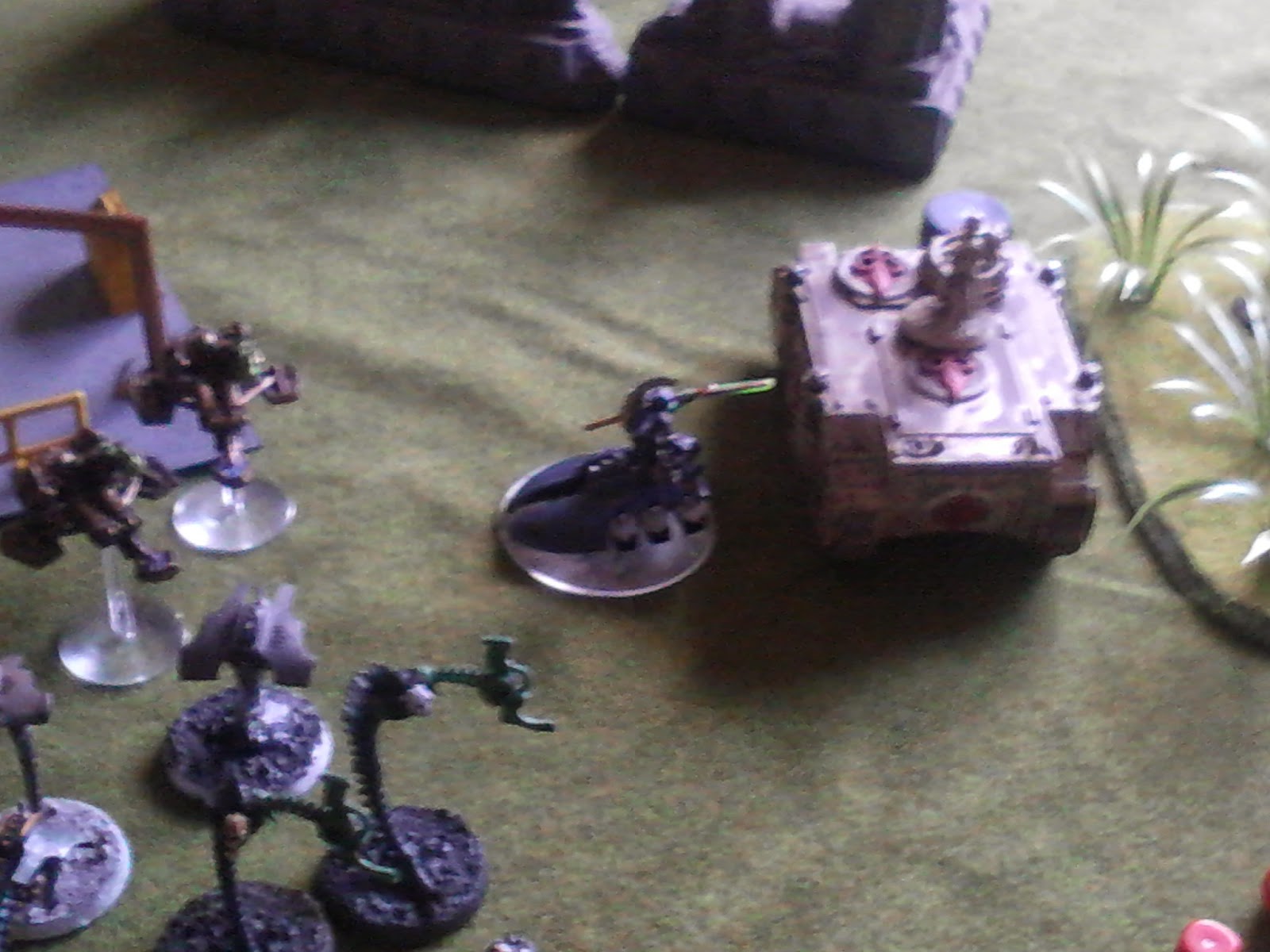 My turn two & I knew I was in trouble, I tried something & it just hadn't worked time for a plan B, so after I got some of the squads back into their tanks & once again some poor shooting even from my seraphims who had pulled off a brave deep strike & got off their act of faith for shred, I could only hope to play the objective grab game. 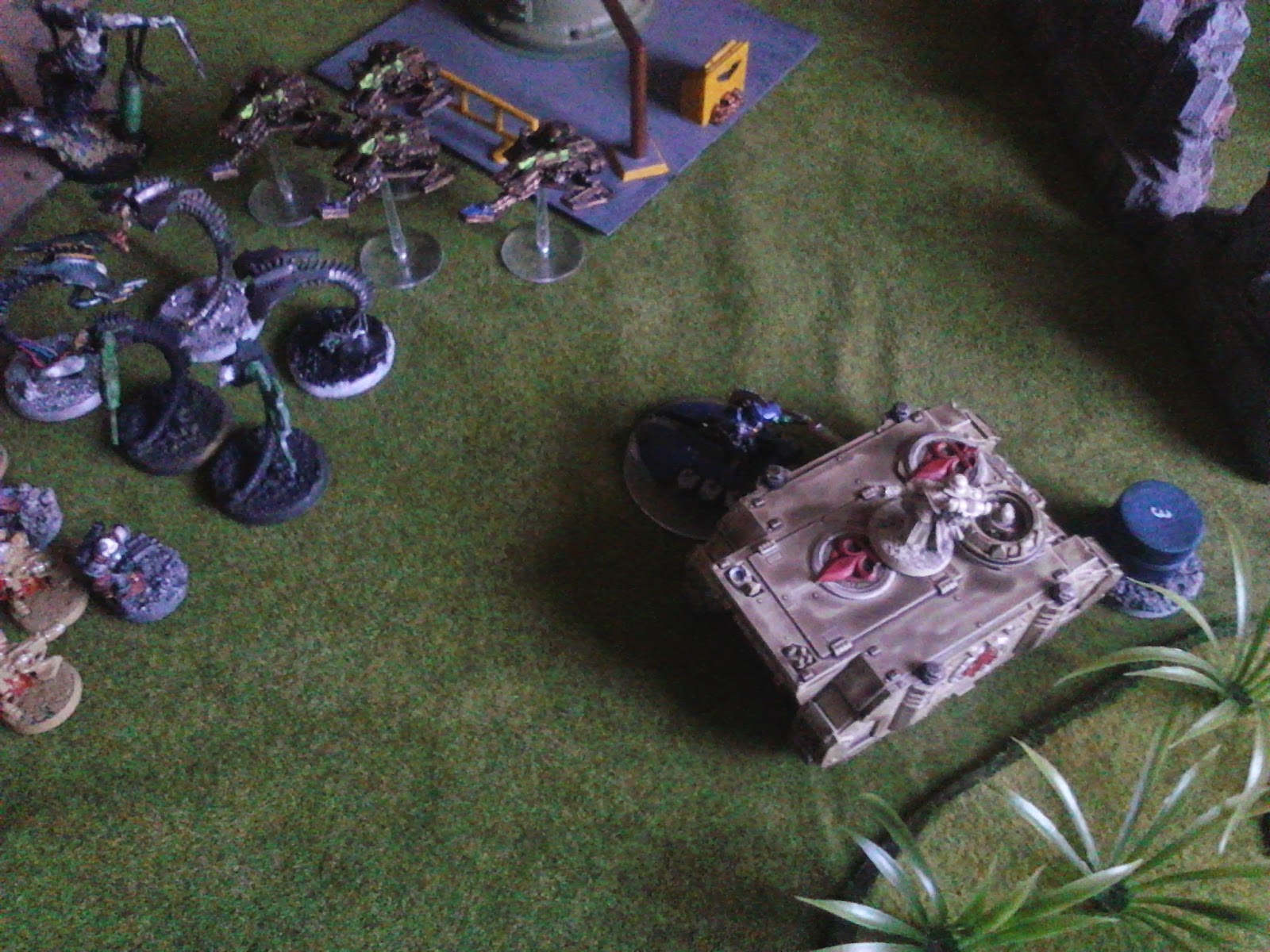 To try to keep some of the wraiths busy I charged one of the unit with Jacobus & the 20 sisters, been able to reroll save meant I should tie them up for awhile, after this turn I think it might have been all square at 3-3 but this was as good as it was to get for the sisters. 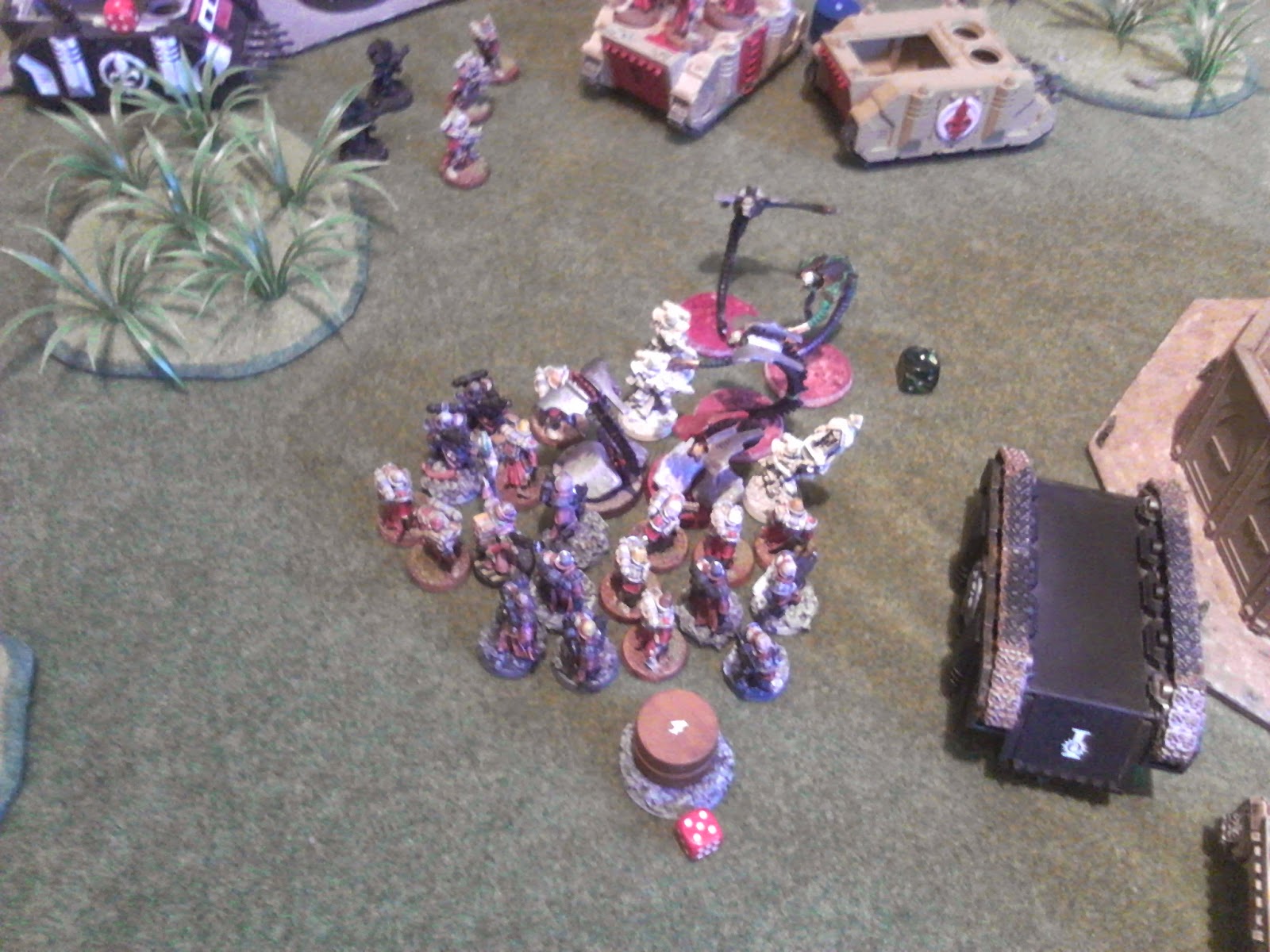 The rest of the game seen me play gorilla warfare tactics of hit & run while try to pick up scores off objectives while the cron set about taking my army apart my army piece by piece, people might be saying that tesla is fixed but when your taking 8w from 4 shots its hard to agree LOL 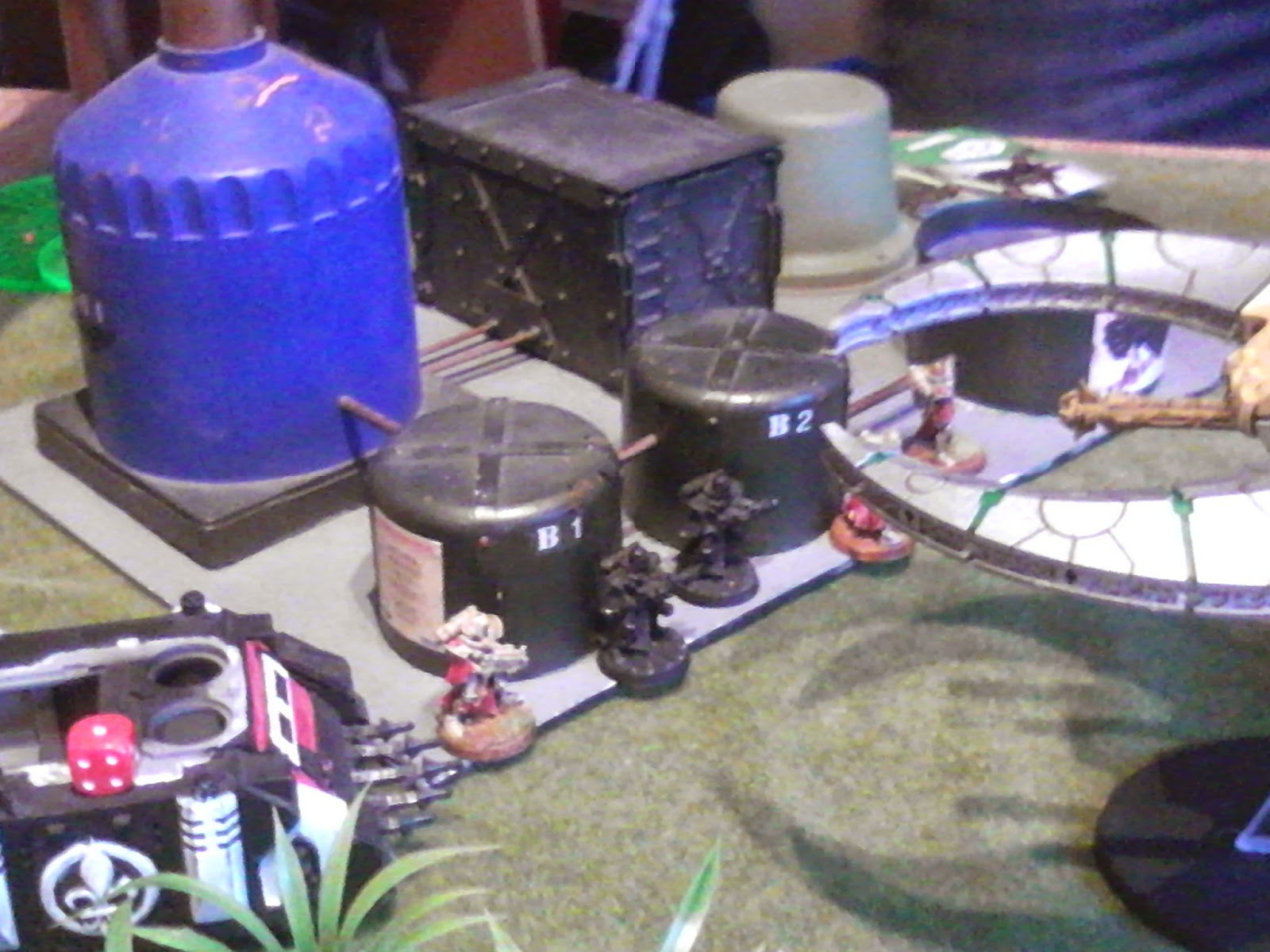 Turn 5 & the game came to an end which was the only thing that stopped me getting tabled tbh, Ralph had score 11vp's to my 8vps but don't let that score line fool you this game was never that close, so in conclusion the plan I tried didn't work out at all but that's fine as long as I learn from it & move on, the extra T on the wraiths is a huge plus for them but as someone who believes that this is something that needs to be done to the mid-size nids I'm not complaining just hoping. 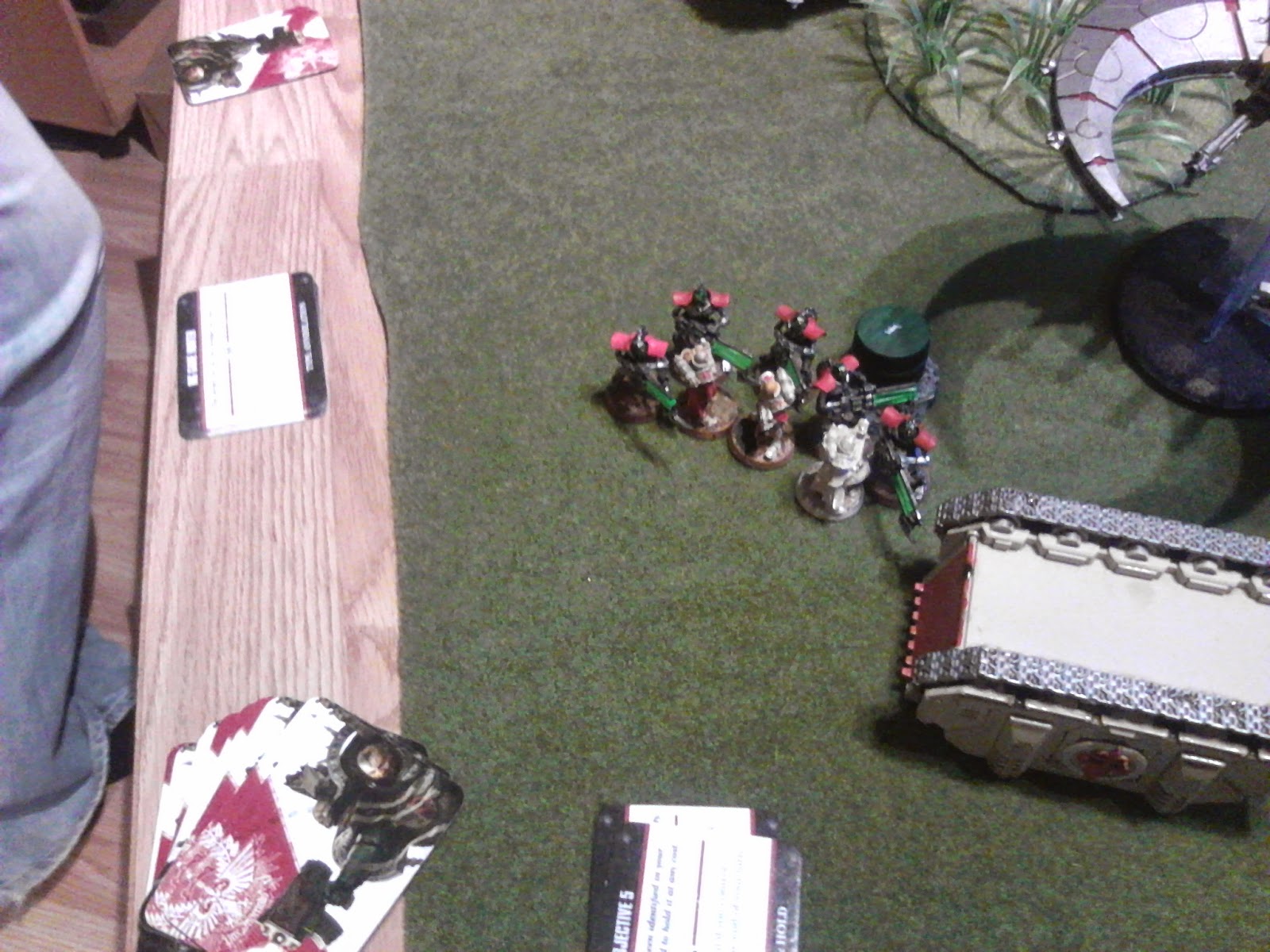 Even in getting that sound beating that I'd I'd said was bound to come is my post on the game with Alan, I really enjoyed this game & found Ralph's army a fun one to go up against as it had a bit of everything & I look forward to facing them again, as for the sisters been able to do it for themselves ? well this is early days & I'll push on trying to find out, so my thanks & well done to Ralph & my thanks to you for dropping in.