40K holding out for a hero


The game we'd played was one that Mike & myself had spoken about playing a long time back but had never gotten around to playing, it's a mission from the Iyanden supplement recreating a battle between the Eldar (Mike) & the nids (me). 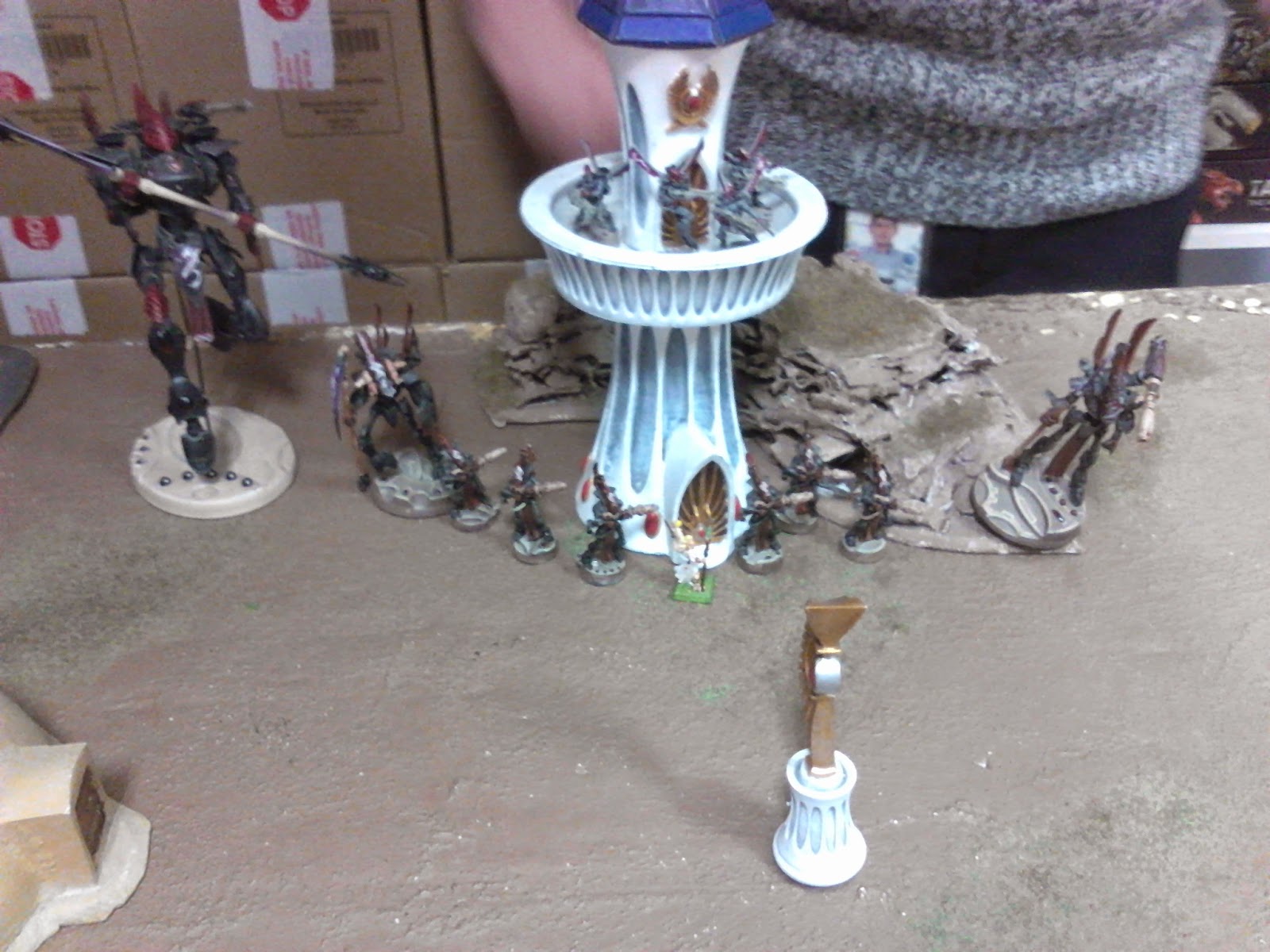 Now this mission is a fluff mission & must be entered into in that frame of mind, as the nid play to have a tyrant that is T10 with a 2++sv , the Eldar player has to take a couple of named character one of which has a weapon that can wound the tyrant on a 2+ & the tyrant gets no save, as you can see it just says a tyrant nothing more so how would the game work if I gave him wings ? or if Mike decided to run a load of serpents. 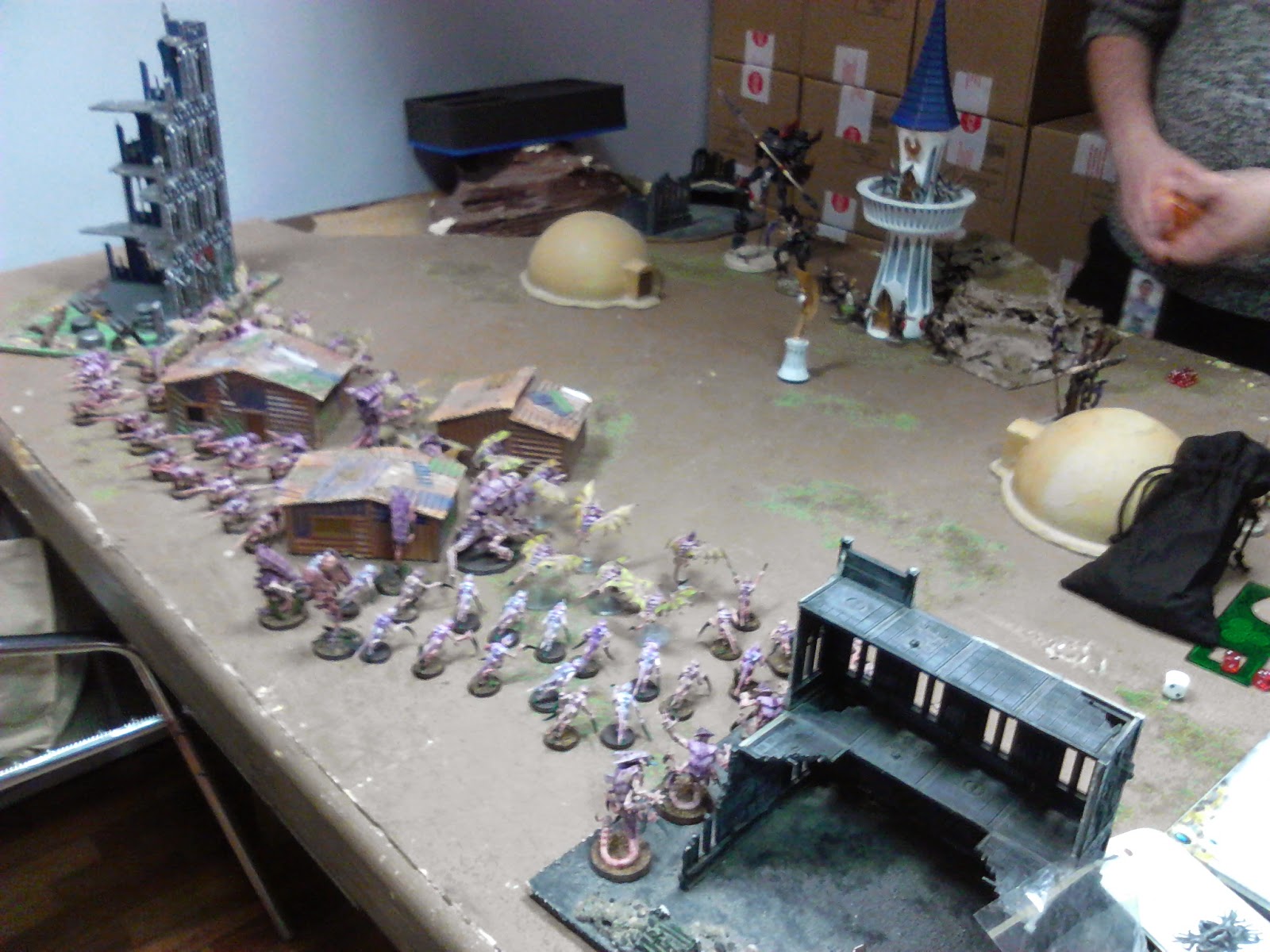 Luckily we both have a bit more about us then that, so I took what was a well round nid list with a sprinkling of poison, while Mike had awakened many of the Eldar dead to stop the nid onslaught, plus a certain  pirate prince & his crew who had to go into reserves & would turn up on turn 3. 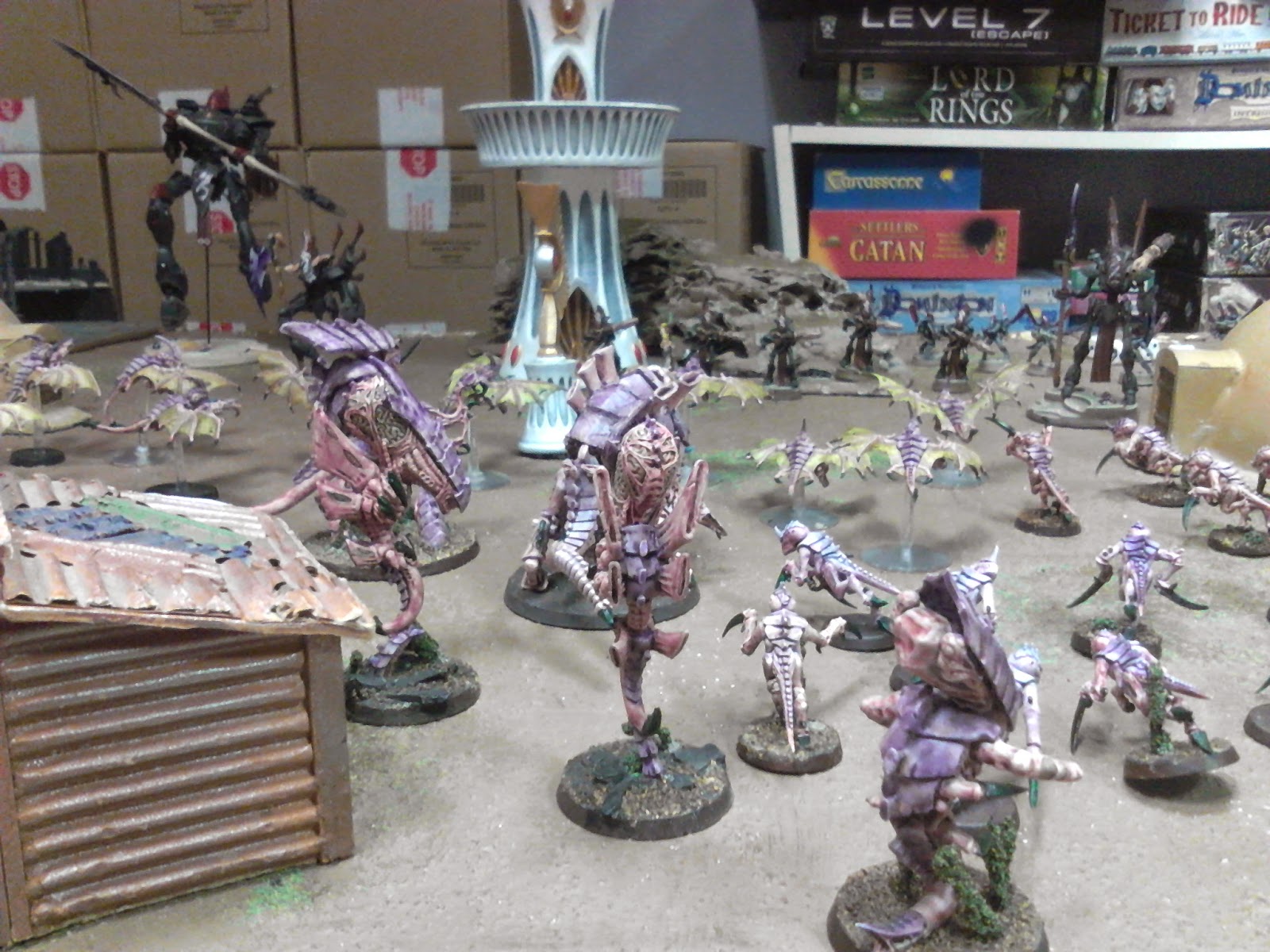 So we came to me rolling off on the nid warlord table, first roll something that was all together useless, second roll see my tyrant getting fnp after he takes his first wound just the thing a T10 2++sv models needs, so taken a leaf out of GW's book & making our own rules we decided to give him the out that made synapse 18" how fitting for a super nid. 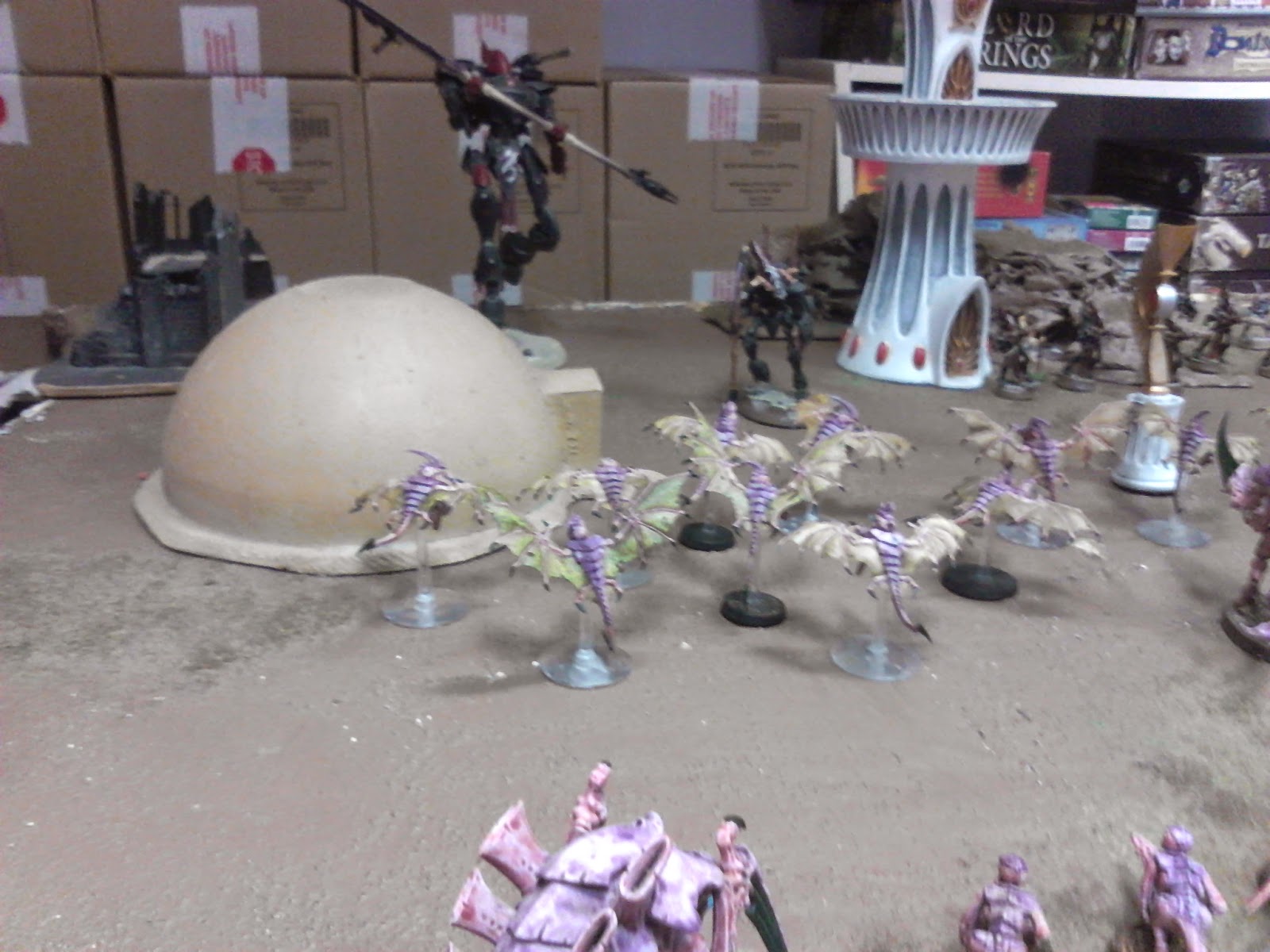 Deployment seen Mike set up around an Eldar tower, with me setting up as close as possible to him as I could, First turn didn't see a lot happen (but did see something happen that is very rare), with Mike moving a bit then going to the pp stage & taken a perils not very Eldar like at all, his shooting saw him kill a few goyles & that was it. 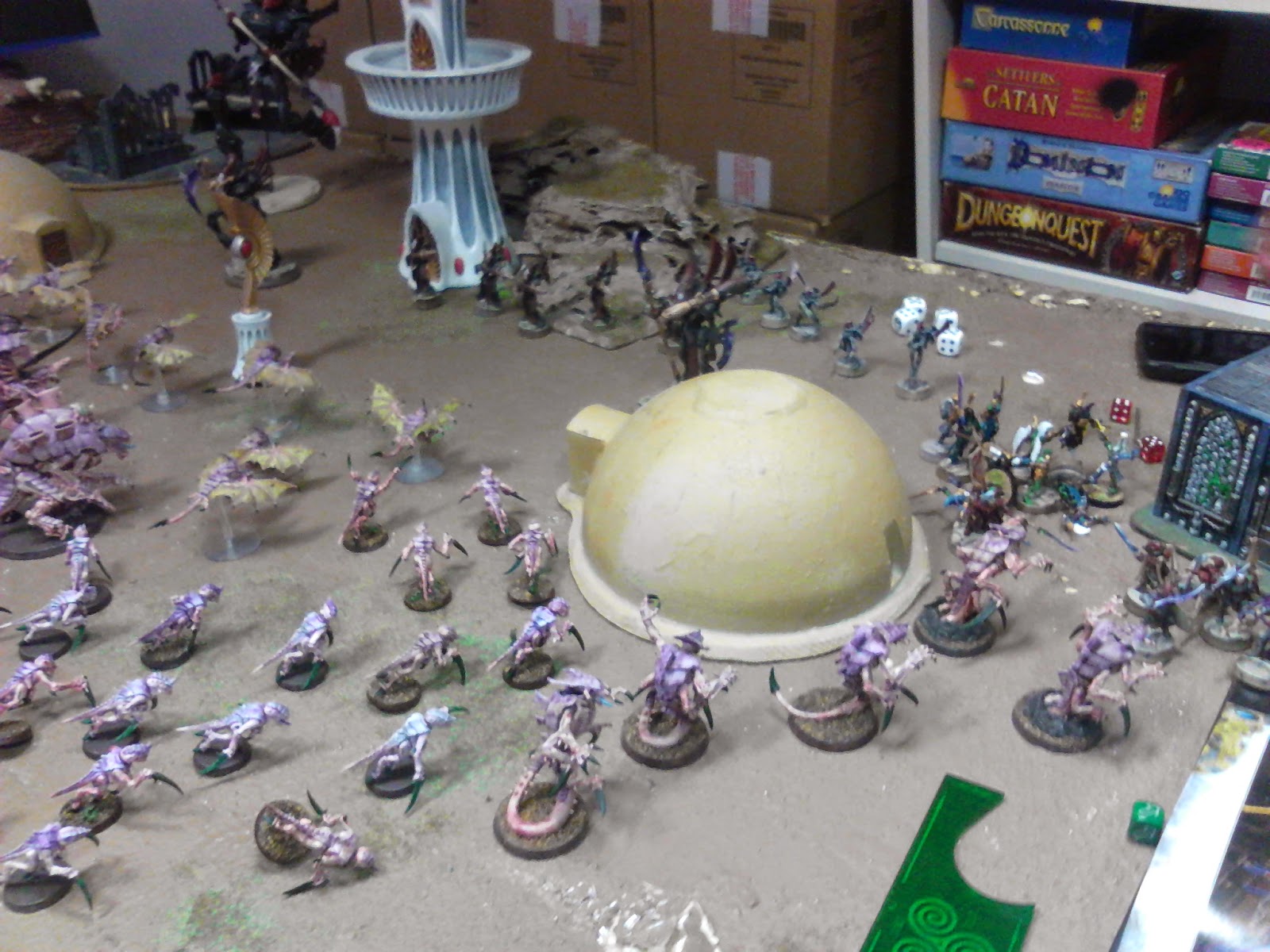 Like wise my first turn was none eventful with me just getting a little closer, I think one model shot & everything else ran. 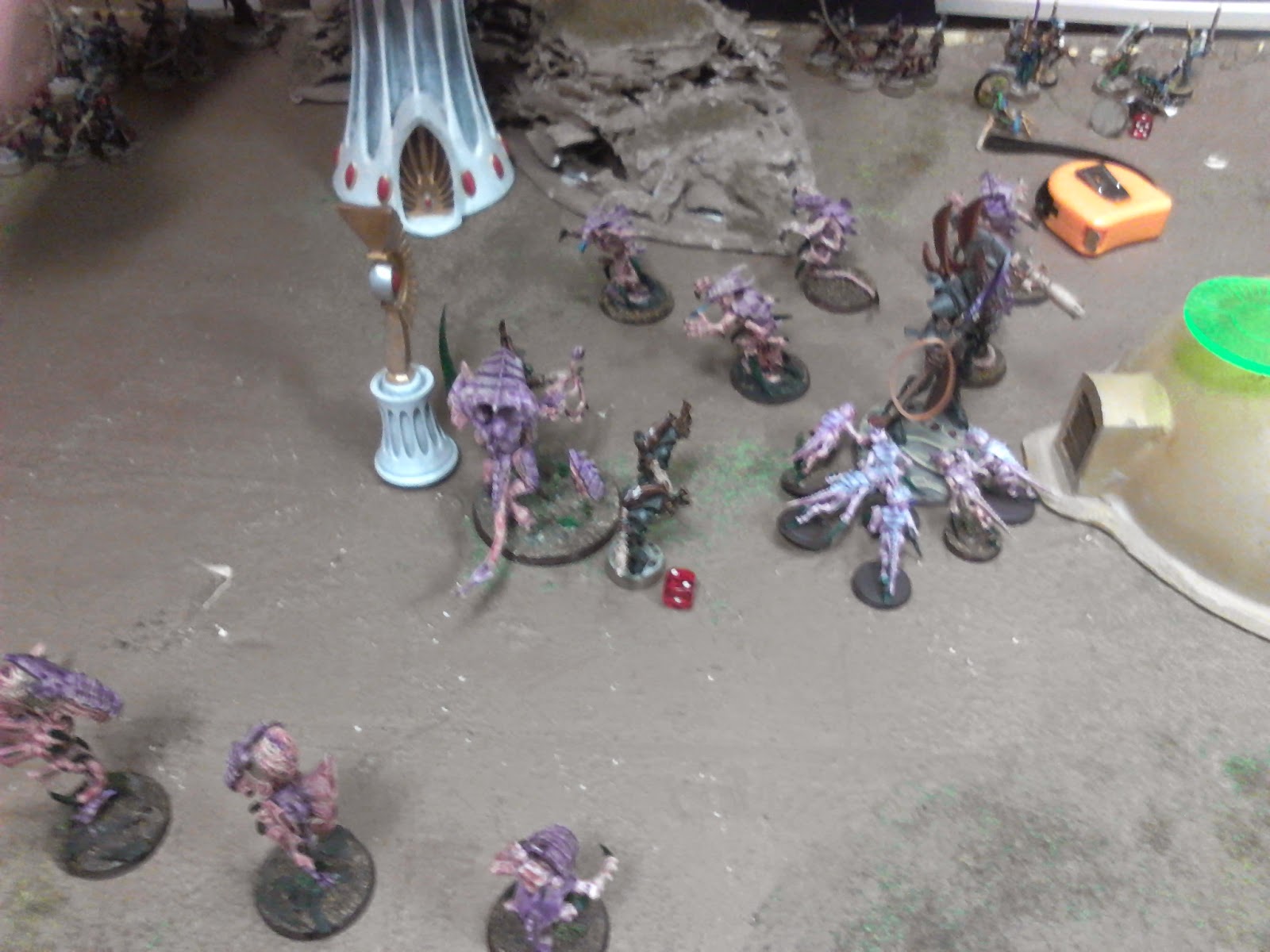 Turn two & this is where the game exploded to life with Mike taking out the goyles for first blood & putting a end to the dakafex for good measure, while also putting a big hole in the swarm or guants. 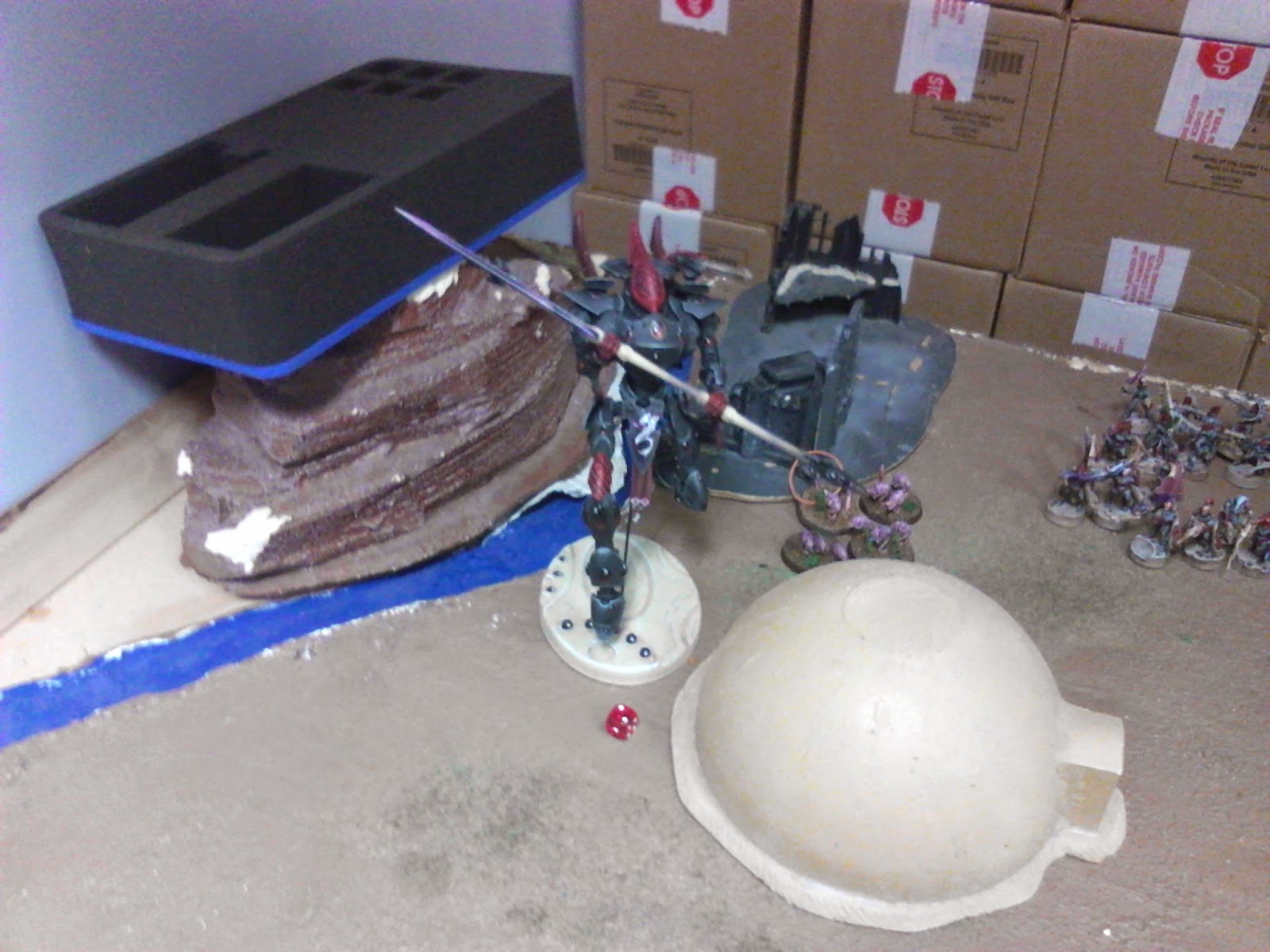 My turn two seen the rippers turn up & miss the mark by only 11", me use some pp with my zoans to put some hurt on one of the Wraithlords who I would finish in the shooting phase & then I was assaulting, the dice gods could have seen fit yo ruin  our game there & then as a 6 fallowed by a 6 from Mike fallowed by a 1 from from me would have seen a dead tyrant & believe me when I tell you I'v been in  this game long enough to have seen many an unlikely dice rolls. 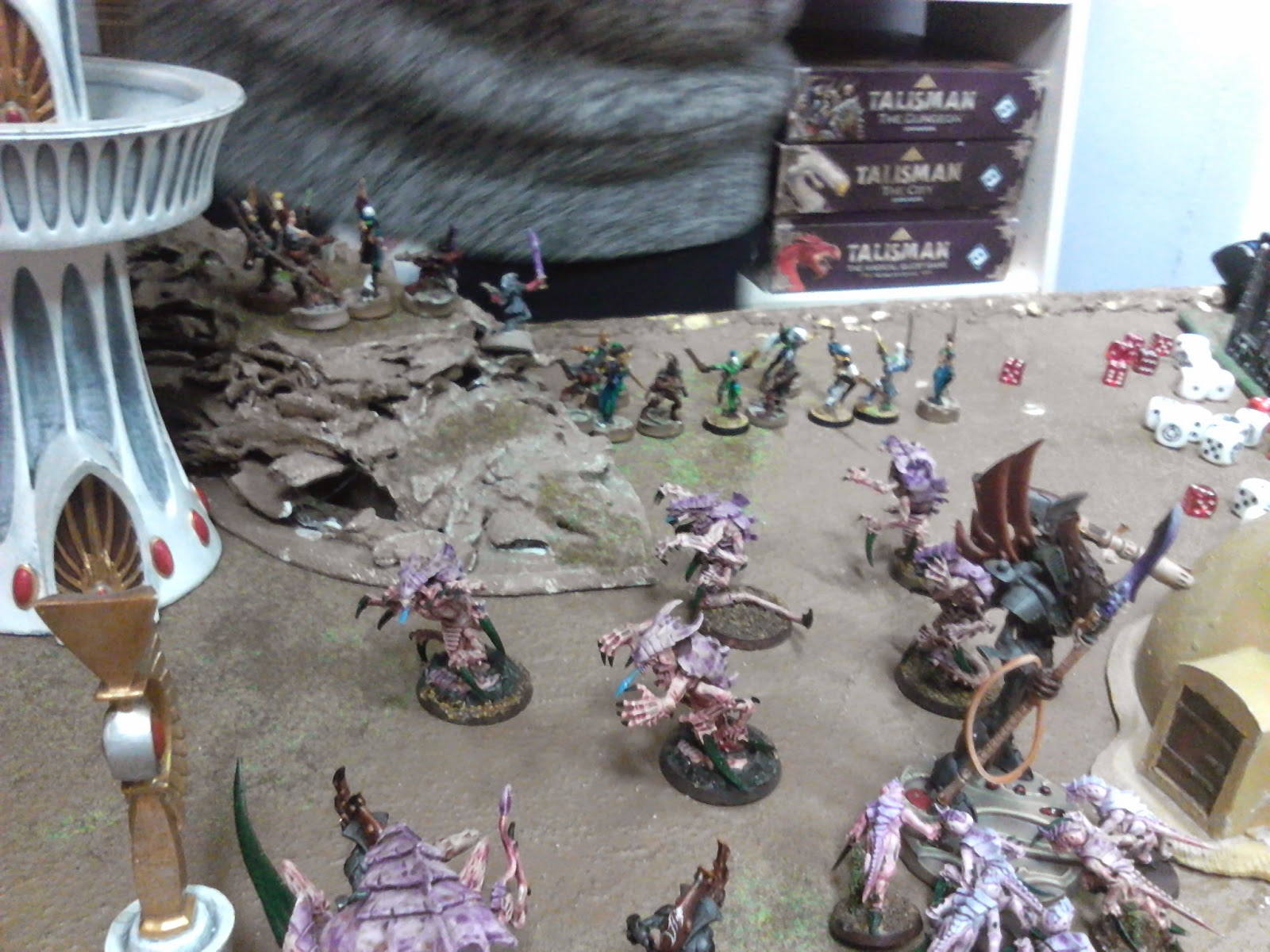 The gods decided to smile on us & we came to turn 3 & the hero ? of the hour turning up, so more things been wiped out from shooting & Mike pulling off a major double assault with a roll of 11 thanks to a little help from the harlequins fleet, but they would pay of that at the hands of some devourers, but I'm jumping a head a little, as Mike's wraithknight charged my exocrine & my tyrant killing the last of the wraithguard & consolidating over towards Prince Yriel. 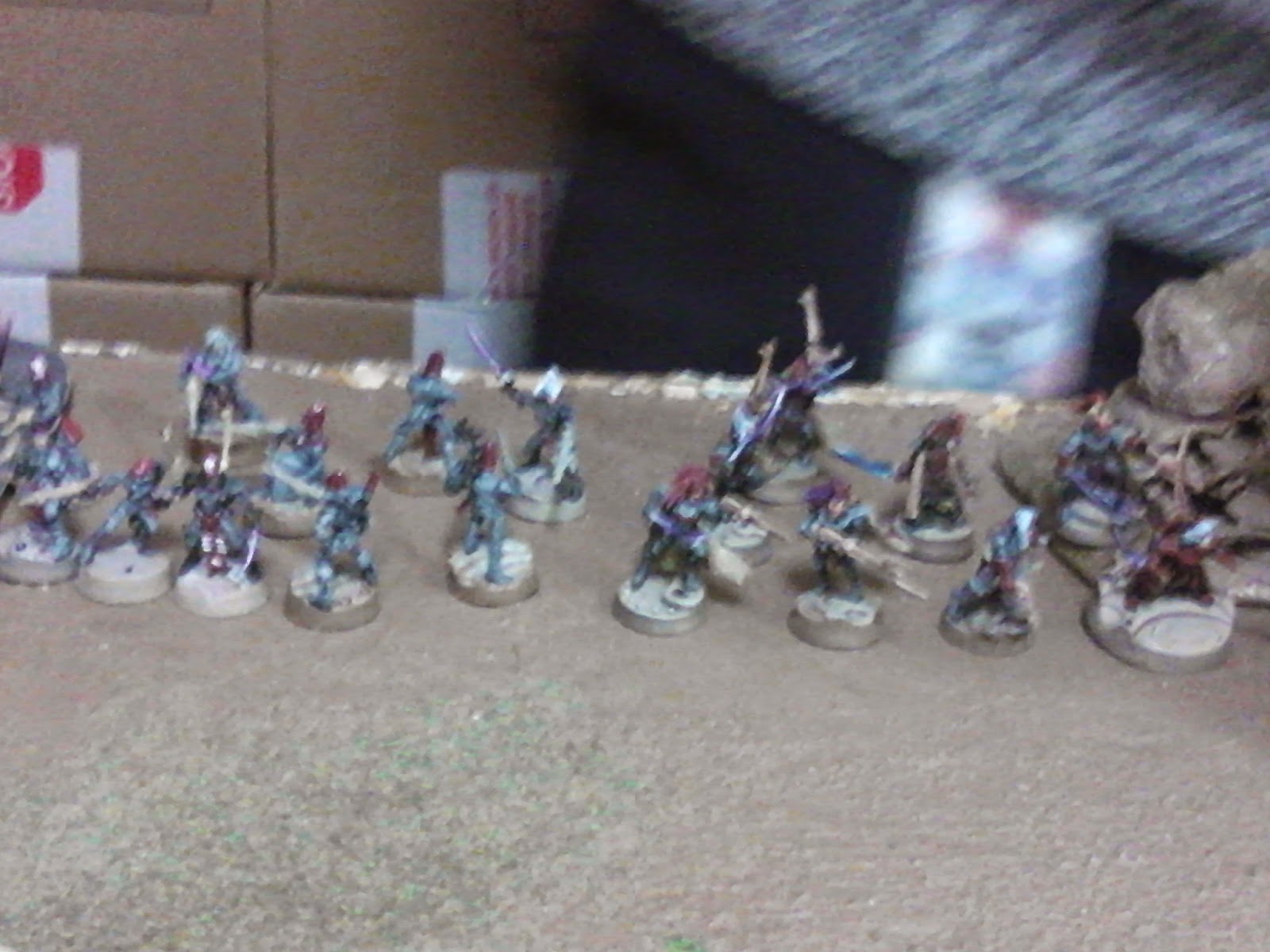 But for all this I couldn't help but feel that both Mike & myself where just seen all this as a backdrop to the main event which was to now come, as after getting off some more pp's to finish off the other wraithlord & wiping the the smile off the harlies faces, the hive tyrant charged into the squad of the Eldar Prince & the epic brawl was a foot. 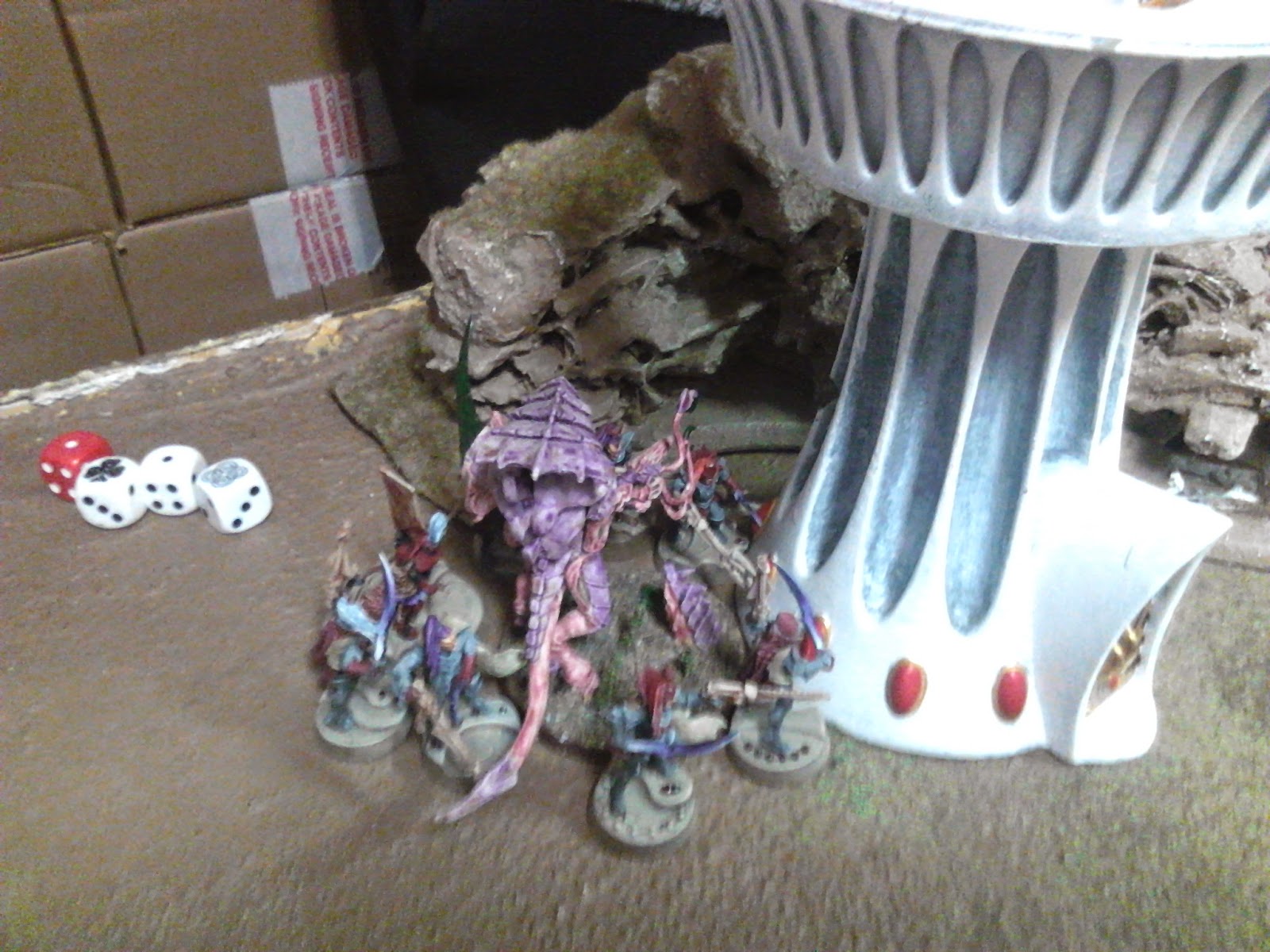 Mike's one worry for this game was that Yriel would put a couple of wounds on the beast & then stuffer an instance death wound, which in all fairness is what should happen, now I have to add here that a thing I would never had though would ever happen did, with me for whom the Eldar have been the bane of my 40k life & who I have gone on record many a time to state that I've a pet hate for them, found myself half hoping that the little prince might defie the odds to win the day 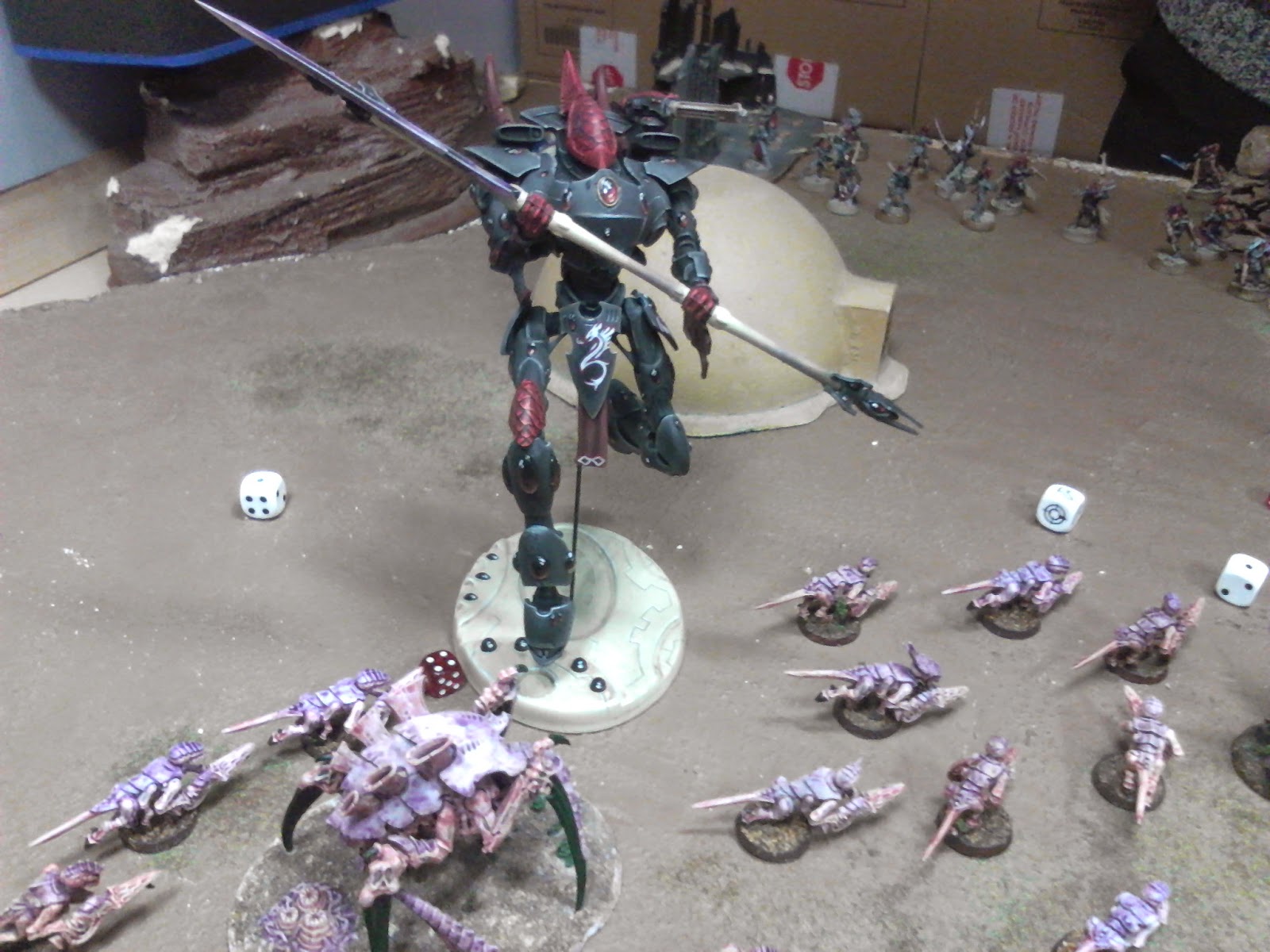 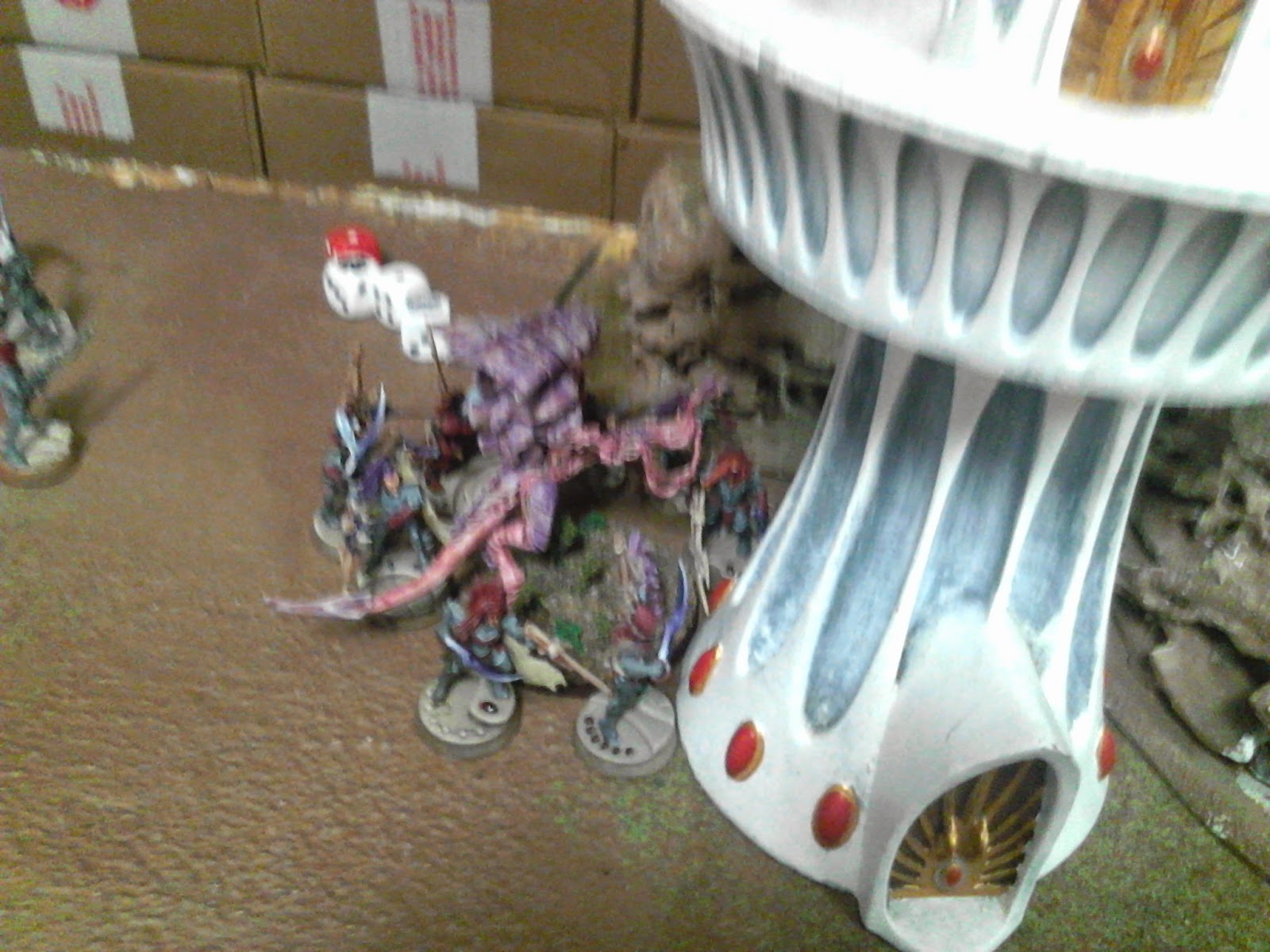 this blog has it's name for a very good reason, yes my friends you guessed it snake eye's & Mike & I do a high five lol.

Turn 4 Mike is now on the up & putting the pain on what's left of my army & puts the might tyrant to the sword in his assault phase, in fairness he'd only one wound left as the rest of the squad had also put a wound on him in the last assault phase, but the hero wasn't safe yet.


My turn 4 & my mawloc that had decided to have a lie in turns up from beneath the ground, I place the template on Yriel's head & roll the dice a hit with 5 models under the blast, so 2's to wound no 1's this time & as the Eldar hero is the one under the hole we start with him (pay back time).

Mike does his look out sir's & fails one, it's 50/50 as Yriel has a 4++sv. he make's it & the other 4 are dead, oh but I'm not finished yet as the rules are that if all the models are not removed you put the template down & try again.

Conclusion, this game in a lot of ways felt more like a 4th ed game then one from 7th if I'm honest about it, but it was a lot of fun none the less & proved what I believe is the truth about 40K & it is this, 40K is still one of the most enjoyable games around when played by two people looking for the same thing.

But it never plays like the fluff I hear you say, well me answer to that is that in this game at least I fought the fluff & the fluff won, Mike was holding out for a hero & boy did he ever get one, so well done & my thanks to Mike for what was really a great game of 40K & my thanks to you for dropping in.