Back in the deadzone

I got my second game of deadzone in the other night & again I used the enforcers in fact the very same list that I'd used in my first, I think when your only starting to play a game it helps to stick to as much as you can to the same things while you get a handle on the rules. 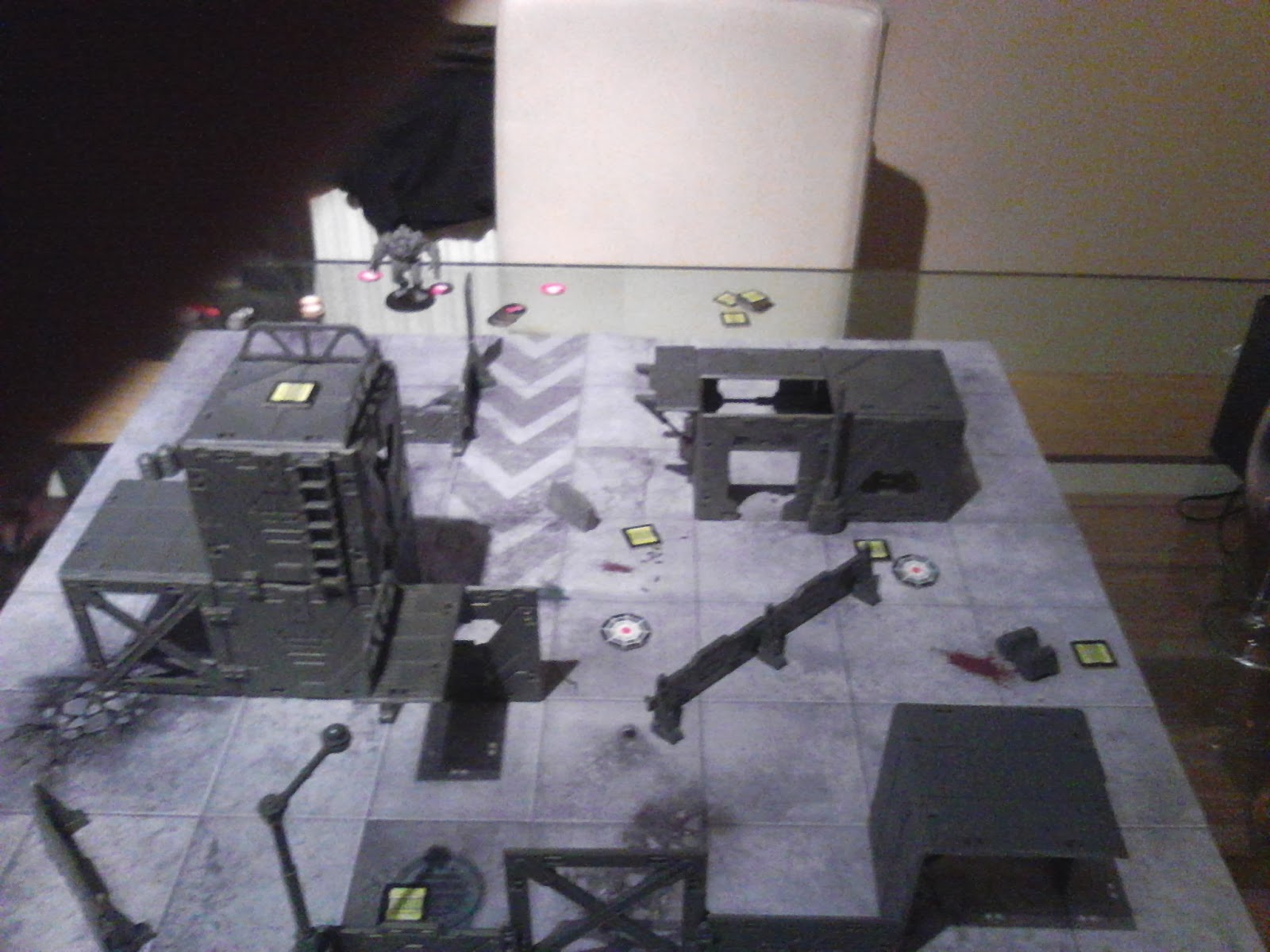 So my list was bossman, missile launcher guy (ML here after) heavy machine gunner (HM here after), an assault guy & a normal guy, well you don't get much for 70 points these days lol, plus I wanted to try to work out away of trying to use them as a squad which was something I really didn't do right in my first game. 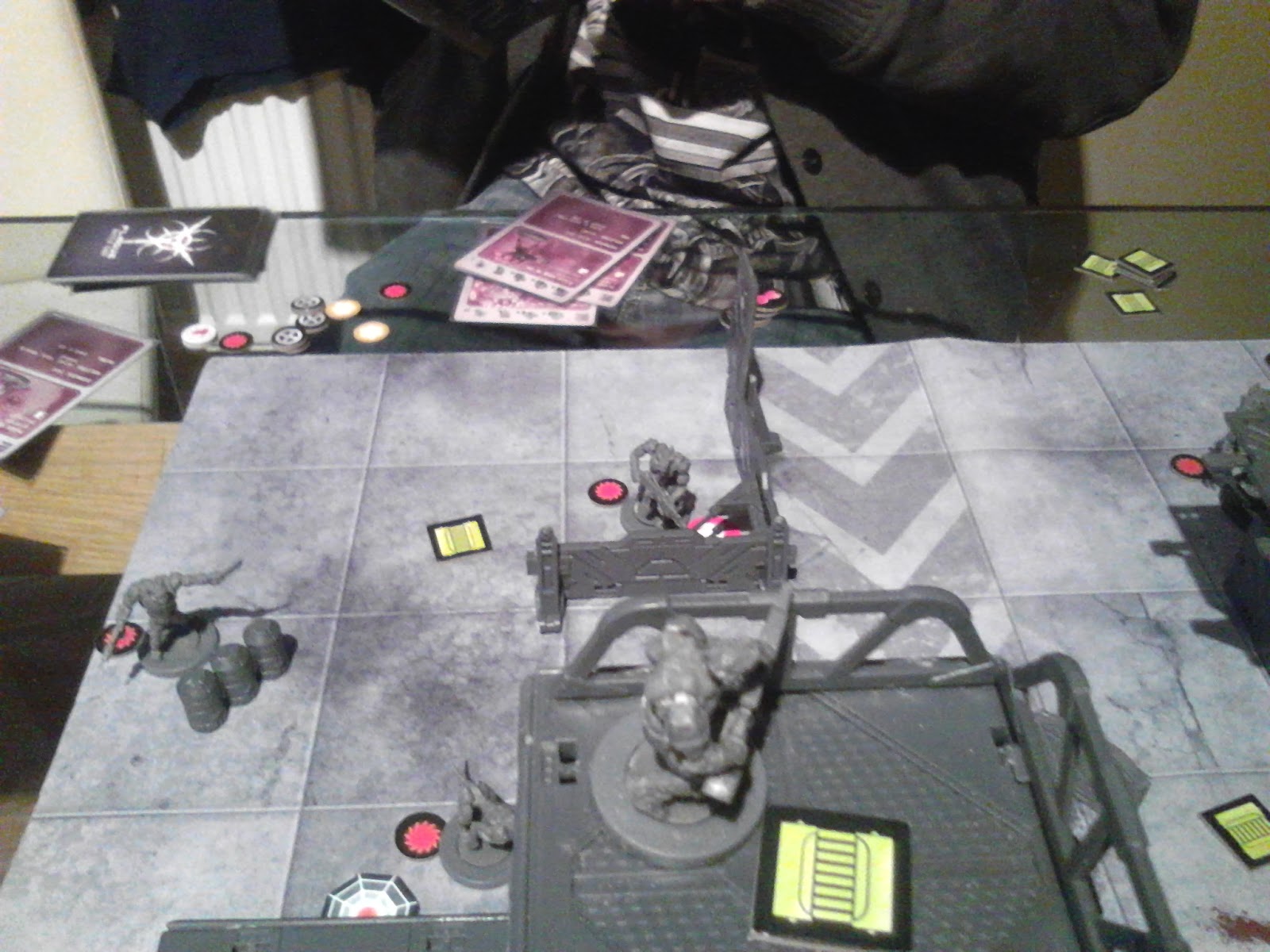 The mission card I pulled first I didn't fancy so I put it back & picked another which was more or less the same, so what was the plan I hear you ask ? well I wanted to get the HM gunner up onto the highest piece of terrain for good alround fire power, the ML guy & normal guy would hang back in my deployment zone to give cover fire while the bossman & the assault guy pushed forward. 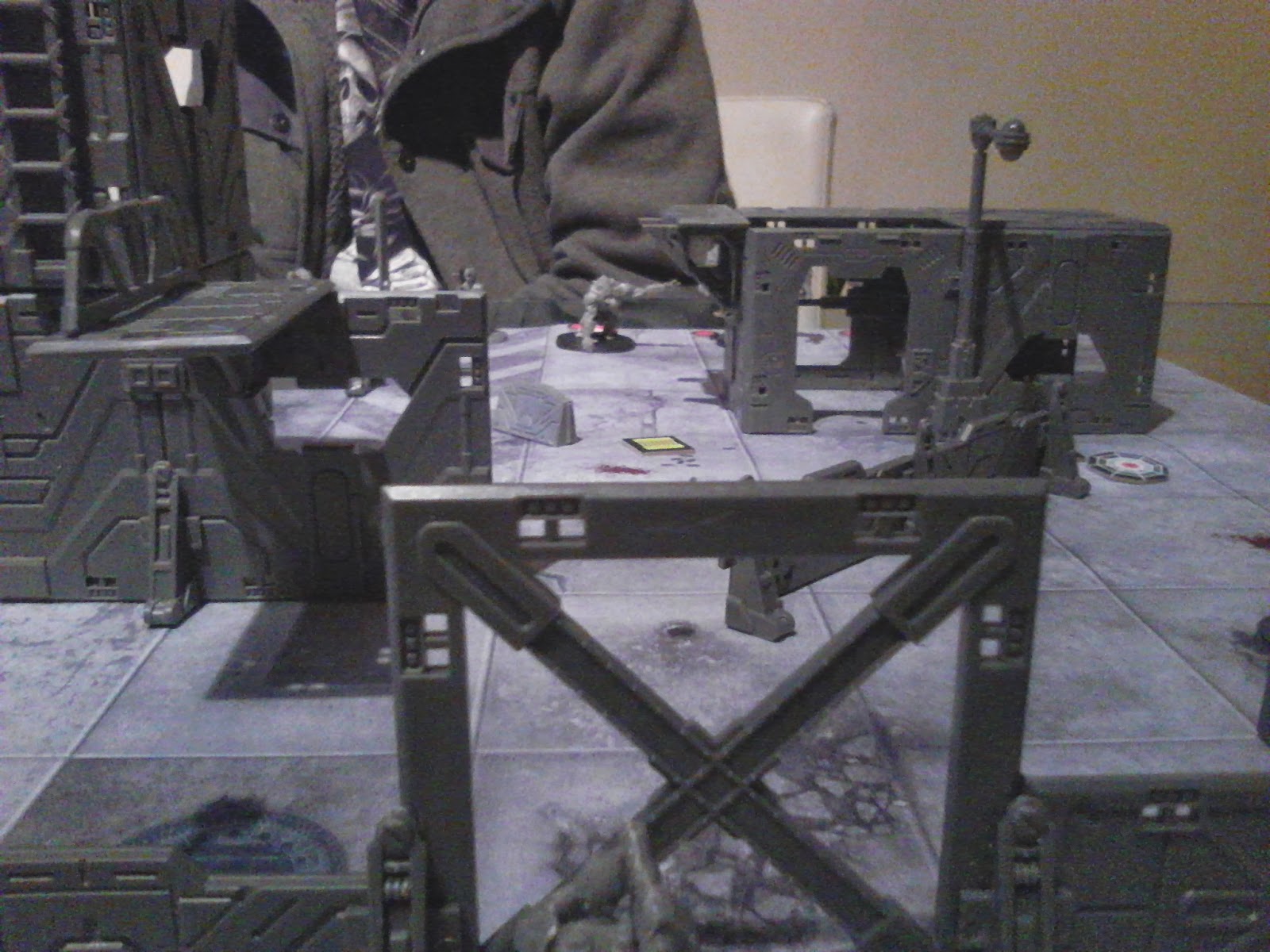 The plague army has some very fast units & if they get in they'll tie you up until the big hitters get in & at that stage your in a world of hurt, but that's not to say they can't shoot you as they have got some models with guns so I needed to be mindful of that as well. 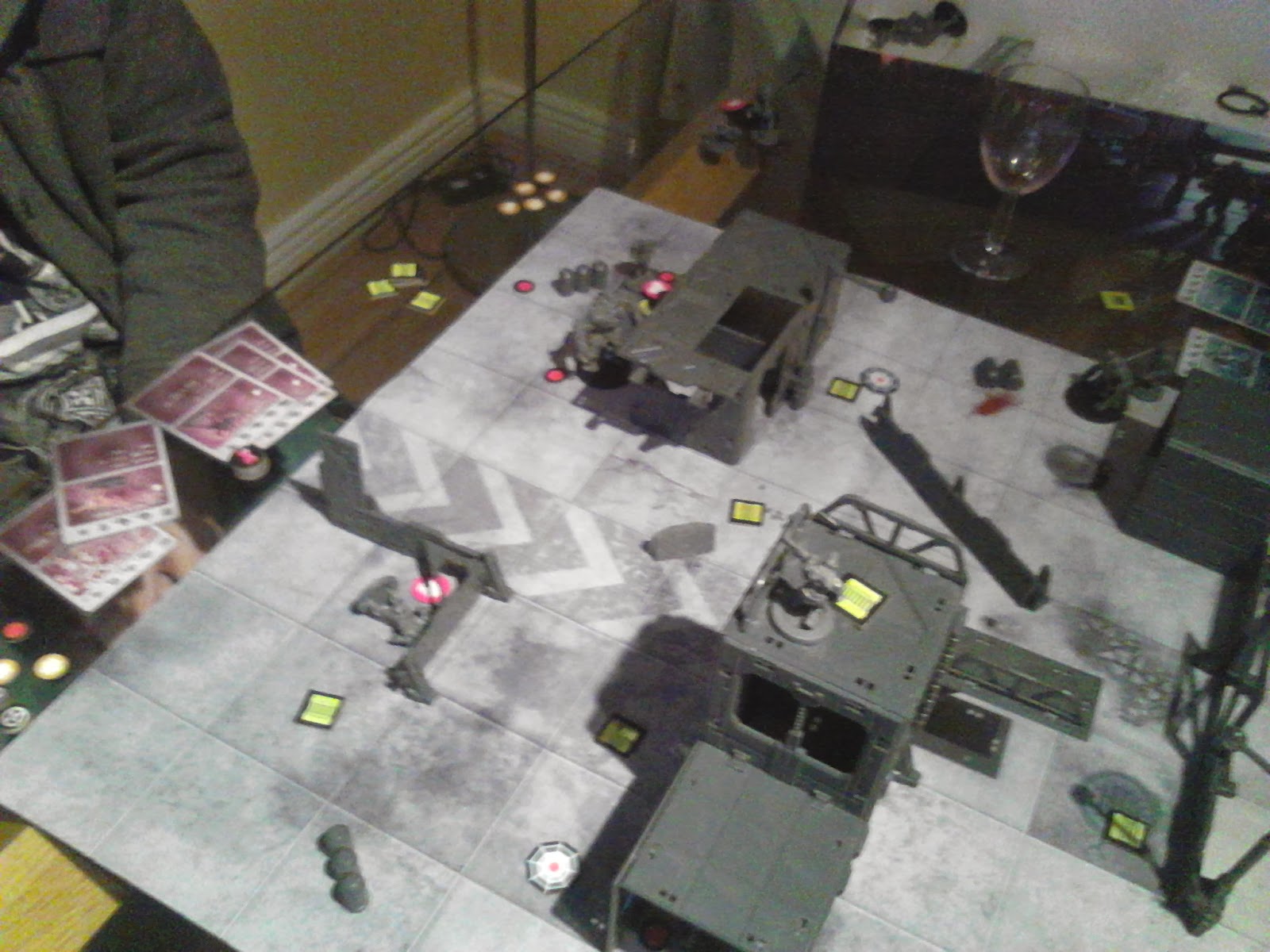 Now like I said this is only our second time playing so still plenty of looking at the rule book but at least we had the basics like moving, shooting & assaulting nailed down so that's a big help, anyway back to the game itself, like I said I had a plan now the think was to see if I could make it work. 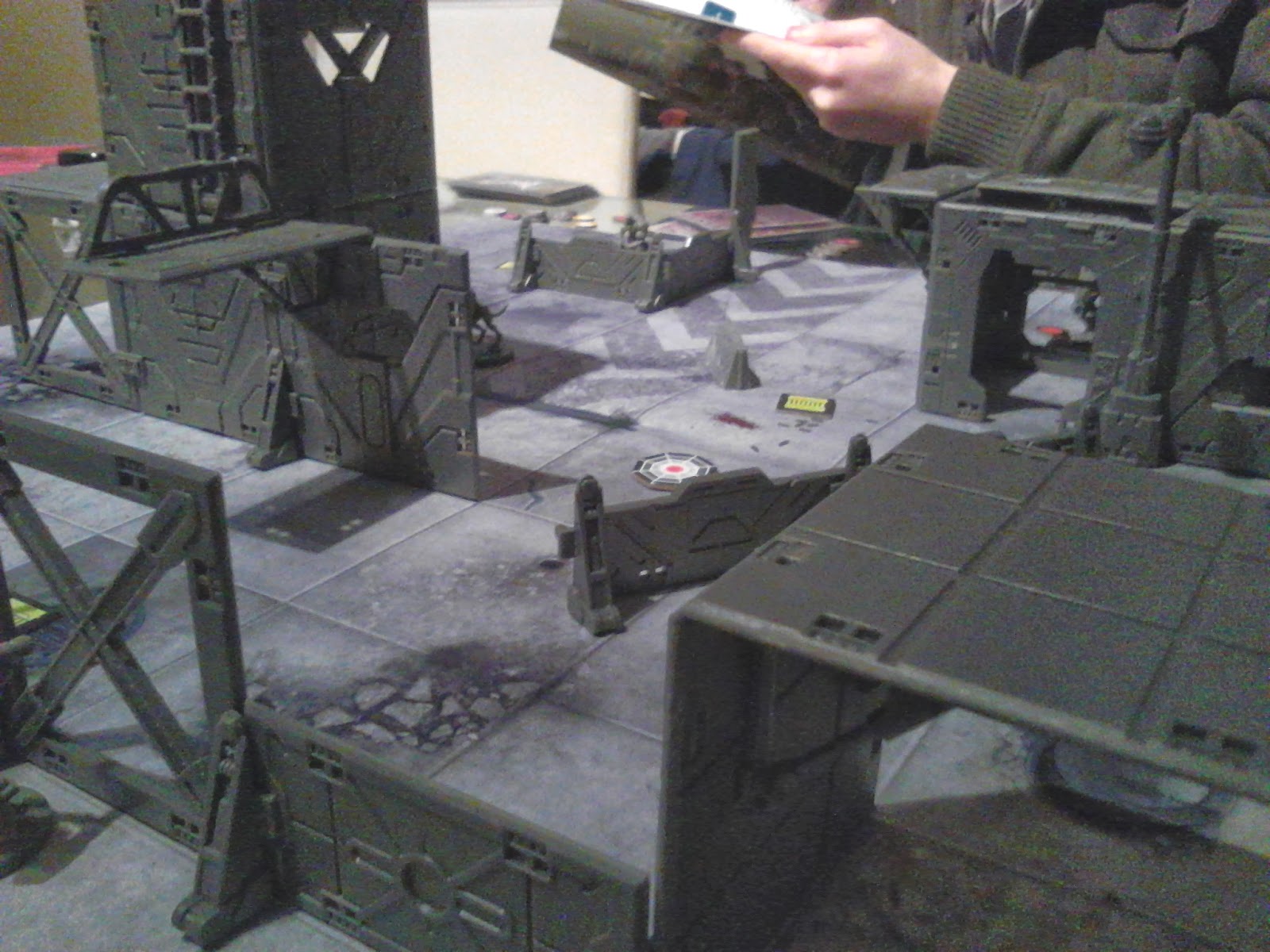 Now for a game that only on a 2x2 mat there's a lot or terrain which is good, but even so there still seems to be some good firing lanes to be found which makes for an interesting make as if you fail to get your models into the right areas your going to pay the price.

This is exactly how this game went more or less I found a couple of good firing points, with the highest point on the board offering me good all round firing from my HM guy while my MLguy & normal guy had a nice area of the board they could cover with the other two able to back each other up safe in the knowledge that their backs where covered. So with a good plan & a lit good fortune from the dice I was in fact able to complete my mission while at the same time stopping Patrick from achieving his, which is something about this game that is really good & that's the fact that your never sure who's win  as you never know what the other player is trying to do. 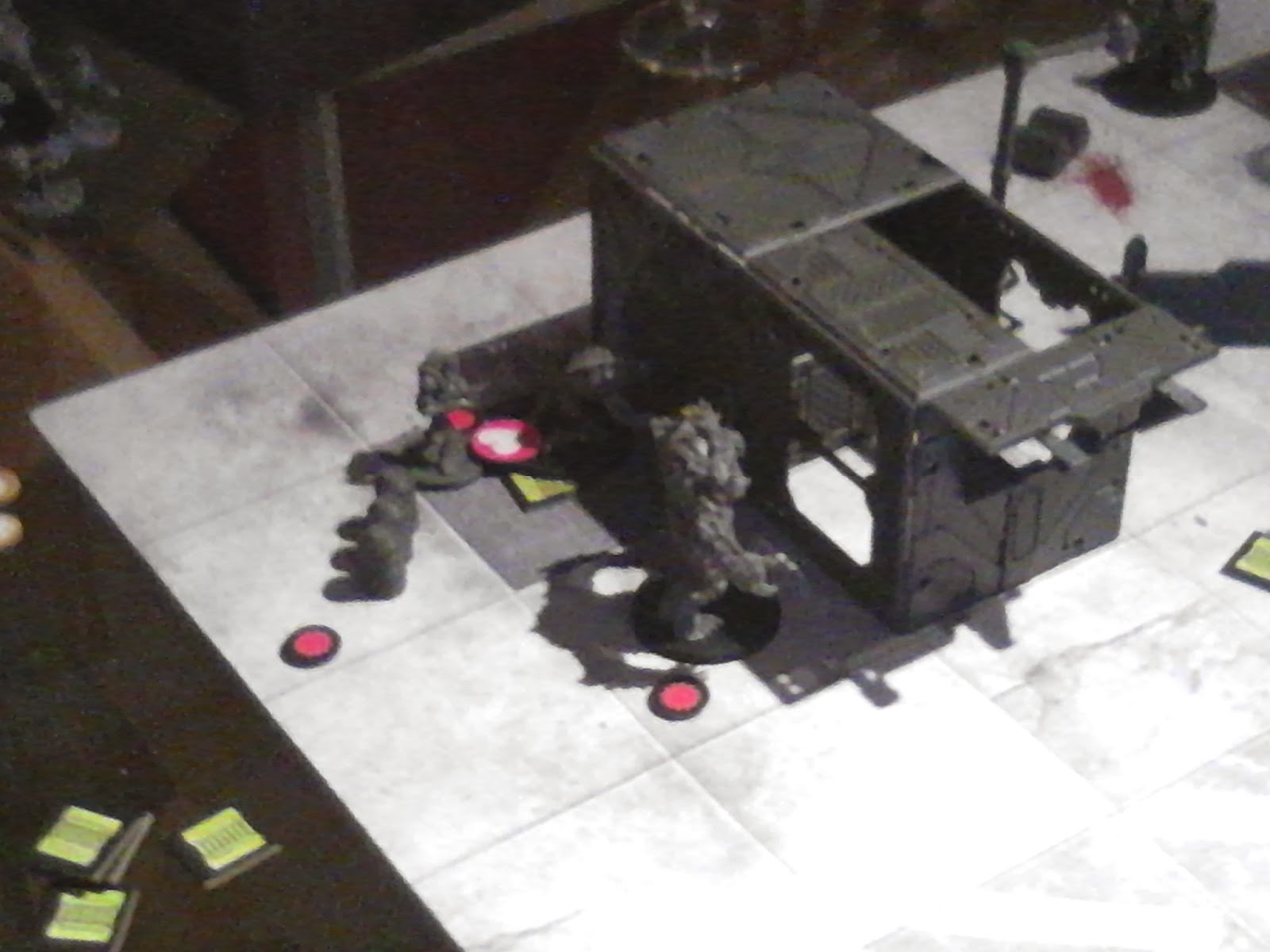 So my thanks to Patrick for a great game & to you for dropping in as I finish this post I'm heading out to play in a 4 player 3k each 40k game so be sure to keep an eye on the blog for a report.
Posted by Frank O Donnell at 2/01/2014