Lately I seem to be playing a lot of board games with me spending two nights last week playing games, its a hard live but someone has to do it right lol anyway the game I'm going to cover here is zombiecide. 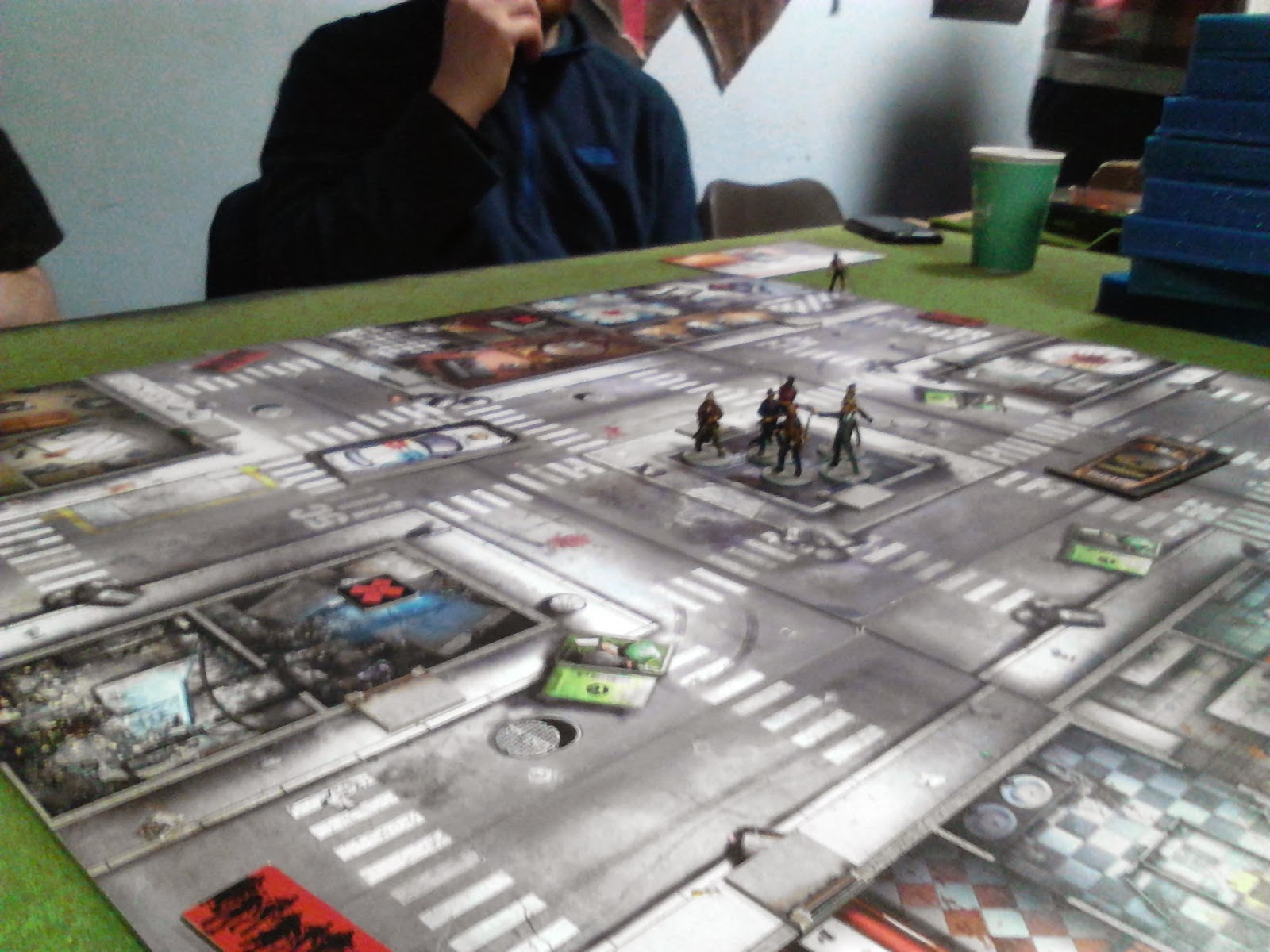 So what is zombiecide ? well its what you might think it is really in that there are zombi's & you have to kill them while trying to get some objectives, now one of the cool things about this game are the models & as this was Keith's game needlessly to say the models where painted to a very high standard. 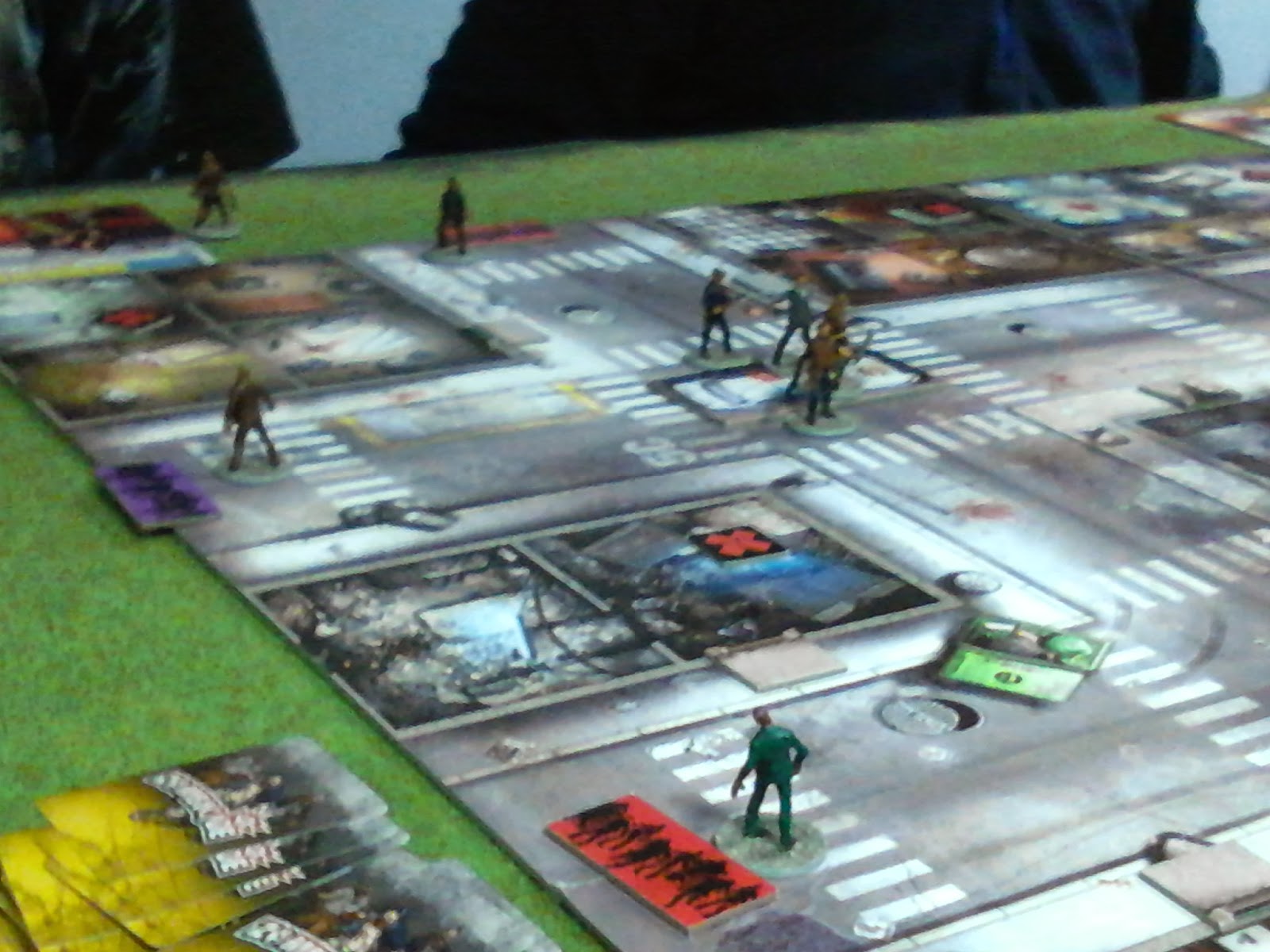 Now apart from the zombies there are all so so really cool character models who also have a zombie version as well, now when I seen these there was only one I could pick. 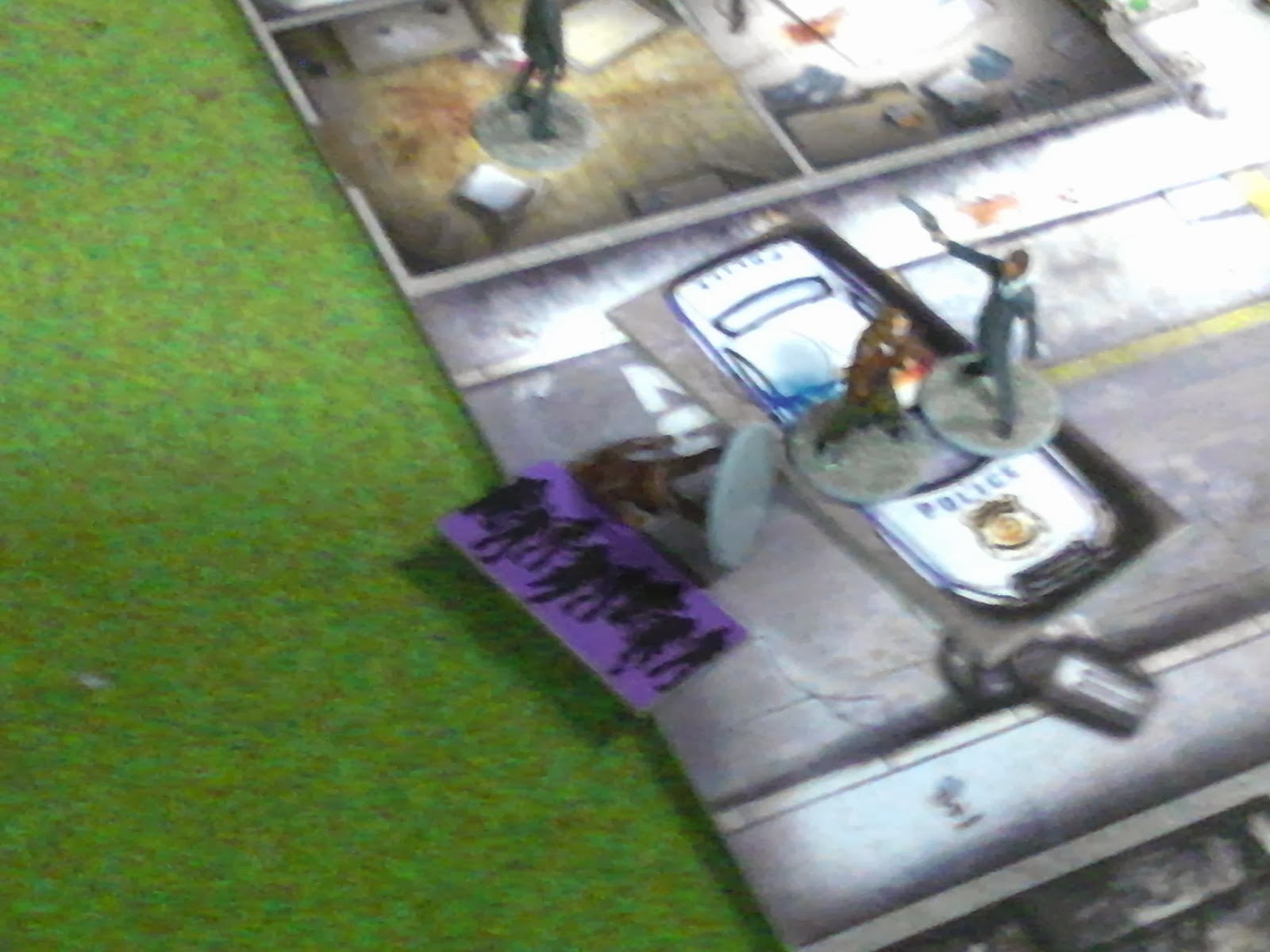 As someone who grew up on Clint Eastwood movies the Dirty Harry looking guy packing a magnum was cool straight from the icebox, having pick him there was only one other thing to do & that was to ask myself did I feel lucky enough to stay alive well did I ? 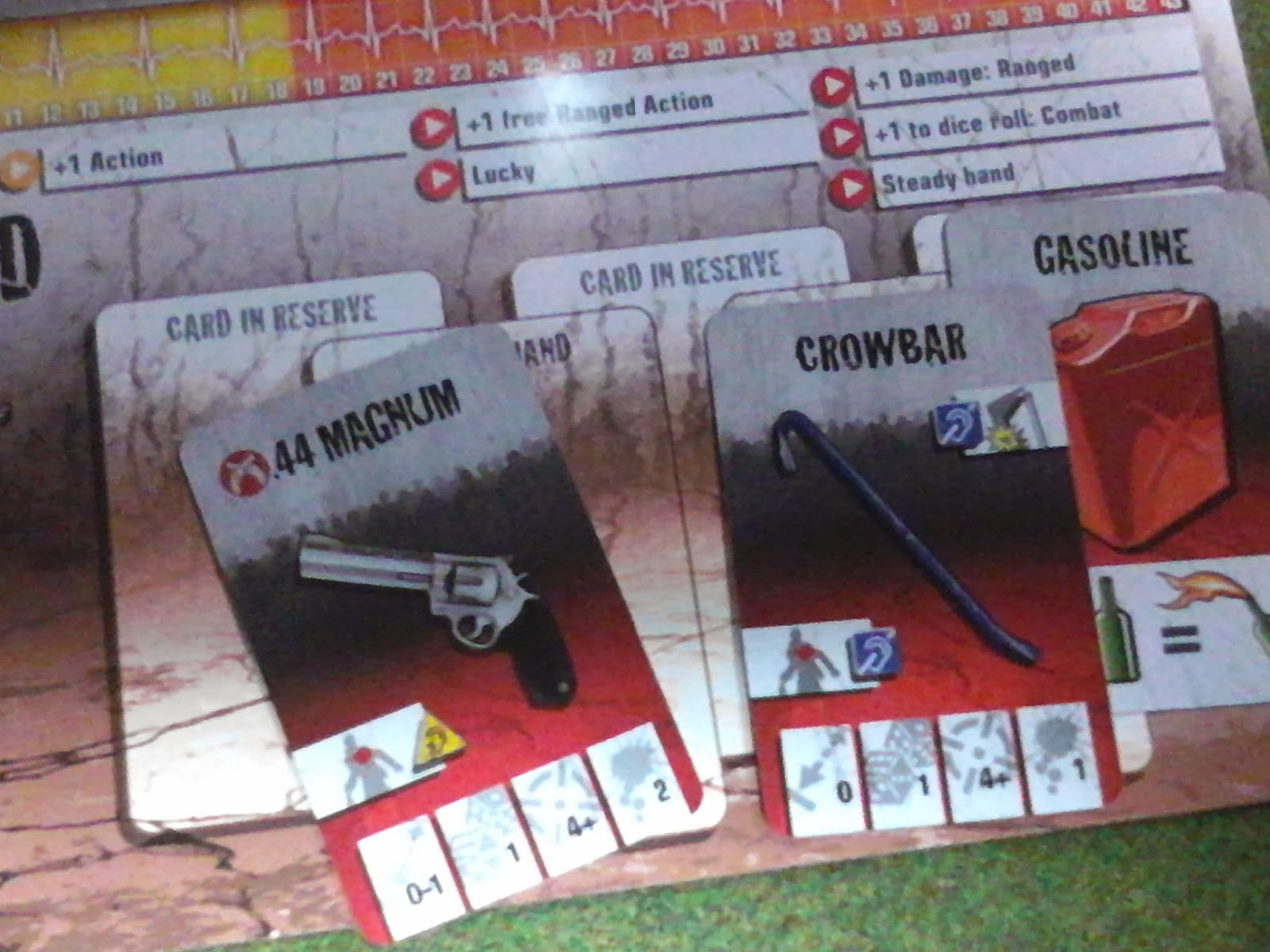 There was 6 of us playing & with the zombies playing themselves which make this a game that can be played solo but we all know the real fun comes from playing with other people as that is where the banter in a game like this will shine through. 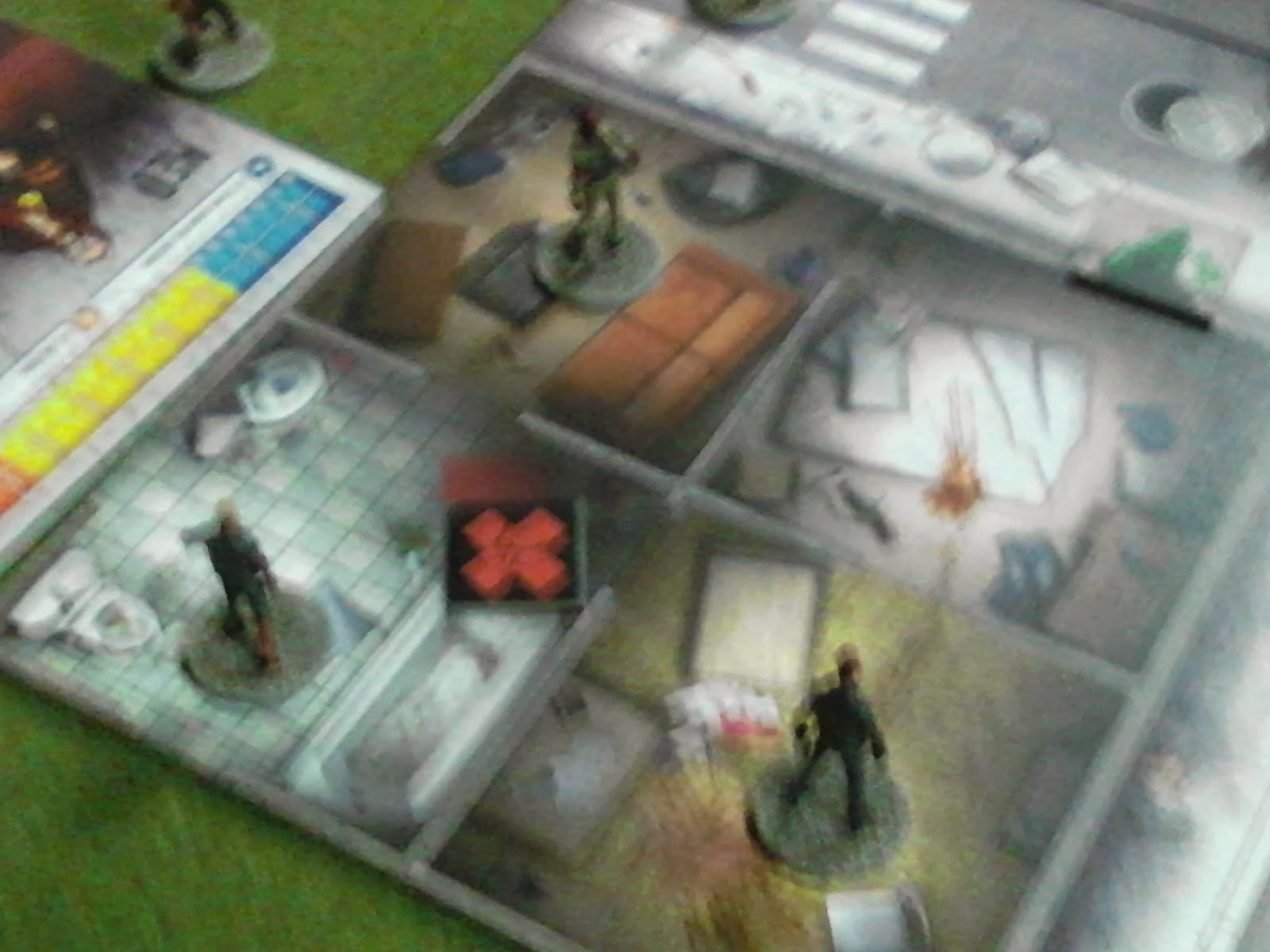 The games starts with all the players in a little room armed with all type of different weapons & from there they all move out in to the city to kill zombies & look for different things, but as you kill zombies you have a little tracker that as it rises changes the type of zombies & how many come on at the end of each turn. 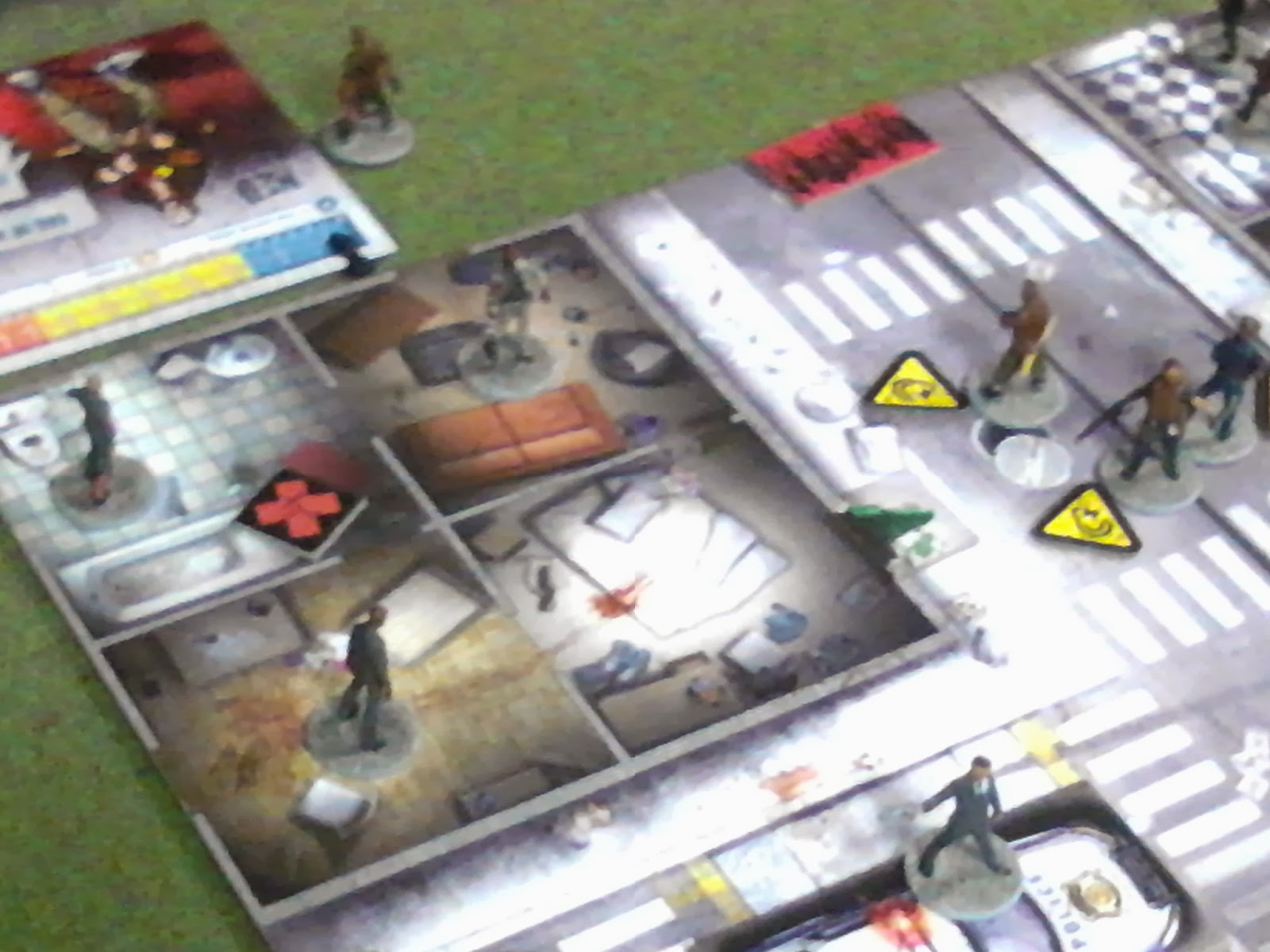 First port of call for me was the police car as you can search it for equipment but better still you can drive a round in it crashing into zombies & killing them on a 4+ the down side to this is you can also kill the other players & while I was tempted for the good of the game I play for the team, well most of the time I did. 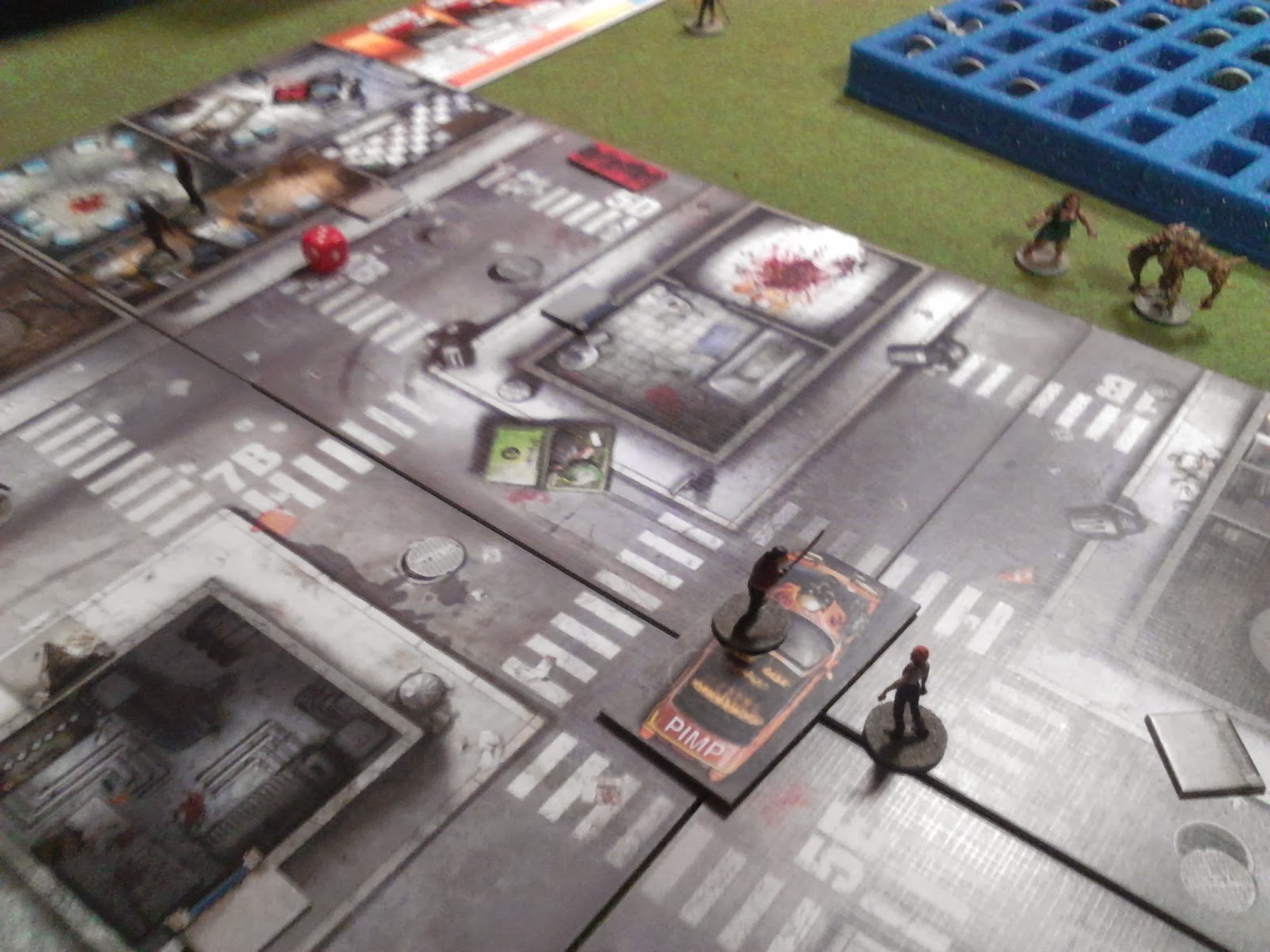 Well the first player to get his come upping was Ralph who running a round with a chainsaw killing zombies left right & centre got to cocky & got caught by a big horde turning him into a zombie much to the delight of his fellow gamers. 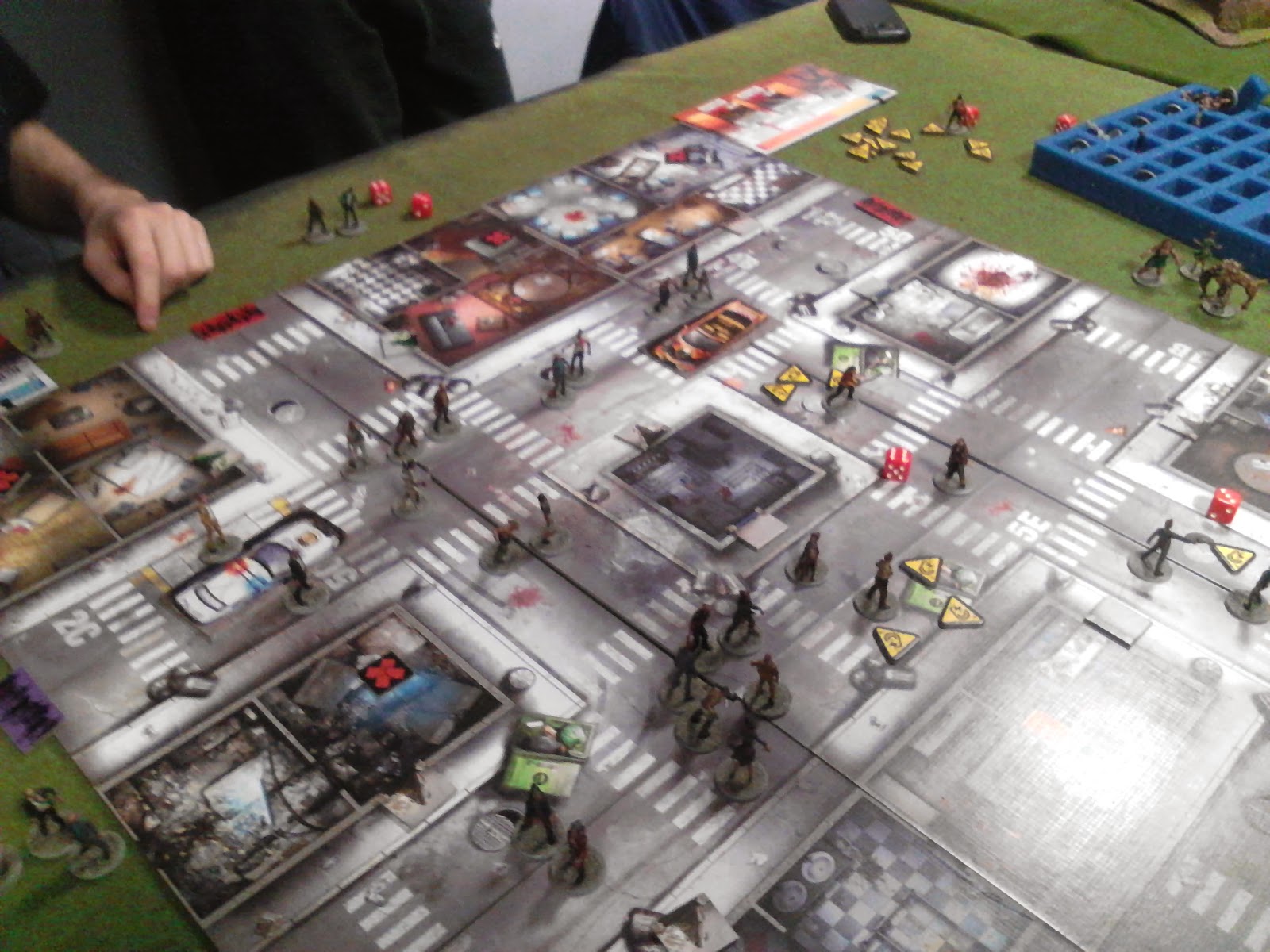 As for myself I foolishly against my better judgement went to the rescue for some of my fellow gamers & ended up getting wounded but lucky enough for me Keith came to my aid, as the way the turn is played out changes every time its easy to forget that just because you where going before someone this turn doesn't mean you will in the next turn & as I'd gone first when I went to their aid it meant I be going last the turn after. 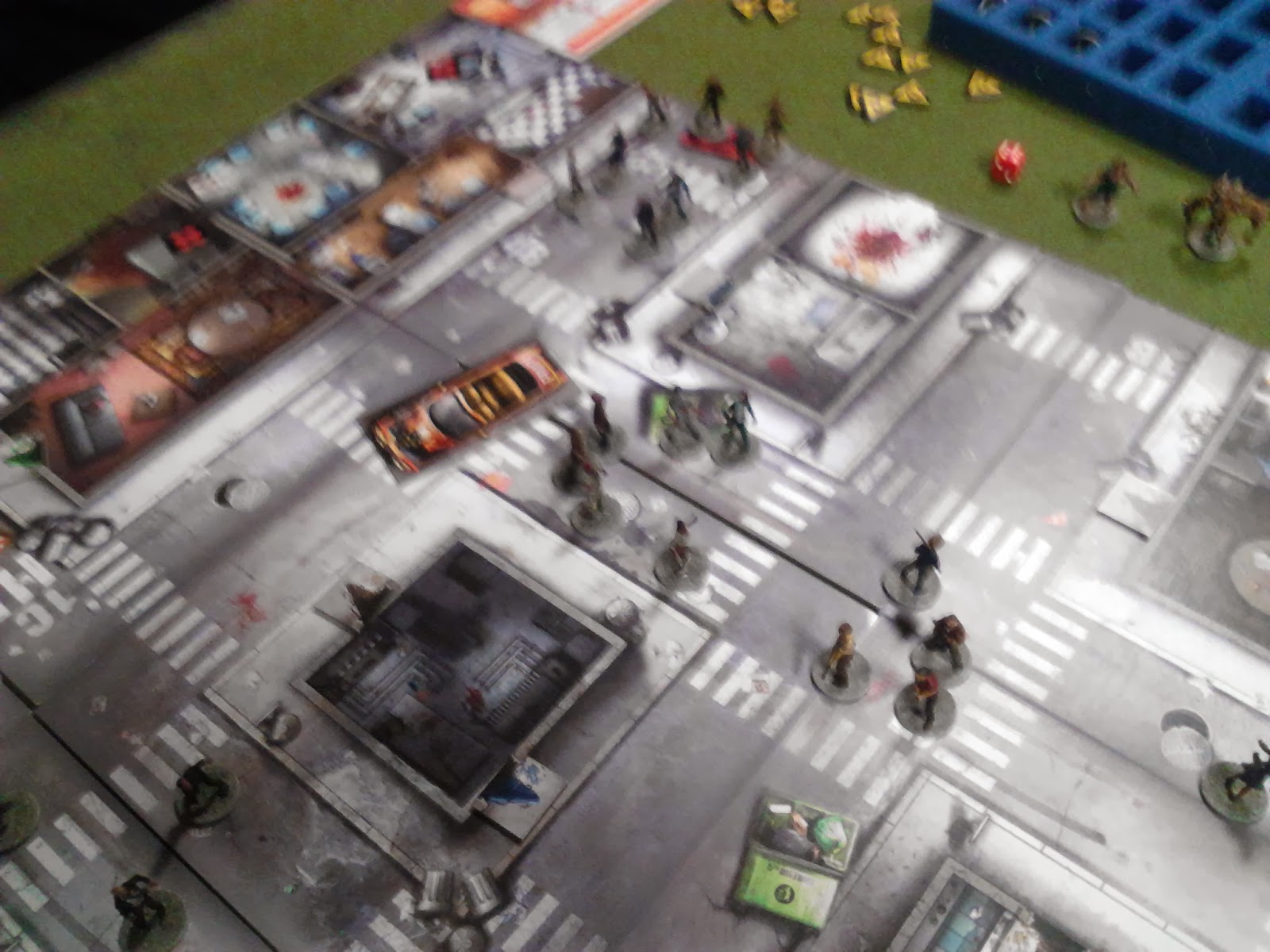 So after a couple of fun filled hours we had all of our objectives & now it was time to get the hell out of dodge the only problem was that Jamie ( who was playing a character he call fat Seagal ) had gotten cut off by the zombies, so in true team spirit we just drove off & left him to his own devices. 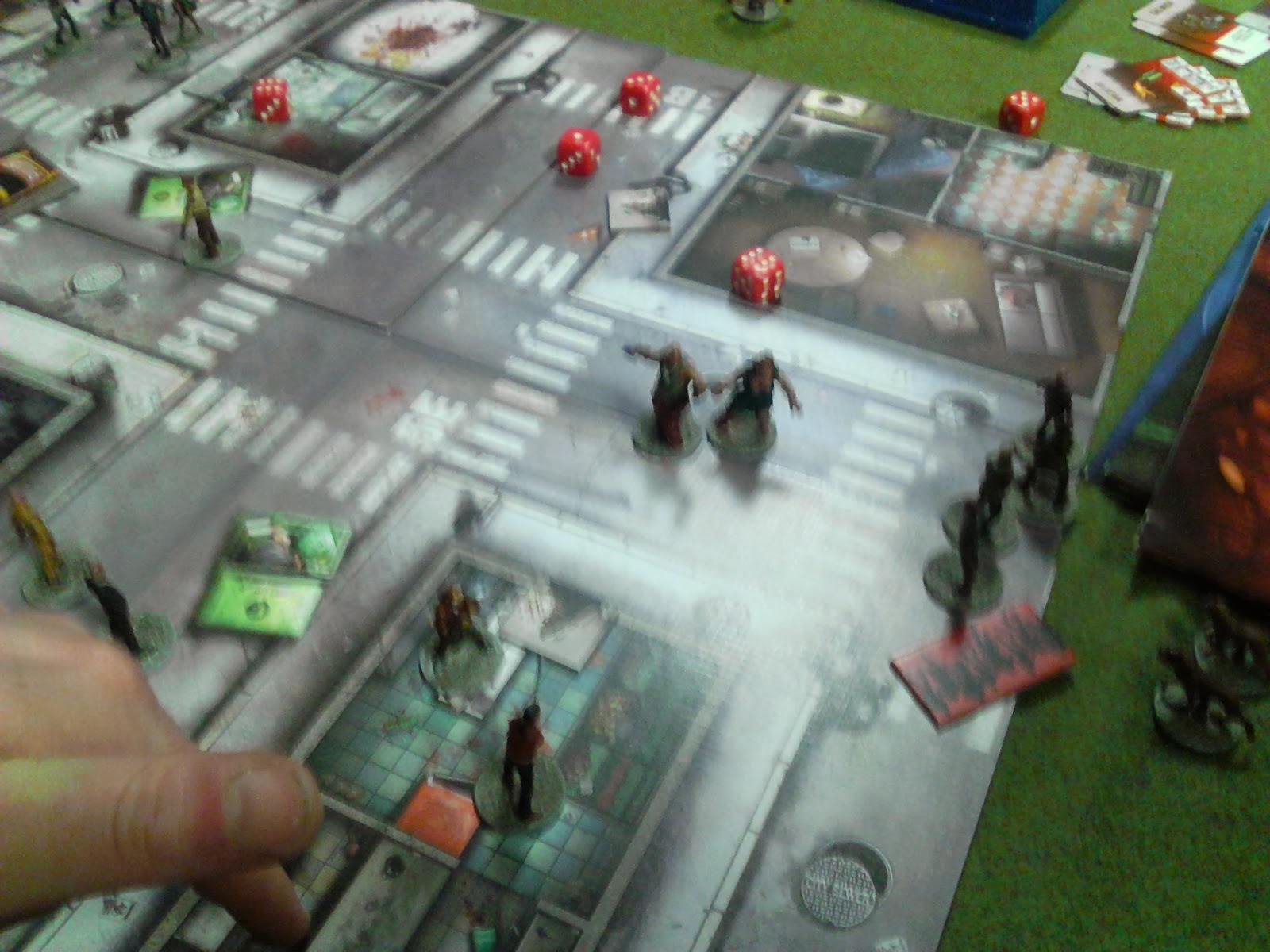 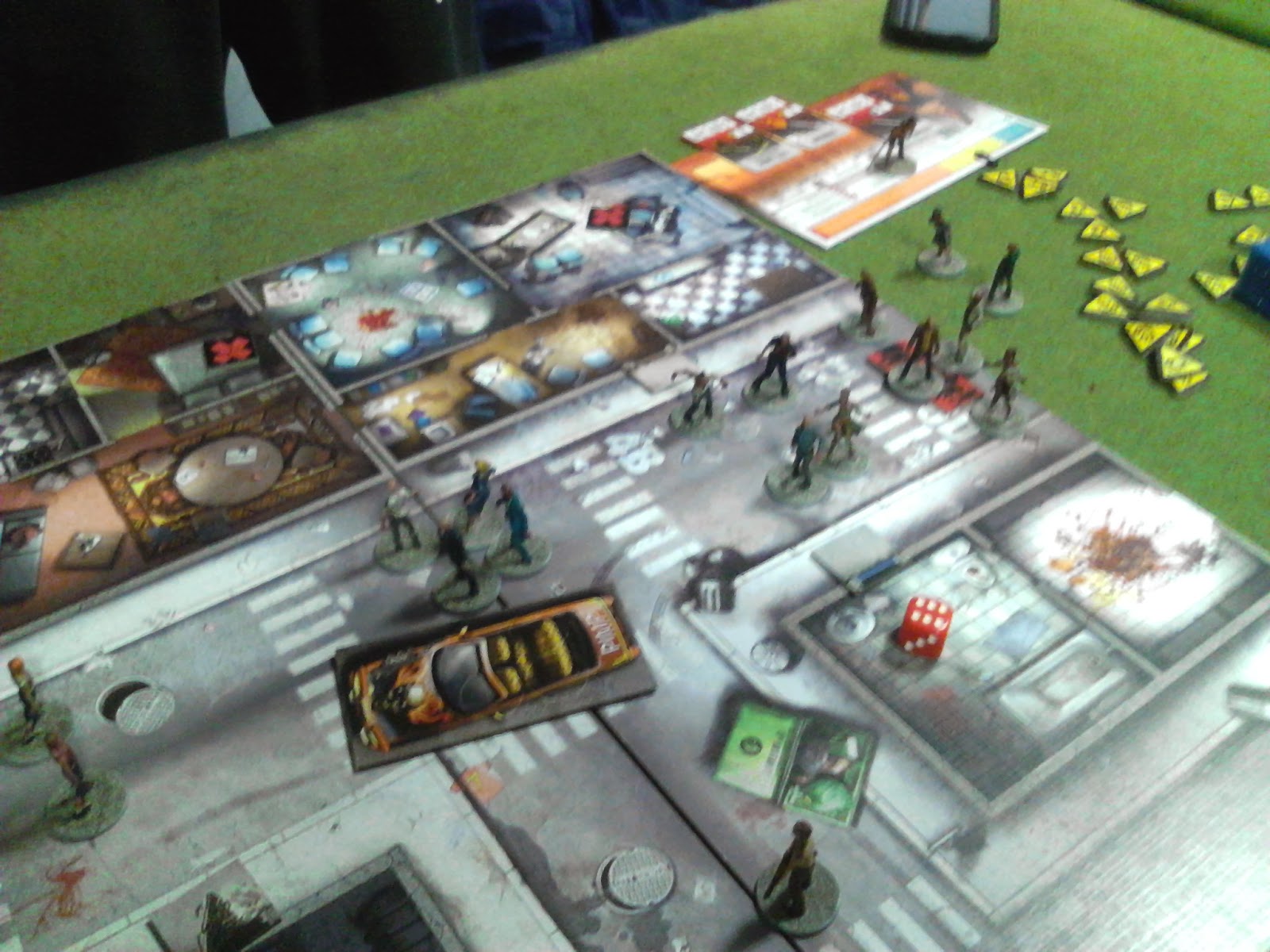 So I'll finish up by saying that in my opinion zombiecide is a very enjoyable with top class miniatures & well worth picking up & now all that left is to thank my fellow gamers Brian, Jamie, Paddy, Ralph & Keith, & thanks to you for dropping in I hope you enjoyed our zombie nightmare. 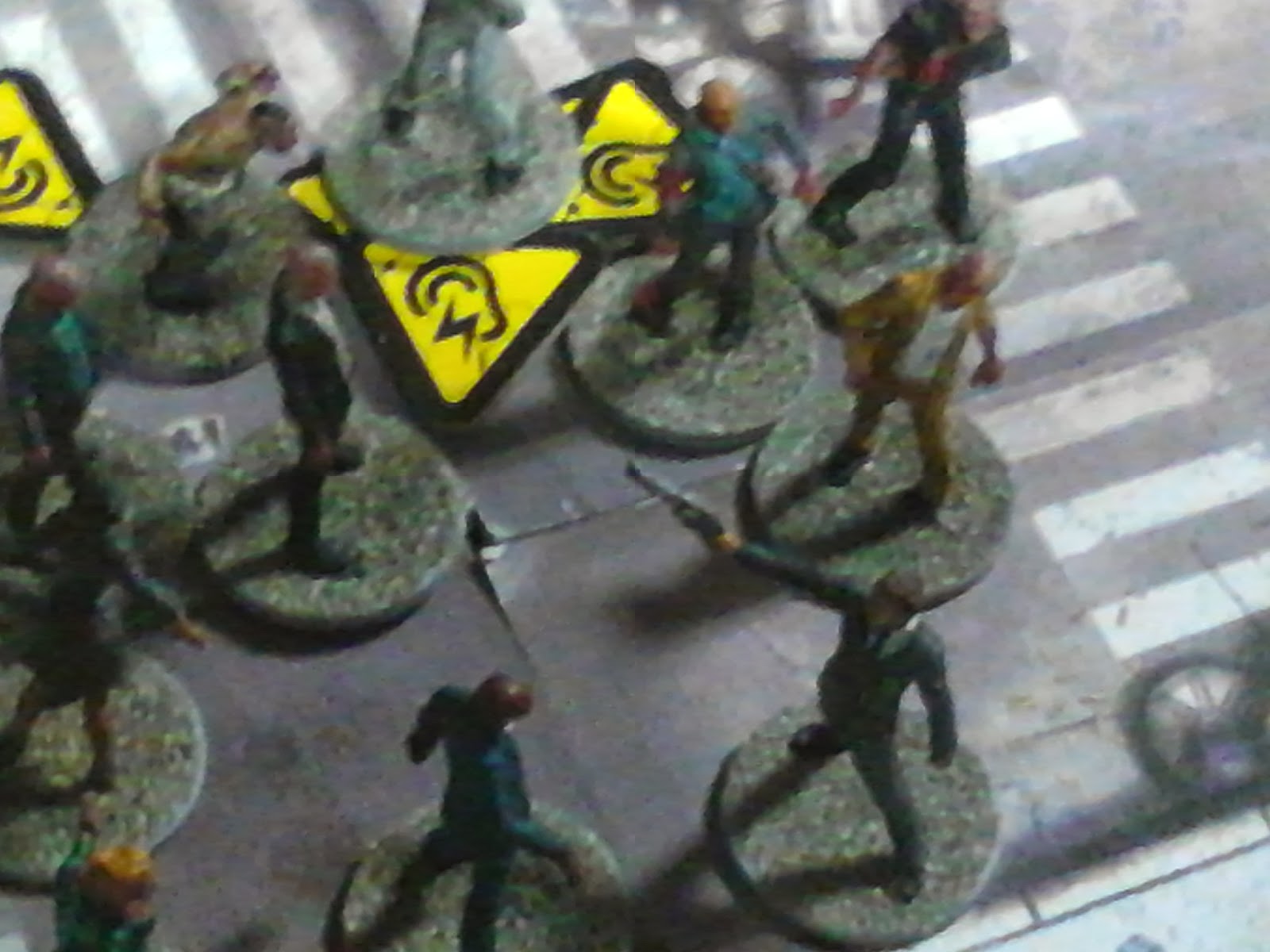 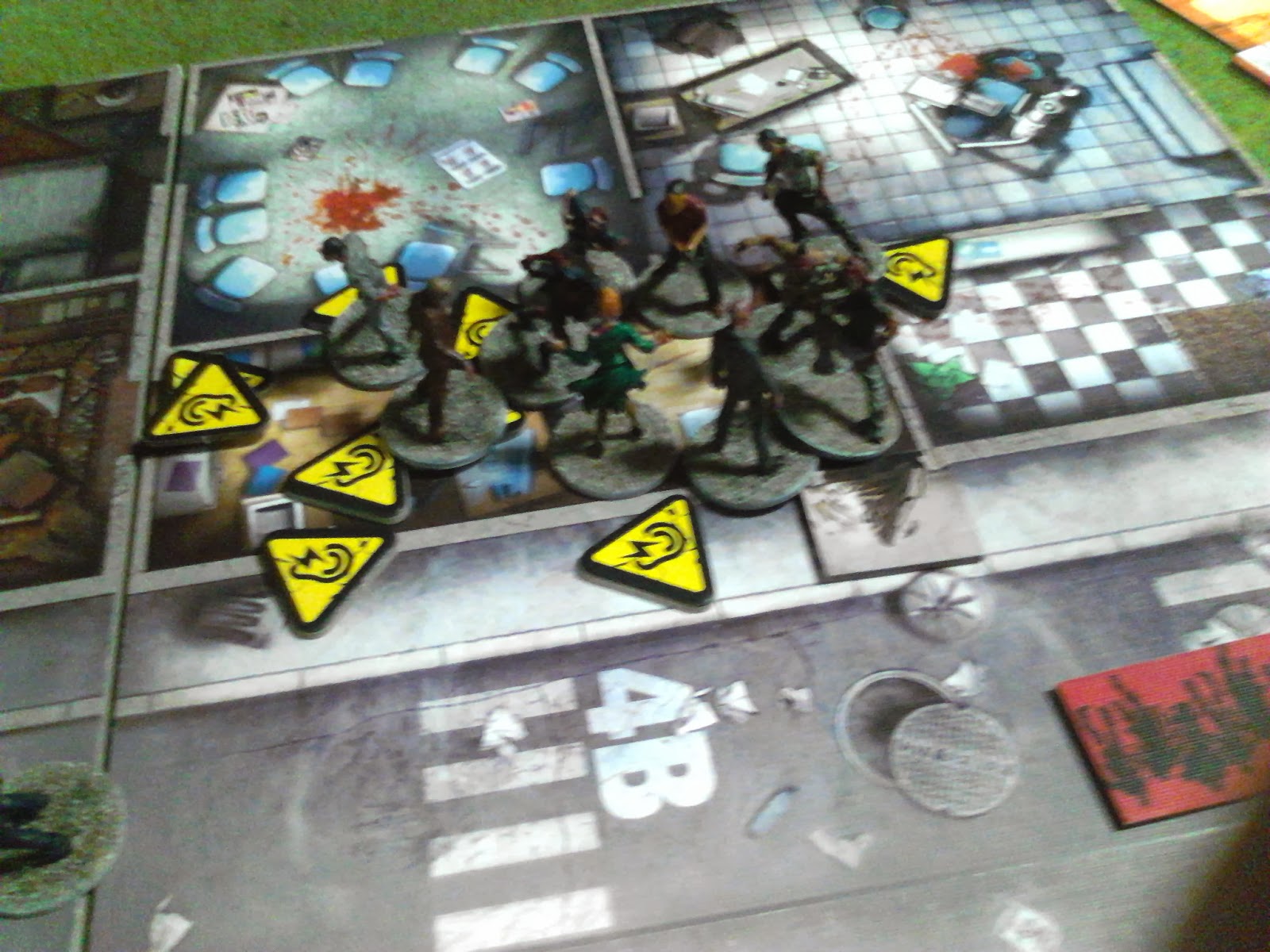