" & your sure that Briggs is held up in the armoury Bob" Inquisitor Capetillo asked the Kroot.
"Just as sure as I'm standing here next to you Inquisitor, he has two local hired scum with him to protect him but they would be no match for your boys" replied Bob.
" If your telling me the truth you'll be rewarded well, but be warned if this is any thing under handed there will
be no place you could hide that would keep you safe from my vengeance " Capetillo threaten.
" do you think I'd be that foolish as to cross the Inquisition ?" asked the Kroot in reply to Capetillo threats. 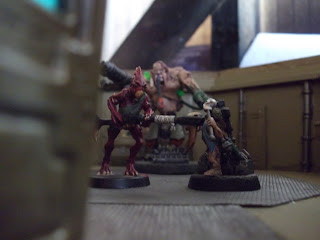 " I'll send Bror & Rouxinal in with you & Bror will be in charge so make sure you do exactly what he tells you" ordered Capetillo, Bror had been a big game hunter before he'd came to work for Capetillo & was the best shot the inquisitor had ever come across, Rouxinal was a servitor & would unbeknown to the Kroot enable Capetillo through a mind link be aware of everything that was happen. 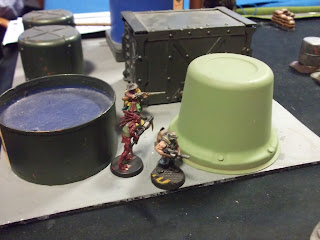 Slowly using as much cover as they could they made their way towards the main building until they where close enough to sprint the last few yards to one of the doors (which they found to be unlocked) & quickly moved inside.
The lights inside where on which at this hour of the day Bror took to mean that there was also someone else in the building, but who that might be there was no way to know.
Brigg's had a lot of enemies & if he was hold up here then there was no telling who else might be here after him as well. 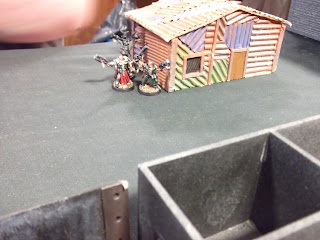 The room they where standing in seem like it was used for maintenance stuff & had tools & ladders stored in it as well as a small generator which was running in a corner to the left of the door they used to come in.
At the far end of the room was another door & in the wall over to the left just beyond the generator was a good size window. 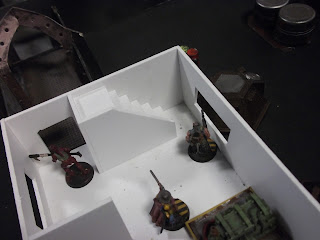 Bror order everyone to ready there weapons, while using the mine link I had Rouxinal head over to the window as to see if there was any sign of anyone moving about in the yard outside, with the cost been clear I got Rouxinal to shoot out the glass with his lasgun. 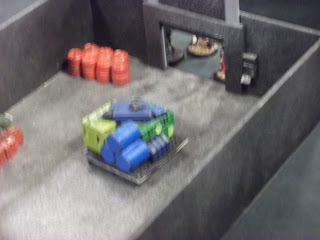 I'd noticed that across the yard there was another window in another room but as the view wasn't great from this angle I got Rouxinal to climb out & make his way over to the side of some big drums from where he might get a better look inside, while at the same time Bror & the Kroot headed out the door into a corridor. 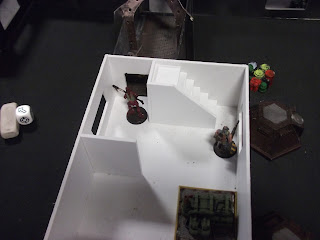 Out in the corridor there was nothing of note so Bror sent Bob on towards the door at the end while he took  up a shooting stance beside a stanchion to give covering fire if it where need.
All was quite in the yard as Rouxinal made his way over to the drums where he had a clear view into the room, back inside the Kroot step through the door into a small area with 3 other doors leading out of it. 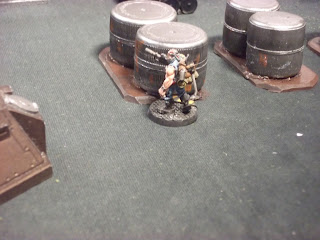 At this point we where unaware that some others who also wanted to get their hands on Briggs were silently making their way in from another side of the building. 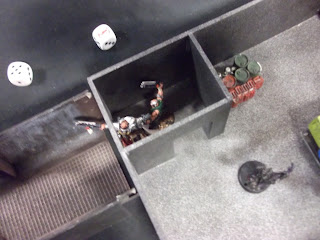 From his vantage point over at the barrels Rouxinal could see some people moving about the room this was more then likely where Briggs was hold up, but with no way of letting the others know I had Rouxinel make his way over to a  an outside corner 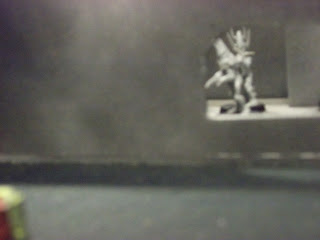 Opening the door directly in front of him Bob found this to just lead into another corridor with no sign of anyone up a head, this left the other two & coming from the door on the right he could hear some kind of machine running this could be the room they where looking for. 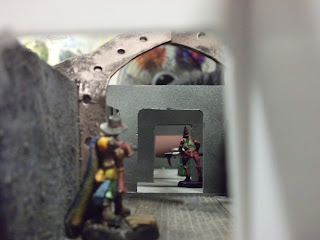 But before he'd a change to try to open it a shot rang out from behind him, Bror haven seen someone step in to the corridor at the very far end had opened fire
Outside pressed up against the wall Rouxinal.heard the shot from Bror's rifle which meant that however was in the room had probably heard it to & would most likely be distracted for a moment, so I had Rouxinal draw out his axe to smash the window & jump inside. At the far end of the corridor two man burst into view one with a shotgun & the other armed with a flamer, the one with the shotgun let off a couple of rounds in Bror direction knocking him off his feet, while the one with the flamer aimed it at Bob turning his left arm into a fireball.
This cost ed the Kroot to drop his rifle as he tried rolling over his arm on the ground to put the flames out. 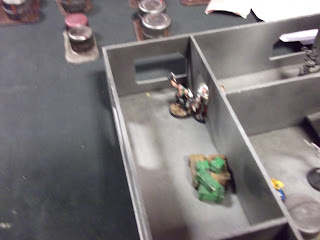 Taking advantage of the element of surprise Rouxinal made short of the two hired hands & closed in on Briggs, who was cowering behind some barrels.

Coming back to his feet Bror noticed that the Kroot was already back on his but had just backed into a corner, thing that he had lead them into a trap Bror put a manstopper round into him & watched as the Kroot smashed back into the wall before slowly sliding down to the floor.

No sooner had he done this when he felt as if the very blood in his veins was boiling, this is the last thing that Bror remembers of that night, as Rouxinal started to make his way back over to the window with Briggs in tow the door into the room smashed open & two figures rushed in.

I did of course recognise them, it was Inquisitor Hendelmann & his trusty side kick the mad Captain " this low life is hardly worth starting an inquisitional war over" I had Rouxinal say before getting him to end Briggs life by snapping his neck.

With Briggs dead the two men backed out of the room & after a few minutes I had Rouxinal go out into the corridor to try to find Bror, stepping over the Kroot he made his way over to Bror giving him something from his madipack before picking him up & carrying him out into the night.

In the excitement at the end of the game I forgot to take pictures so sorry about that, anyway my thanks to Jamie for setting up the game & my thanks to Lenny aka Inquisitor Hendelmann.

Thanks for dropping in & please call back again.