The Infiltration of Power Station XT5‏ 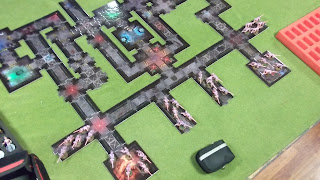 Pedro Kantor stepped up to the dias in the Strategium on board the Battle Barge "Eternal Vigilance". He looked around at his assembled Captains and Sergeants before turning back to the Hololith. "Brothers, I can no longer justify the continued prosecution of this war. We have sacrificed much but Diablos IV is soon to be lost to us. However, I will not allow the Tyranids to consolidate their gains here. Captain Cortez will lead a small strike force to infiltrate Power Station XT5. Their goal will be to set charges inside the nuclear reactor to destroy the station and contaminate the bio-mass the Tyranids intend to consume.As the Crimson Fists filed out of the strategium, Kantor placed his hand on Cortez' shoulder. "A moment, Brother". Cortez held back until the other Captains and Sergeants had left and turned to his old friend. "Pedro...". Kantor cut him off. "Alessio, my friend, this mission is important, yes, but the survival of the chapter is important as well. May the Emperor watch over you"This scenario takes place in the late stages of the invasion of the planet Diablos IV by Hive Fleet Nagaina. The historic battle was between the Crimson Fists Space Marines and the Tyranids, but could be modified to suit any two armies. This scenario is not suitable for tournament play for obvious reasons.To represent the tangled ruins of the power station, the warren of corridors will be represented by a Space Hulk board (the squares are ignored). The standard Warhammer 40,000 rules will be used with the following modifications. 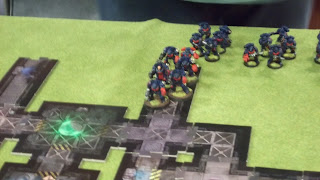 The report of squad sergeant Olian.

As we entered the dark dank of the power station the darkness seemed to swallow up everything, but from what we could make out a head of us from the lights built in to your suits making our way forward was going to be slow going. 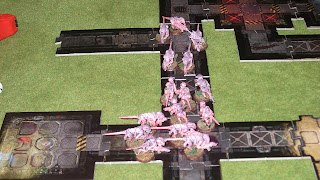 The auspex was picking up lifeforms from further into the complex, but what kind of lifeforms we had know way of knowing we would have to be alert at all times. 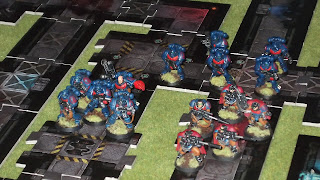 Stealth would be our best approach trying to a void contact with the enemy until  it became unavoidable, ahead of us we could hear the sound of something moving around, but each pasting moment brought us closer to your object. 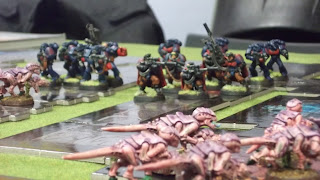 Then all of a sudden the silence was broken by the barking of bolter's as one of the squads came into contact with the enemy, then the whole complex seemed to be full of the sound of things moving in the dark. 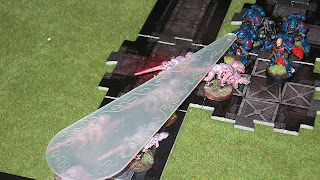 Squad Valus had come under attack from a brood of termagants  who they quickly disposed of but one of our brother's had falling, then the rest of the forward squads started to report contact with the enemy. 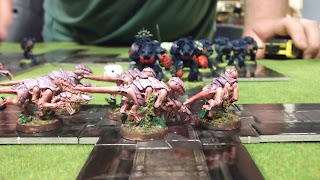 Over in the west side of station Captain Cortez & the terminator squad  where reporting a heavy nids present. 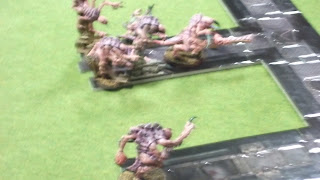 But battle on undeterred their terminator armour keep them safe from the bioweapons of their foe, the scout squad along with squad Kerl pushed on supporting one another. 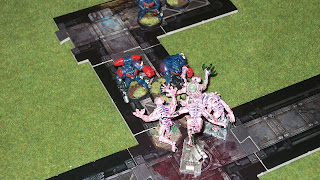 After killing off the termagants & with their target room in sight Cortez & his squad where assaulted by a brood of genestealers who's harden claws started to cut through the terminator armour like a chainsaw through an ork's hide. 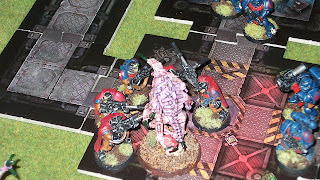 The tyranids seemed to becoming out of the walls with a broodlord smashing into the scout squad, who fought bravely but where no match for such a monster in combat. 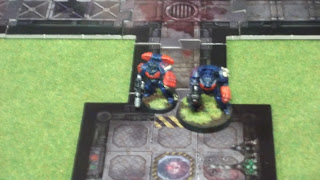 Haven finally seen off the stealers a badly wounded Cortez & a lone terminator made it into their targeted room & set the charges, but sadly it was to become their coffin as their way out was cut off by a hormagaunt   brood. 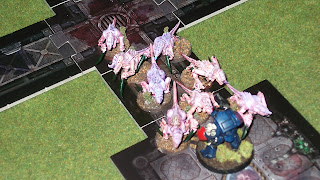 On the eastern side squad Valus had also managed to get to their object room & set the charges but where then set upon by a swarm or rippers that had come up behind them unnoticed. 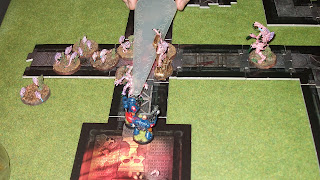 With the charges set the order was given to start the retreat out of the complex to the waiting thunderhawk, sadly only three of us where to make it one of my squad falling under a ton of fire from a brood of devilgants that tried to cut off our path & another one falling  to a broodlord who I then laid to rest with a smack of my powerfist. 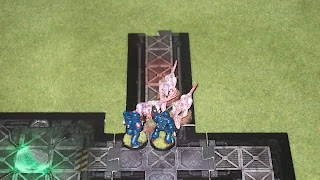 As the thunderhawk headed for orbit we were rocked be the blast from the plant far below us this had been a mission that would leave deep scares on the three of us for the rest of our days.

Many thanks to Lenny for setting up what was a very enjoyable game the rules for which he will be posting over on the DGG blog.
http://dublingamesguild.blogspot.ie/
Posted by Frank O Donnell at 11/29/2012