With most of the Imperial forces now safely off Corona Secundus Inquisitor Coteaz gave the order for the rearguard to start disengaging the enemy & get to last few Thunderhawks, Abaddon he new would be doing the same after the Tyranids had started to over run the city. 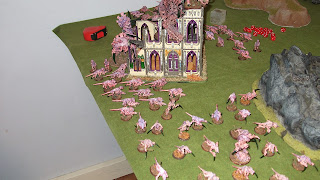 The tyranids had entered the city sliently from the east while the Imperial & chaos forces had been busy fighting each other, as a result the first that the Imperial forces new of their arrival was when one of their razorbacks was wrecked by bio weapon 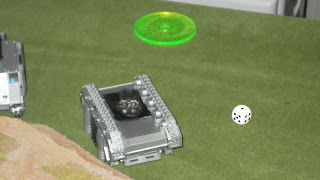 Coteaz new that not far behind the small & nimble nids would come the gigantic monster that at this stage of the infection would be sure to exist, things like trygons  & tyrannofexs against which there was little defence.
Next could be heard the flapping of leathery wings as the sky turn dark with the shear amount of gargoyle's  & flying ripper swarms. 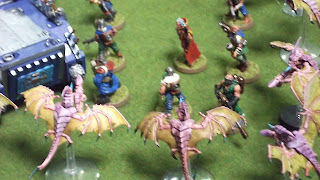 The tyranids attacked imperial soldiers & chaos warriors a like as the hive mind takes none as allies,  still they came with a flying hive tyrant droping out of the sky in front of a dreadknight  7 charging straight for him. 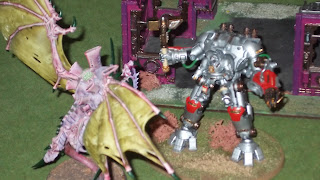 Trying to maintain discipline under such condition's was proving hard with many of the chaos forces braking & running in the face for the tyranid assault while others stood & fought bravely only to be thorn apart limb by limb. 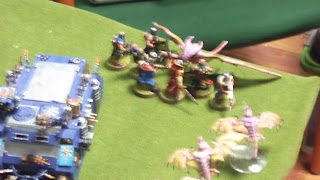 The chaos forces tried in vain to strike back with Abaddon himself butchering untold numbers of gargoyles but to no avail with the tyranids seeming to be without number, with helldrakes & daemon princes in the air trying to stop the Imperial withdraw & the tyranid advance at the same time, they where only fighting a losing battle. 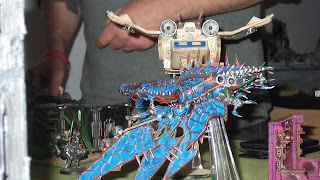 While a squad of paladins where helping too hold back the sea of tyranids that was by now just washing over everything, while all over the city man, women & beast found it hard to stay on their feet as the ground shock as mowloc's & trygons borrowed up from below. 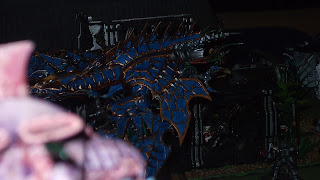 Coteaz Together with what was left of the paladins were the last of the Imperial forces to take off from  Corona Secunduso A planet that had very near costed the Inquisitor his life at the hands of what now had become know as Hive Fleet  Nagaina. 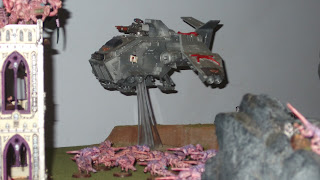 As I finish up my report on Corona Secunduso I can at less take some comfort in the fact the planet has been totally consumed by the tyranids who by doing so insured that any taints of chaos that would have come from the warp on the planets return have now been totally removed.

In the cold dark void above the bare rock that Corona Secunduso had become the hive mind sent out the pluses to the Hive Fleet to move to the next planet in it path, he knew not or cared not for all that had died or been lost on the planet below, for to the hive mind nothing ever died or was lost but only ever consumed to be reused over & over again, such was the way of the great devourer.