An interesting week that seen me cop last Sunday after the list submission date that my list was illegal & leaving me with a lot more work to do then I would have want end with a very enjoyable return to the tournament scene. 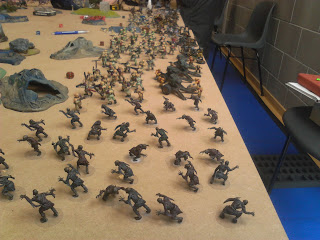 Every since I'd started using the Vrak's renegade's allied with the IA 13 renegade's  something at the back of my mind was troubling me there was in there a feeling that it just wasn't right, now I'll be the first to admit that I'd never embraced this new way of building an army, sure I'd ran IG with SoB's but I didn't need to look to deep into the rules to know I could do that, so I decided that I'd look into thing's just to be sure & low & behold I fined that even though their both from different books they both come under the same faction & unless your running GW's chosen ones that's a no no. 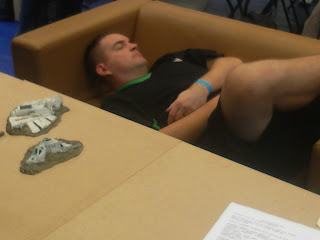 Long story short I submitted a new list did what needed doing model wise & Saturday morning headed down to Limerick where Jan of ork fame was awaiting me with his meganob'z, I'd never played Jan before so had challenged for the first game, I knew Jan was a top player & that I'd need to play smart to try make a game of this, deployment turned out to be 12 inch's in down the table length not really the one I wanted. 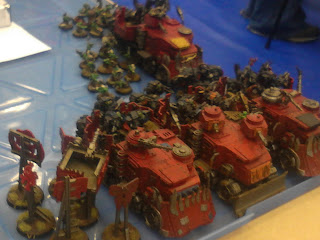 I split my force's to each end hoping I could get him to do the same but he was far to smart for that & done what I'd have done myself & hit me down one flank oop's, well as long as I start getting the things he kills back it not the end of the world, but when you tempted the dice god's by having a blog named if it wasn't for one's &7 return to a place where legend has it you rolled 20 odd one's in a row the last time you where there well your just asking for it, two plasma squads dead roll to see if they come back on a 2+ & yes my friends you guessed it, if it wasn't for ones lol. 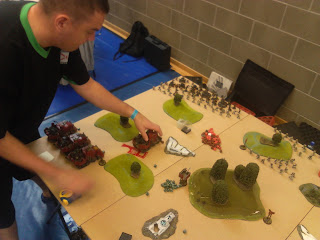 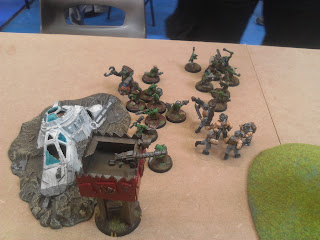 At his point Jan is looking at me as if I'm mad & laughing his head off, but it's third time lucky time to roast  some grots that'll put the grin on the other side of his face, anyway when the dust had settled it was what I believed was a 15vp's to 5vp's win to Jan which was in fact as my son inlaw told me when I got home the next day a 14vp's to 6vp's  win to Jan, which is good as it just goes to show you all how little interest I had in scores, I was hear for one reason only & that was to have fun & nothing else mattered. 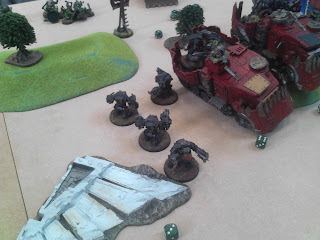 Next up Caolan using Eoin's ETC cron list & this game has kill points involved in the mix, I just know my guys will be dying to come back in this game to make yet even more kill points (pun) as I face what is know as the lifestar, well if ever a game didn't go like you might think it would it was this one. 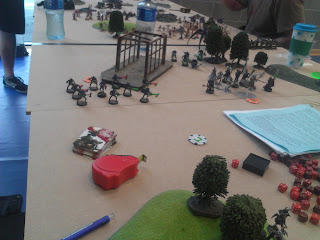 If Monty Python was to have ever done a game of 40K it might very well have gone like this one & while it might not have been one of the most nail biting games I'd ever played in it was with out a doubt one of the most fun, as I started to turn killing my plasmaguner's into a fine art, but then was to come what was to be the high light of the game as Caolan tell's me I shouldn't kill was is the last cron left in a squad as the whole squad will then come back. 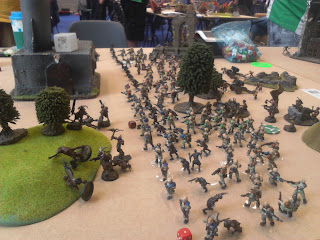 Did I mention that I was only hear to have fun & that nothing else mattered ? so I go about trying to kill this cron that I want to die that Caolan wants to die but nobody seemed to have told the cron as he every save I put on him in my shooting phase like a boss, right so I'll just have to do it the old fashioned way, hand to hand with the beastmen the cron goes into overwatch rolls to six's then rolls to get to wounds on me which kills to beastmen & end's up with me failing the charge lol. 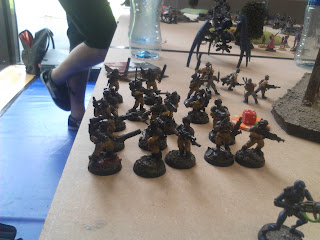 Anyway when the dust had settled on this one I'd won, don't ask me what score as I don't know & don't care, this game was so much fun that there was no loser just two winners, it getting late in the day now as there was a big delay at the start waiting for the terrain & the heat inside the hall is really uncomfortable but there's still one more game to play & it's everyone's love to hate army at the minute Elder, I just want it on record that I've always hated them lol. 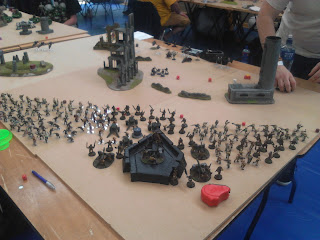 So it Alan from Cork & it's a council  on bikes spiders & some more bikes, sadly we didn't get to play much of this game as time was up but had it keep going the way it had started I might well have been tabled, against one of the top armies with the dice gods stilling beating down on you there can be no escape from, so lets just say I was saved by the bell, I still lost but maybe by not as much as I would have, once again I don't know the score. 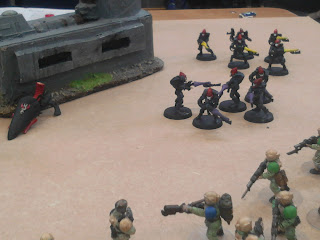 Sunday was to see me getting thrown to the dog's & I was facing off against what is called the dogstar or maybe it should be the wolfstar either way Bob had one hell of a lot of furry four leg's friends on the table, this is yet another ETC list. 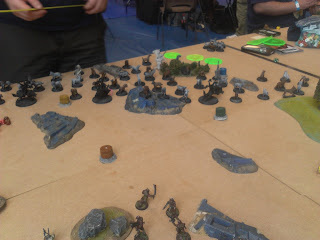 Now the dice god's are still playing games on the plasma front but at least they seem to have forgiven me on the getting my guys back front which was just as well as Bob & friends real wanted to put the bite on me & me a dog lover, you'll never know dear reader how hard it was for me killing all of those dogs & this ended with Bob one wound away from been tabled & to be honest I'm glad that didn't happen as this was one of what is for me one of the great 40K battles & was out & out slaughter. 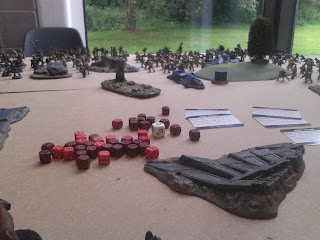 If you watch a game of throne's  just imagine  the battle scene in the second last show of the season just ended to picture what this game was like, if the blood god wasn't happy here then he will never be, this result I do know it was 11-9 for me two ETC lists played two ETC lists beaten & both in mission that had killpoints added maybe be I should be heading over there lmao. 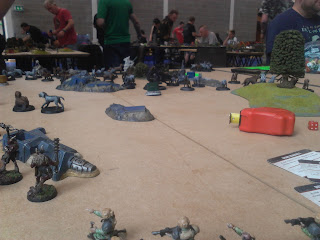 Last game was to pitch me against the only lady of the tournament Elaine & while it was more wolf's there wasn't as many of the four legged kind, it seemed that by this point the legend of my ability  to roll one's had gone to the four corners of the hall & Elaine was looking forward to witnessing this first hand, but the dice gods can also be benevolent & had decided that enough was enough I had paid the price for been so bold as to build an army around a 2+ roll. 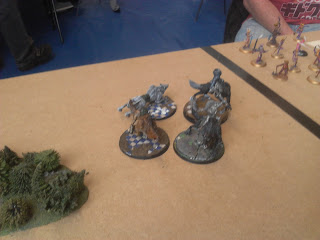 A start that see's you getting 5vp's for killing one model is maybe not something you will see me do to often but in my experience anything that can happen when rolling dice will & if you believe that & never force yourself to roll a dice you don't have to you'll be all the happier for it. 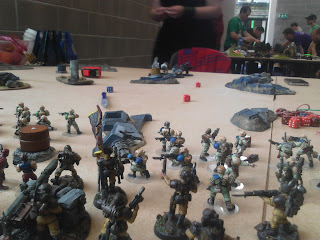 Another good game & the only one that was to see my warlord die all added up to what was for me a very enjoyable tournament Another win but once more don't ask me the score, but according  to my son inlaw Ralph with 3 wins & 2 lost's an over all finish of twelfth which if I'm not mistaking is the top half & that's not bad when you think I was using a list that I'd never use before, have what is most likely the only army in 40K tournament play that hasn't got one single reroll in it & that I was only playing for giggles.

Yes I tempted the dice gods with my army & they punished me but they also reward me, I seen megnob'z take wounds to lasgun's, iron priest's on thunder cav with a 2+5+ take wounds to lasguns & everything else that I pointed my lasgun's gun's at in the name of chaos & pulled the trigger, but the big reward was the fun I got from it all, as my good mate the Doc said if we want to remove all the dice out of a dice game why don't we just play chess ?

Well that was my Brocon I'll finish up with my thanks to all those who faced me across the table, Craig for all the hard work running the event & as always my thanks to you for dropping in & if you'd like to comment it would be welcome.