A little piece from my son this time out as he give's a little history on his warband's leader, take it away Paddy. 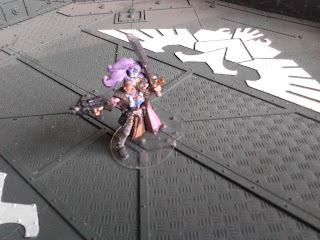 "Duchess" Anastasia Maxamillion is an Imperial Rogue Trader with a penchant for finer things in life and, to the outside world, an incredible amount of good fortune. Born Anastasia Helnhoff, the daughter to a lesser nobleman on a vital agri-world in Segmentum Pacificus, Anastasia learned young that just because a man has wealth does not necessarily mean he has intelligence to match, or more importantly, that he can resist a pretty face. Shrewd, ambitious and completely narcissistic she grew restless of her station in life and began spending more and more time with the various Merchant Captains and Imperial Navy Officers whom the nobility would entertain, hoping they would offer her some way to escape her tedium.

Anastasia's opportunity came when she attended a society function in honour of the Rogue Trader Sahib Maxamillion. Using every piece of cunning and charm she could muster Anastasia managed to secure a marriage with the aging Rogue Trader who clearly saw the woman as another body to use and then discard the next time he made orbit over an Imperial world. Instead it was Sahib who would be cast aside, killed in a freak accident shortly after Anastasia managed to turn Sahib's latest bodyguards, a low life former ganger called Flak Malcim and a former underworld killer known simply as Shade - both picked up only a solar year earlier on a nearby hive world- against the old man.

Inheriting her husband's wealth and more importantly his family's Warrant of Trade, Anastasia, now Anastasia Maxamillion, used her new found title to live like a Planetary Governor, and soon took to introducing herself as a Duchess, only performing her Rogue Trader duties when her credits start to run low.

Through her travels Anastasia has travelled the galaxy, from Segmentum Pacificus to Ultima Segmentum in search of the one job that would set her up for life, becoming one of the relatively few humans with a good working relationship with the Xenos of the Tau Empire, frequently working with Water Caste Traders and even welcoming a Kroot Mercenary as part of her crew. The tall wiry Xeno affectionately being dubbed "Bob" by Flak once it became clear its actual name couldn't be said properly without a beak.

Through out her travels she also won the possession of a living weapon that she one from very drunk member of the Ecclesiarchy that she was offering transport to a pilgrimage site. The Arco Flagellant was known is known only by his designation of Subject 48, with no clues left to who it could have been before whatever crime was committed that damned him to become a monster who's mere presence by his mistresses side has cause miraculous results during negotiations and who's activation has seen several soured business arrangements terminated in a whirlwind of lashing neural whips, flayed skin and shattered bodies.

With funds running low again Anastasia and her crew sets out to the Gravis Sector of Segmentum Tempestus and the strife occurring on the planet Fentis, because as she has learned over the years, where there is strife a Trader can profit.


A big well done & thanks there to Paddy & as always my thanks to you for dropping in & if you'd like to leave a comment it would be welcome.
Posted by Frank O Donnell at 1/21/2016