As veteran sister superior Alpine Sunset walked down dormitory C on her last rounds of the day of the orphanage   a little voice called out to her " Tell us for the legions of long ago when the heretic   & unrepenting  died at your hands when you fought with the convent of the Black Rose".

Alpine knew without having to look around that the owner of the voice was the young girl of about 7 or 8 standard Terra years brought in by Father Felix last week along with a young mute boy.

Always a kind & gentle soul but as brave as a space marine chaptermaster, Alpine turned smiling & said " why child such tails would come between young folk & their sleep if told at this late hour" this remark was greeted by the moans of a hundred young girls who had hoped that sister superior would indeed tell them a tail.
Picked by the Canoness for those very qualities when she became to old to deliver justices to the enemies of the Emperor of mankind Sister Sunset was put in charge of the orphanage to see to the development of future battle sisters & the job could not be in safer hands as far as Canoness  Margaret Merril was concerned.

The sister superior was sure that what ever story she told would not keep the young girl Eva from her sleep but there was more timid girls in the dormitory, girl that would serve the Emperor not as battle sisters but as sister hospitaller's or dialogus's, not wanting to disappoint the girls Alpine said "I'll tell you how sisters & squads of the Black Rose get their names instead.
Having heard this tail many a time before but having to much respect for the sister some of the older girl's turned over on their pillows to try to go a sleep, & after telling you that continued Alpine I'll tell you the story of how my replacement who is still to this day one of the Dominion squads leader brought death to the scourge of Lappin IV.

With that all the girls sat upright in their beds all thought's of sleep forgotten, why some of them had even seen veteran sister Joie De Vivre before, "thank you Veteran Sister" they replied all most as one.
So  she began, when a girl reaches a certain age & has proved her worth to become a battle sister, she must leave behind her birth name & instead pick one for herself from the many from of Rose's, all of which grow here on these very grounds.

From that day until the day of her death this is the name by which she shall be known & if she is worthy enough to become a sister superior then the squad she leads will be so named in her  honour, now you see if you can think of a name of a rose that you would like to pick while I tell the tail Eva she said.
War had be raging for many years on Lappin  IV & indeed across the whole Ordon system but try as they may the force's of the Emperor  where losing planet after planet, "The sister of the Black Rose had by this stage been fighting on Lappin IV for just over two years but by this stage it was only the main continuant which ran mainly a long the planets equator, so out side of the cities was very lush jungle.

It was out in these jungles that the Tyranid entity got his name the Scourge of Lappin IV, a massive Mawloc that was costing major damage a long the supply lines, at first it was thought it was numerous mawloc's & it was only after the Machanicum had come up with a device that they shot into the beast to track it that they learned it was only one
Alpine looked around her every girl in the drom was hanging on her every word, even with this device now implanted in the Scourge it still managed to bring death & destruction every time it broke the surface & try as they may no one could bring about its demise, that was until Joie De Vivre did a very brave thing.

Out on petrol with her Squad, the scanner in the Immolator picked up the tracker in the Mawloc, now its a well know fact the a Mawloc can detect the lightest foot step on the ground & this is what gave Joie her idea.

Seen a ruined building up a head & order the crew to stop the Immolator & to kill it engines, "this is what were going to do" she said I'm going to get out & run to the ruins a head, drawing the Mawloc after me while you's wait here, no they all started to protest but she cut them off at once & continued,
when you see the beast start to break the ground gun the engines & smash right into it at a fast a speed as you can. 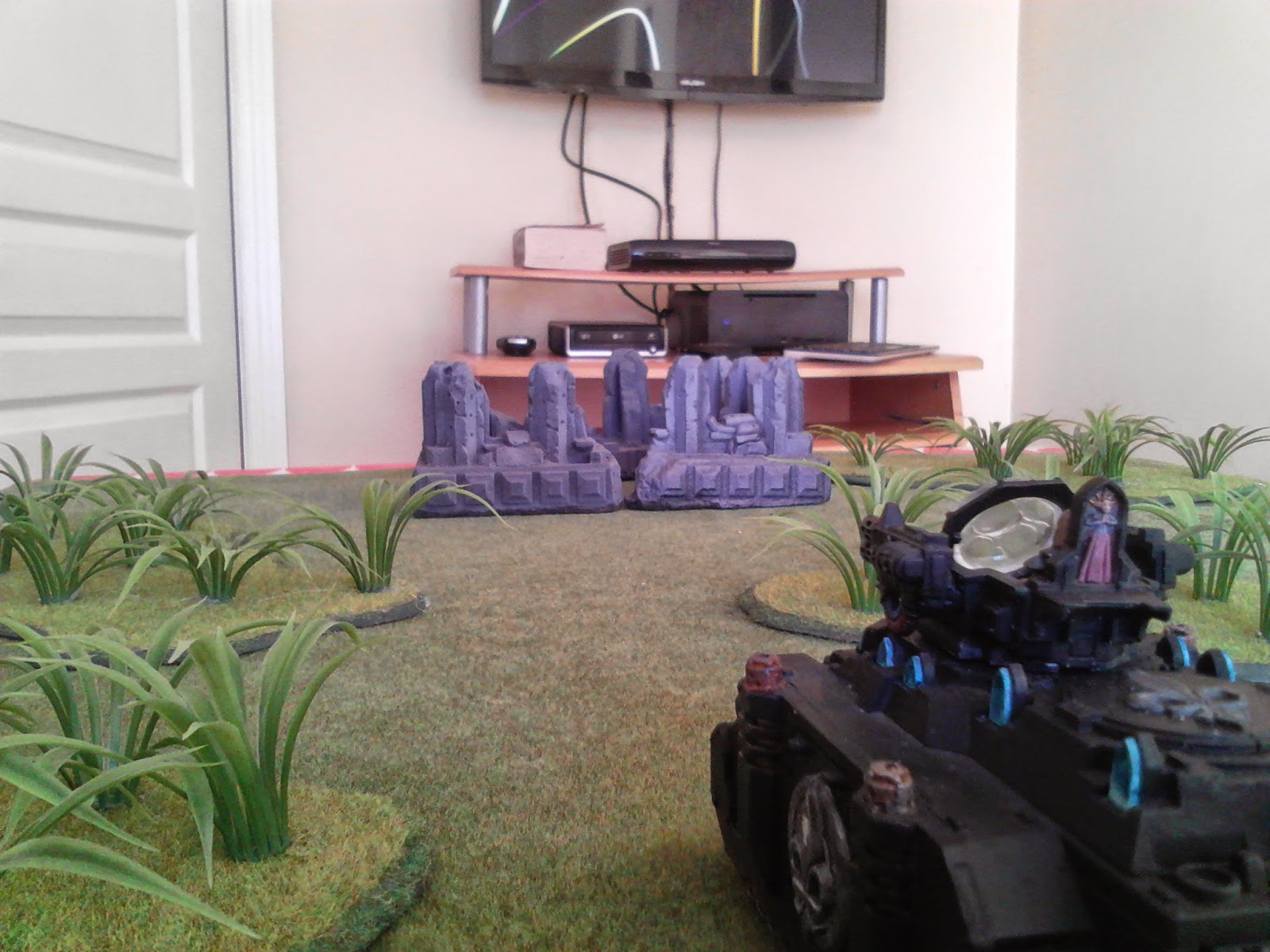 That should hopefully stun the beast & together with the harder ground in the ruins give us enough time to kill it before it can re-burrow  & with that she was gone out the ramp of the vehicle running at full speed to the ruins, on the scanner the sisters watched the blips close in.

Joie made it to the ruin just in the nick of time, & found the ground start to move under her feet & was starting to fine it hard to stay on them, but Joie knew that that to fall over now would be her death, she need to stay upright until the last moment when she would try to leap clear of the danger zone. 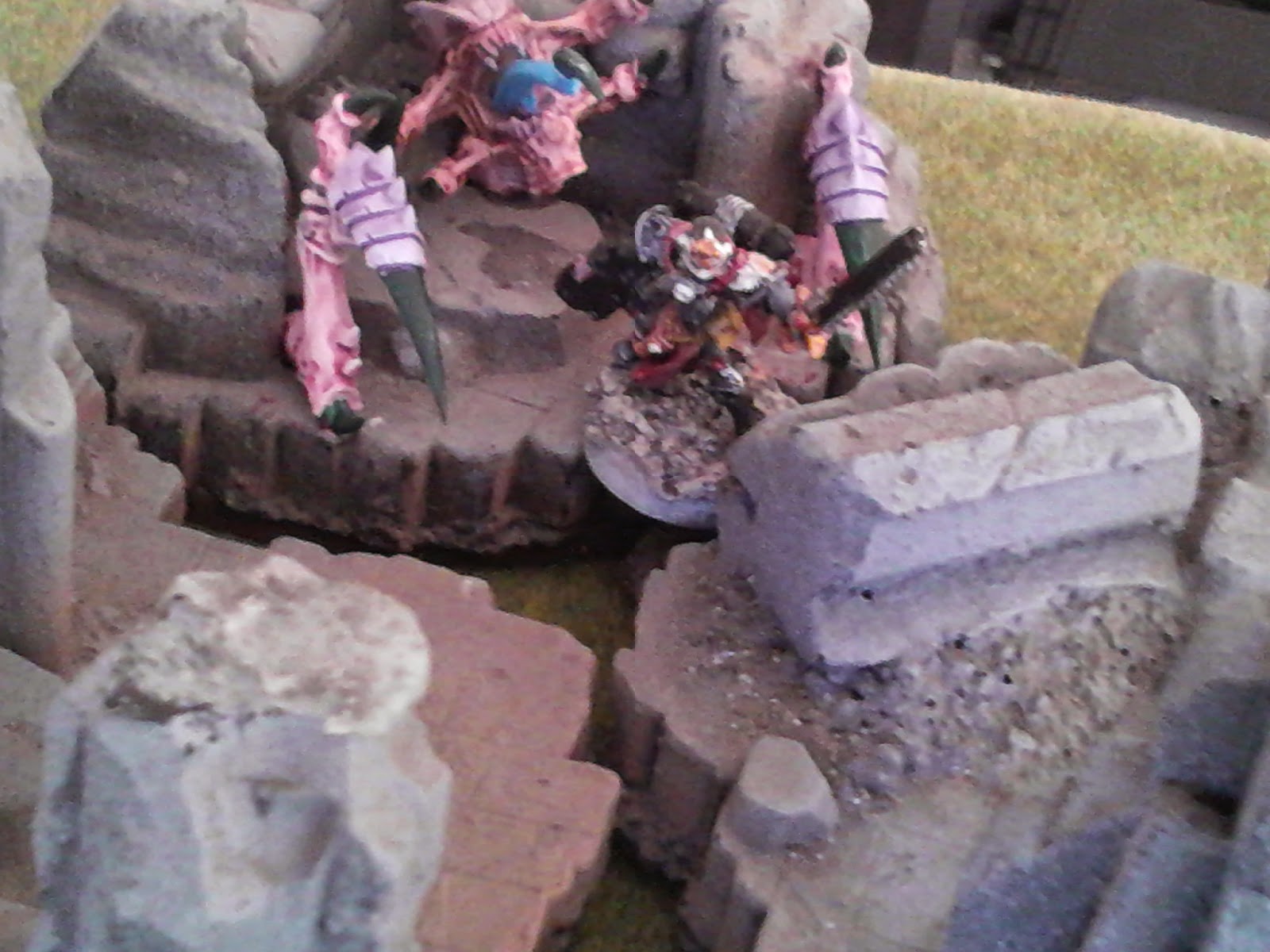 Back in the Immolator the rest of the squad a long with the crew watch with baited breath, & the minute they seen the ground erupt shot forward in the machine quickly picking up speed know full well that to drive into the runs at such speed would be fraught with danger, but their sister was a lone up there & depending on them. 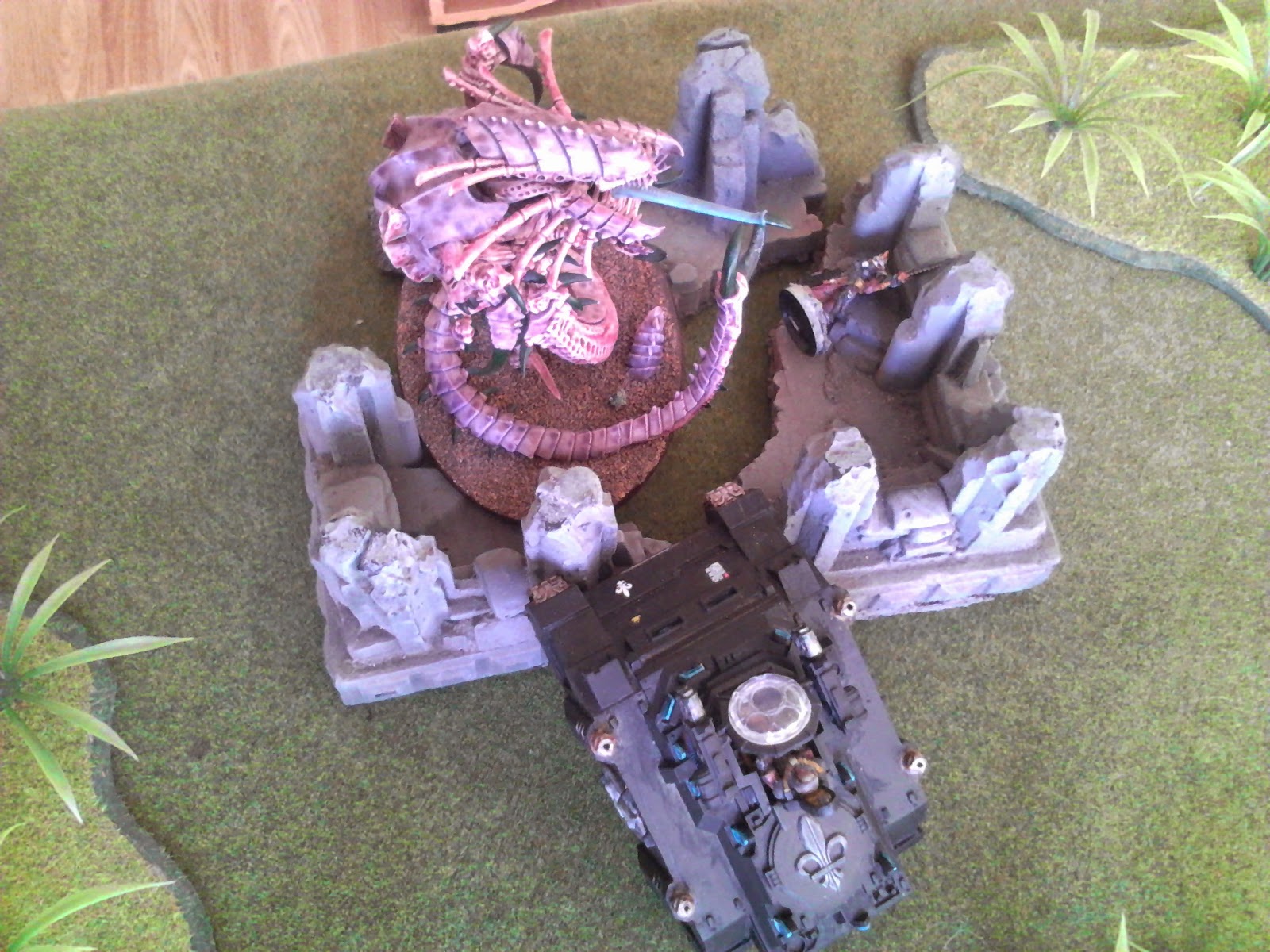 At the same time in the ruins Joie made her jump, but did not get far enough away & a large piece of masonry came down on her leg just below her knee sending a shooting pain through the battle sister, Joie didn't need anyone to tell her the leg was broking but she hadn't time to thing on it now. 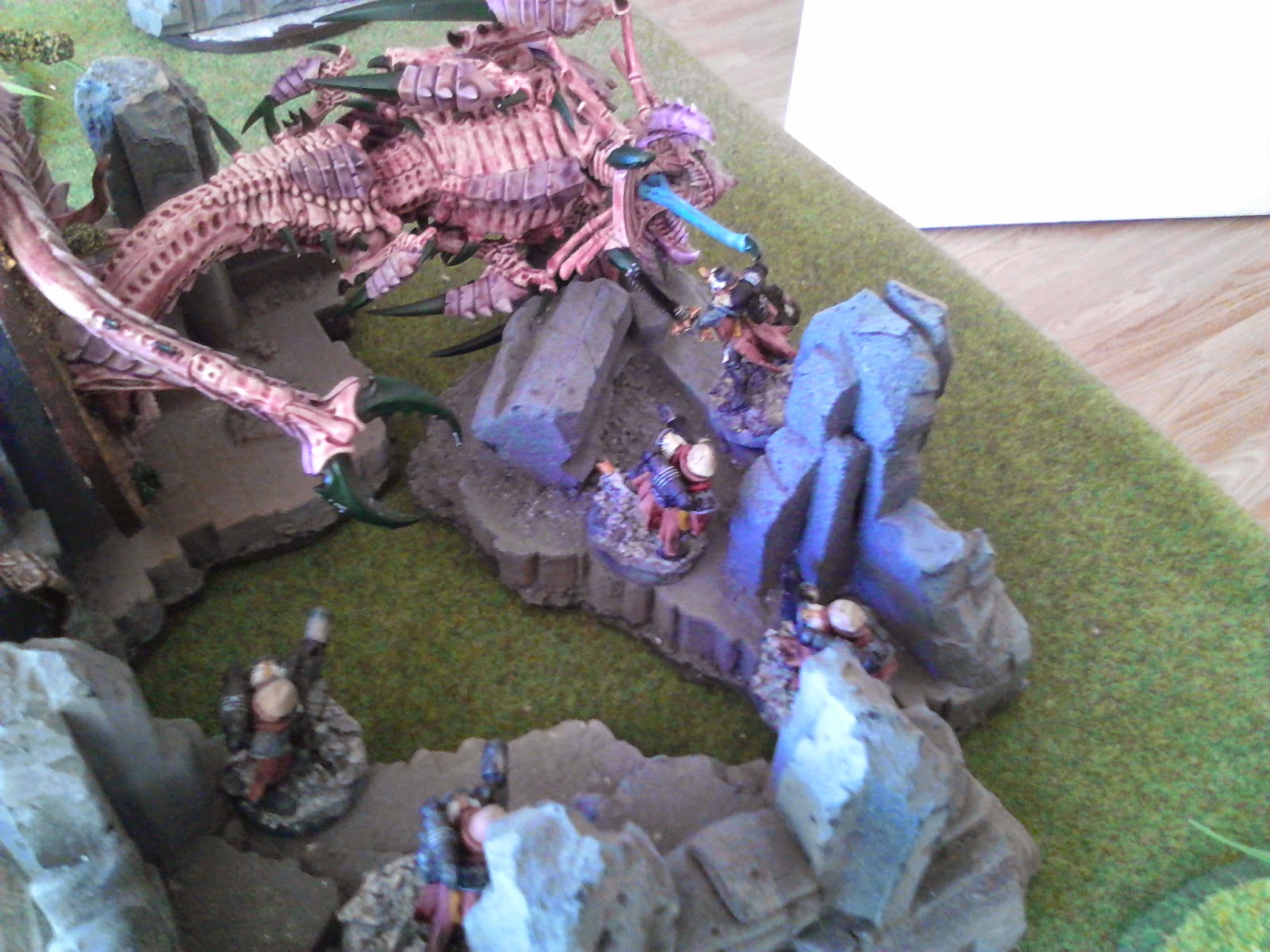 What only took a moment to take place seemed to all of the sisters to take a lot longer, no sooner had Joie hit the ground then the Immolator came smashing into the Mawloc sending it prone a cross the floor & like a flash the Dominions where out of the Immolator pouring beams of melta fire into the beast, gain her feet & ignoring the pain Joie added a couple of plasma shots from her combi-bolter. 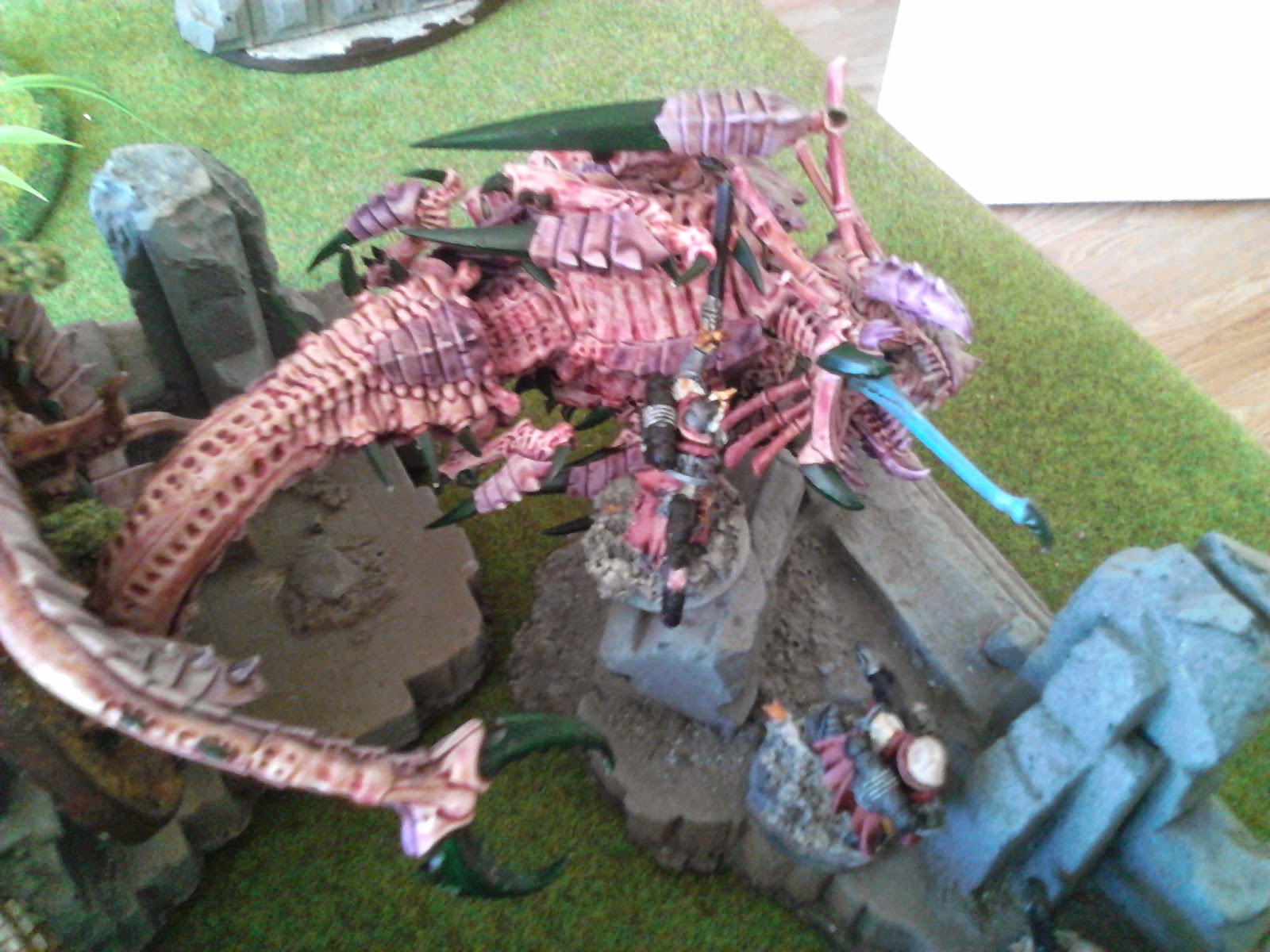 With the Mawloc drawing its last Joie came forward & drove her chain-sword into its neck bring a end to the Scourge of Lappin IV, so Eva have you though of a name yet Alpine asked ?

It just so happens I have sister superior the young girl replied I'm going to be know as Summer Time & when I become a battle sister she said & she smiled a smile as bright as any midsummers day sun,
Alpine didn't doubt for one minute that she would go on to be a battle sister & that Summer Time would be up there with the best of them.
Had it really been 23 years ago since that night the young Dominion asked herself ? Summer Time had only ever cried once in her life that she could remember & that had been 14 years ago just before she joined the sisterhood at Alpine Sunset's funeral, the ramp of the Immolator smashed down & Summer Time was back in the here & now fighting the enemies of the Emperor.


Well that it folks as always my thanks for dropping in.
Posted by Frank O Donnell at 3/26/2015