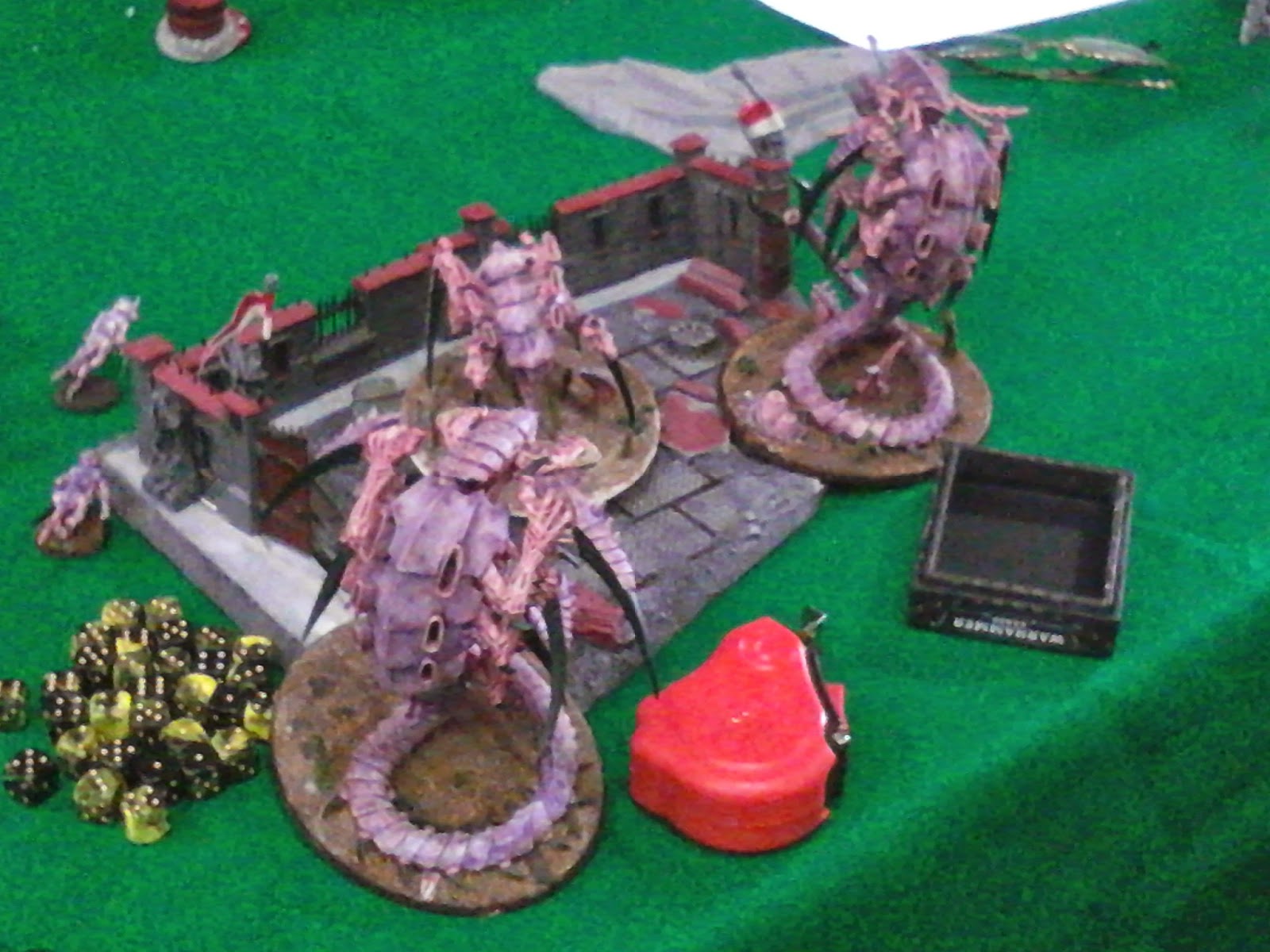 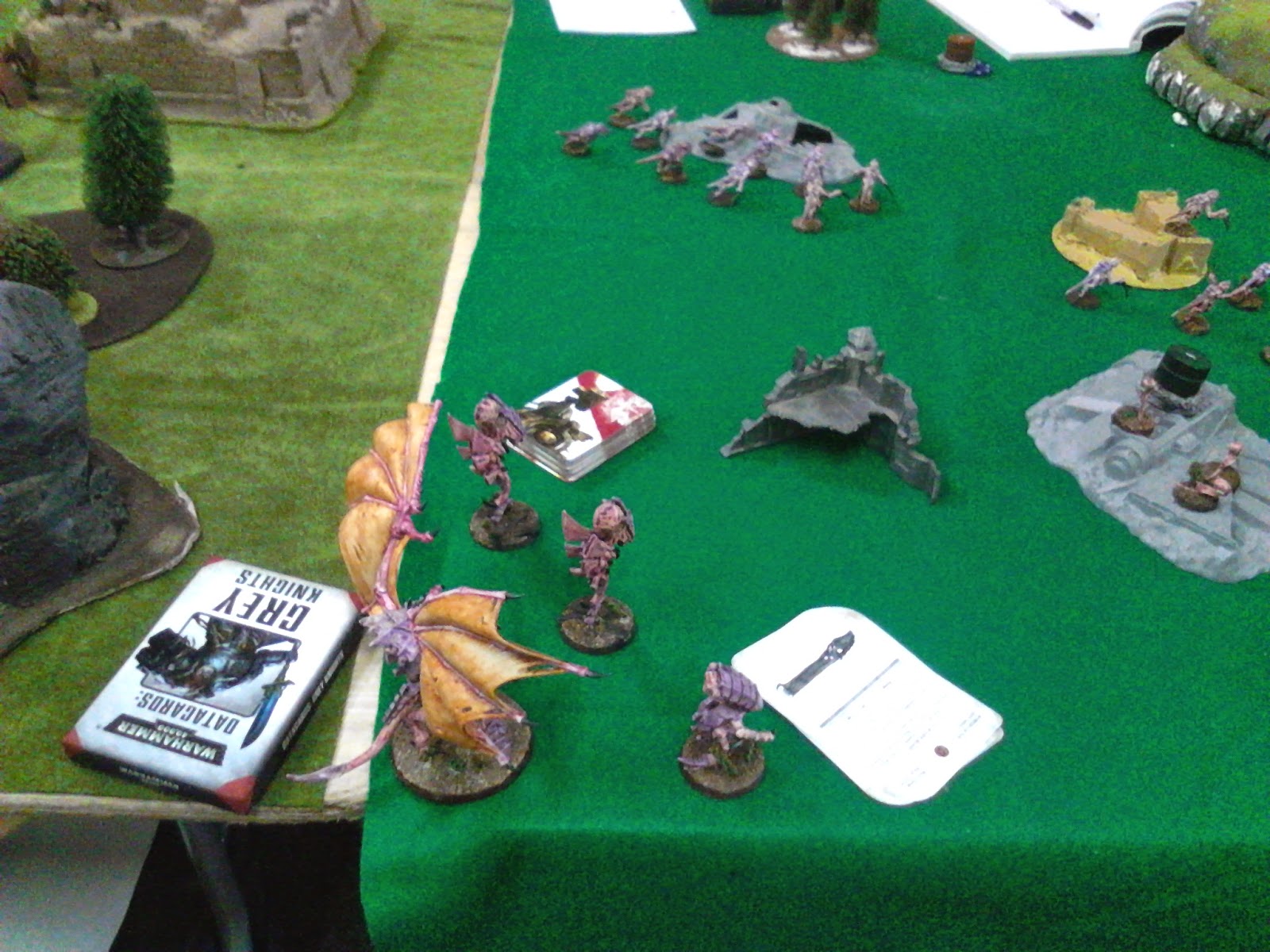 First game see me go up against Alex a top tournament player with an Elder army built around 3 wraithknights & 3 waveserpents  with a Elder witch on a bike, a real baptism of fire, this believe it or not was my first time facing waveserpents since they became the must have & with Alex winning the role to go first left me unsure what way to deploy. 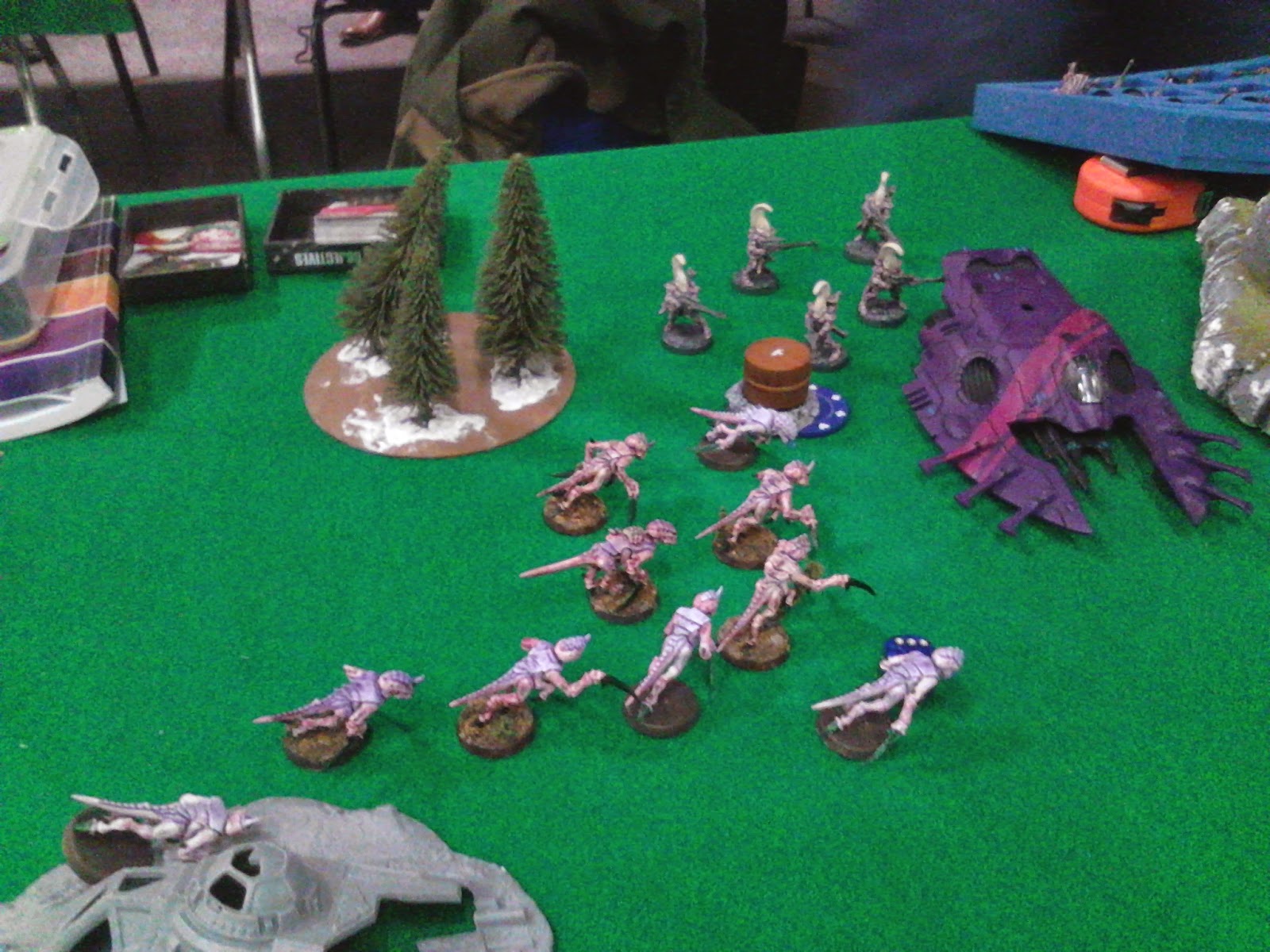 My mistake here was deploying the warlord flyrant instead of one of the others even if I was able to place him right in the comer where Alex couldn't shoot him, My next mistake with him was forgetting that I'd rolled the WT that gives him FNP in my next movement phase after he takes a wound, so all of this with some other facts that I'm not going into (newB) , but one I will bring up is that if Alax didn't roll another 6 on his shields shooting for the rest of the event then the dice just might have even out for him lol. 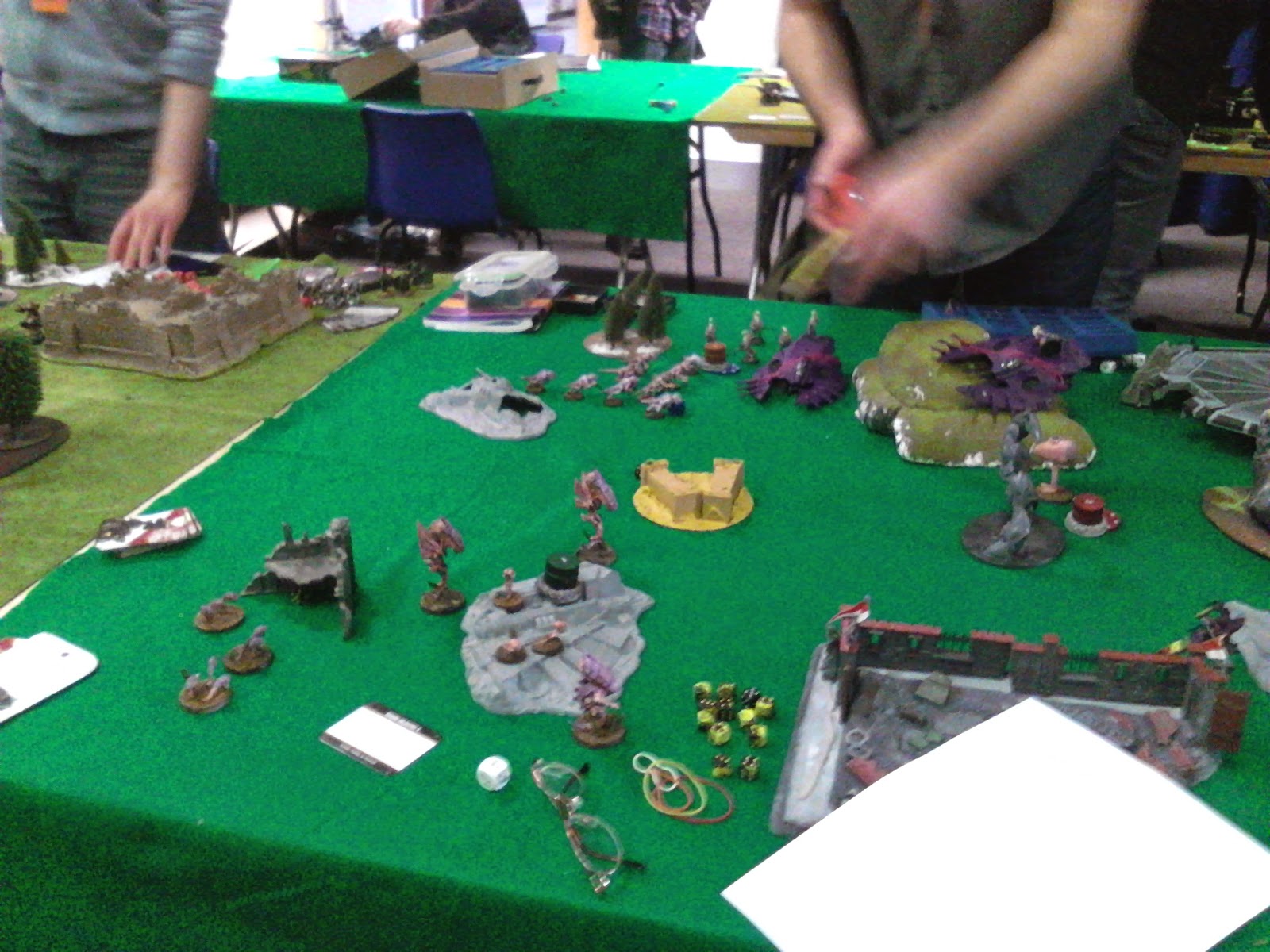 The result a 19pts to 1 win for Alex so well done to him& at least I had my first my point on the board only 19 more to go, I need to add here that despite getting my butt handed to my I enjoy this game very much, I've know Alex a couple of years but this was my first time playing him, so if nothing else newblood even if I didn't spill much of it that wasn't my own lol. 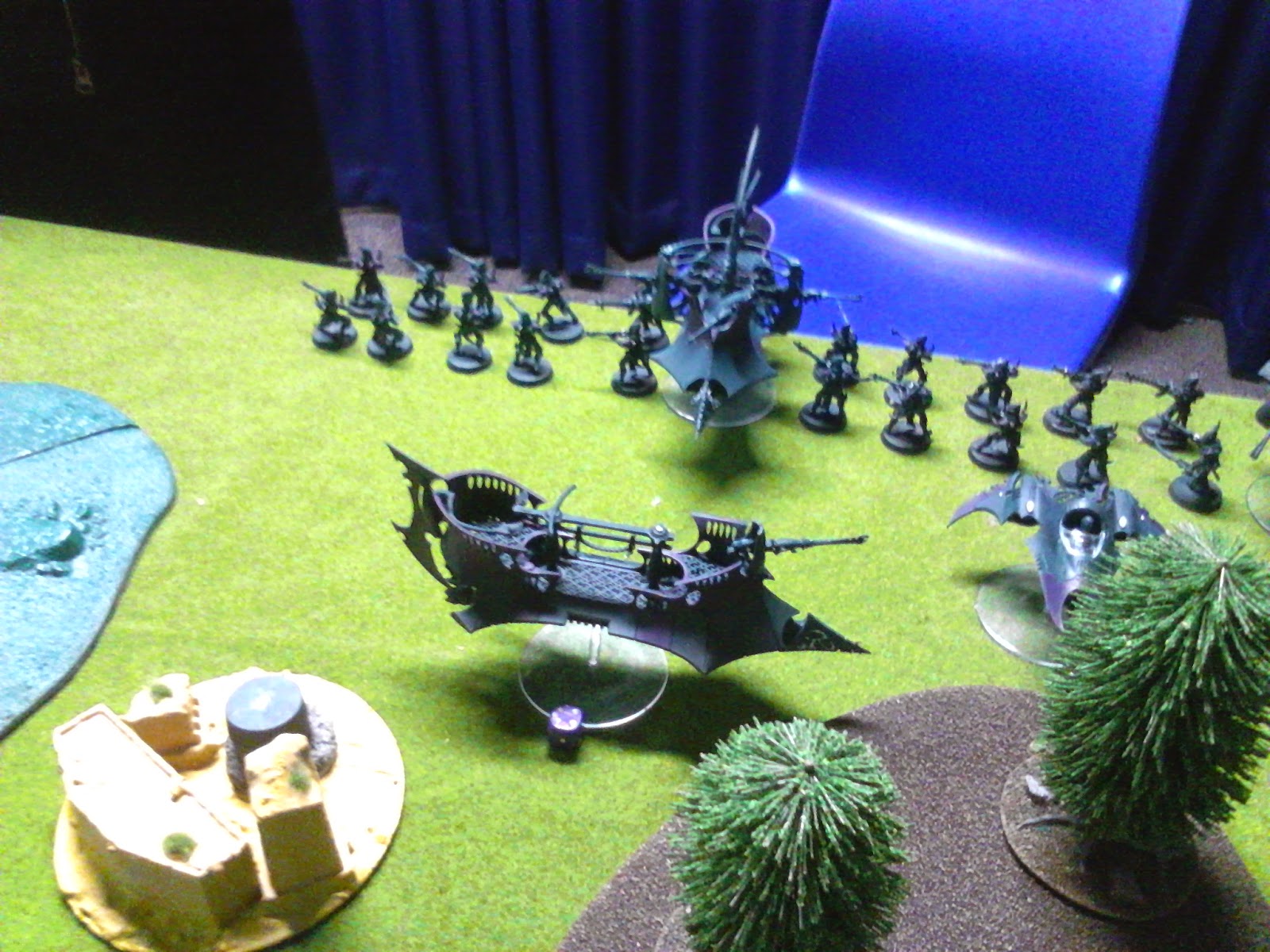 Next game up & it was the Elder's darker cousins played by a lad called Jack who I didn't know so more newblood hopefully I could spill a bit more of his then I managed in the first game.
This time I won the roll off for to go first & with a big wall I could hide behind in cased I got mugged I deployed all 3 flyrants, once again there was no night fight thankfully as the last thing I need was their boats having a 2+ cover save. 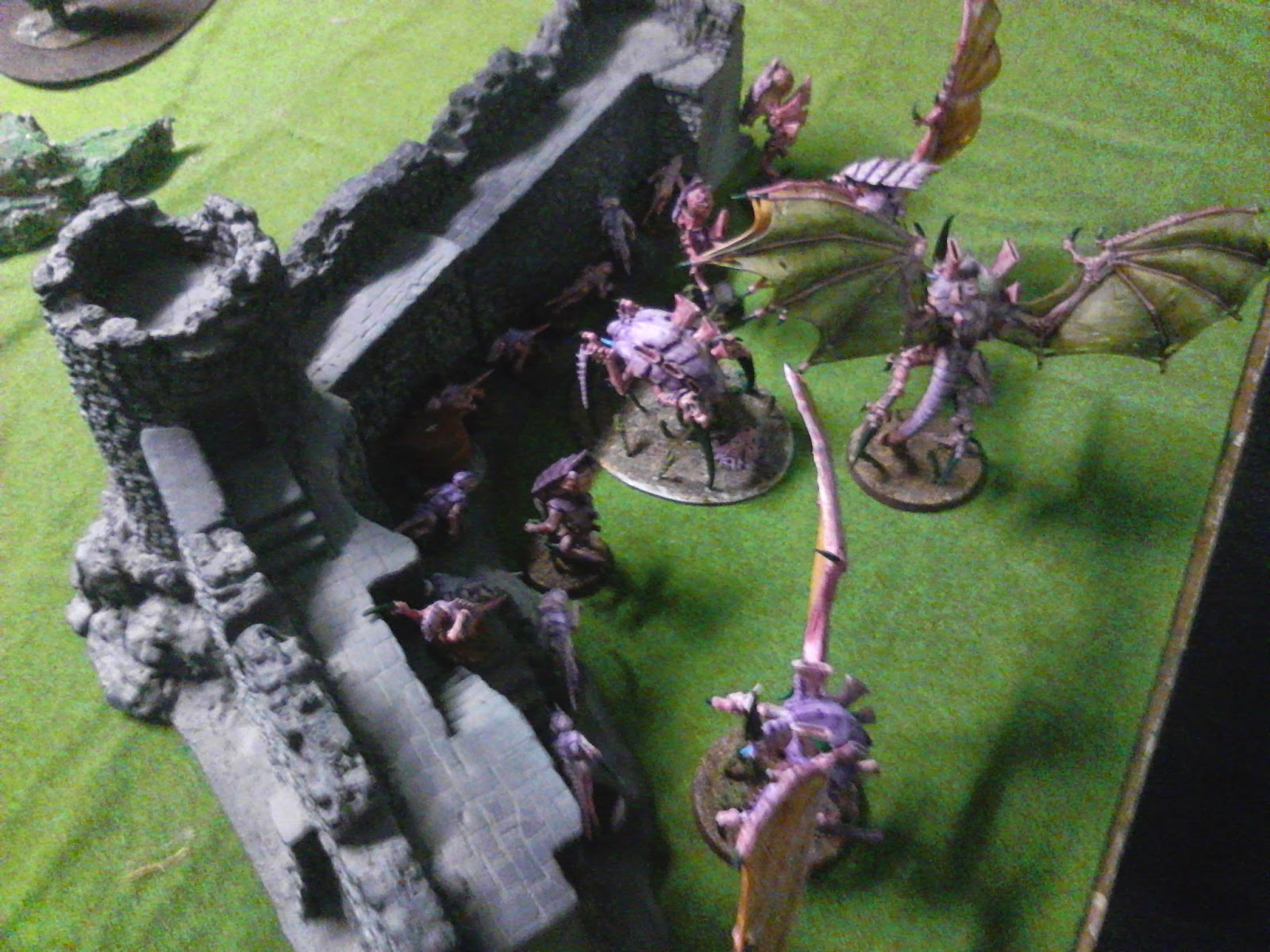 Even so they did have a 3 plus but the volume of fire from the flyrants was such that the boats started to sink & while he did put some hurt on a couple of the flyrants, with out down to it's last wound he couldn't bring one down, but I might as I'd to take a grounding test but lucky for me I pasted. 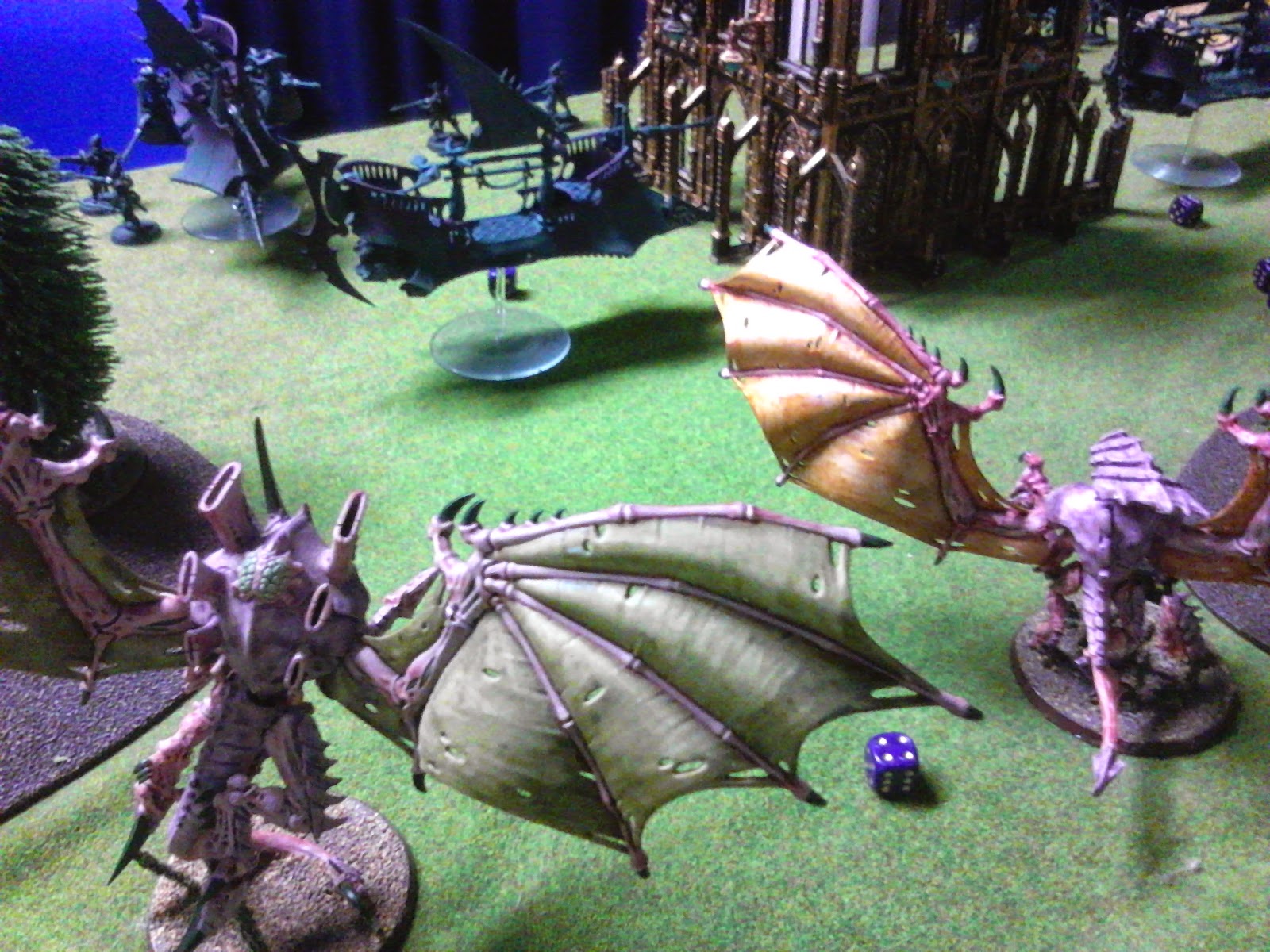 With Mawloc's now adding to his problems poor old Jack was now on the back foot & while Jack put up a good fight it was going to take something of a miracle for him to now turn this one around, a last he could not & but the time we got to the end his warlord & a flyer was all that was standing, Hive fleet Nagaina gets its first win. 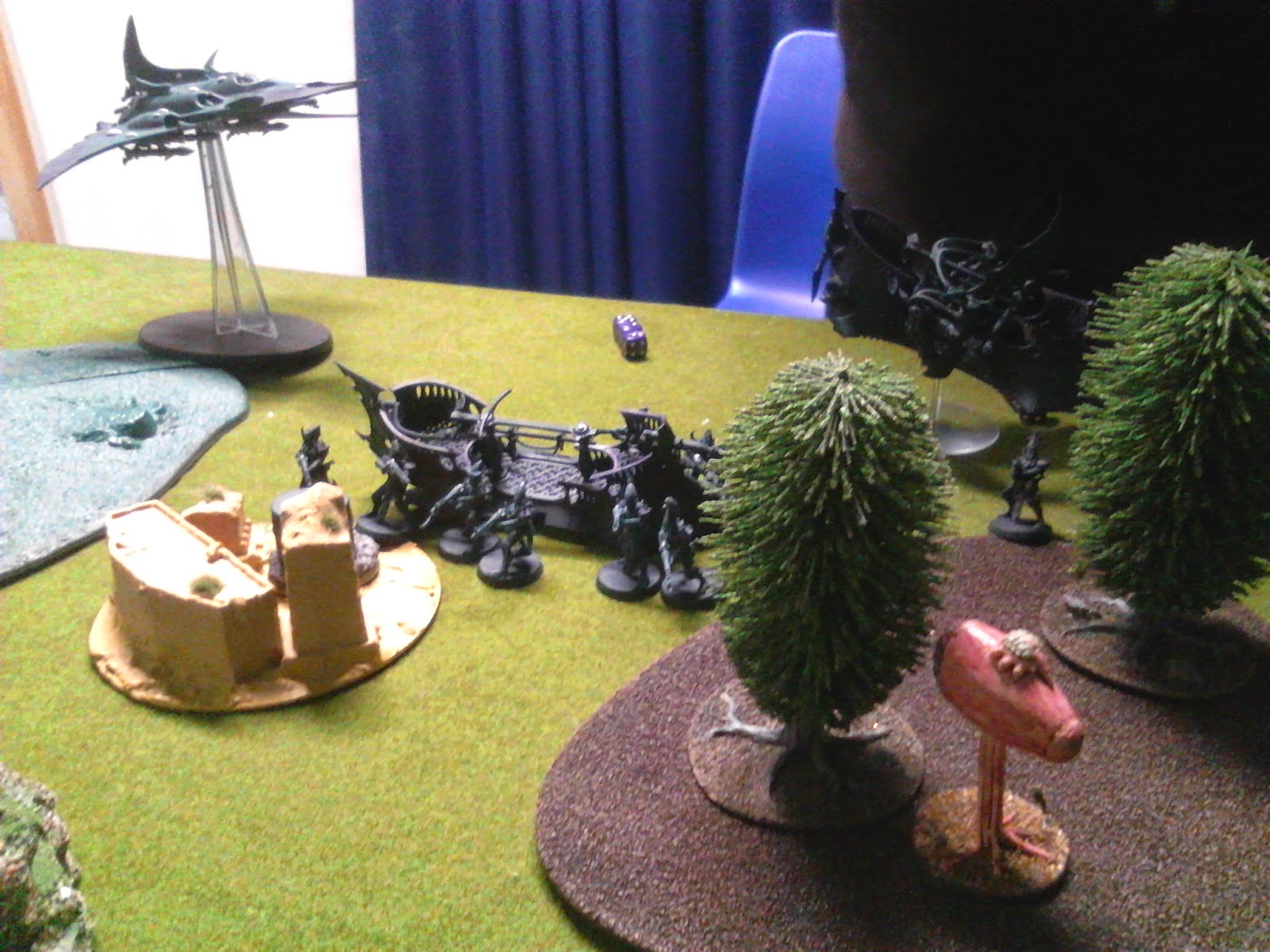 17-3 win for me & again another very enjoyable game, I like the way the missions are done as it makes it very hard for a player to get a 20-0 result, even if I do find them a little bit confusing but nobody likes to lose 20-0 so its a small price to pay & I just put it down to part of the learning curve.
Jack was a very nice guys & good fun to play which is win win. 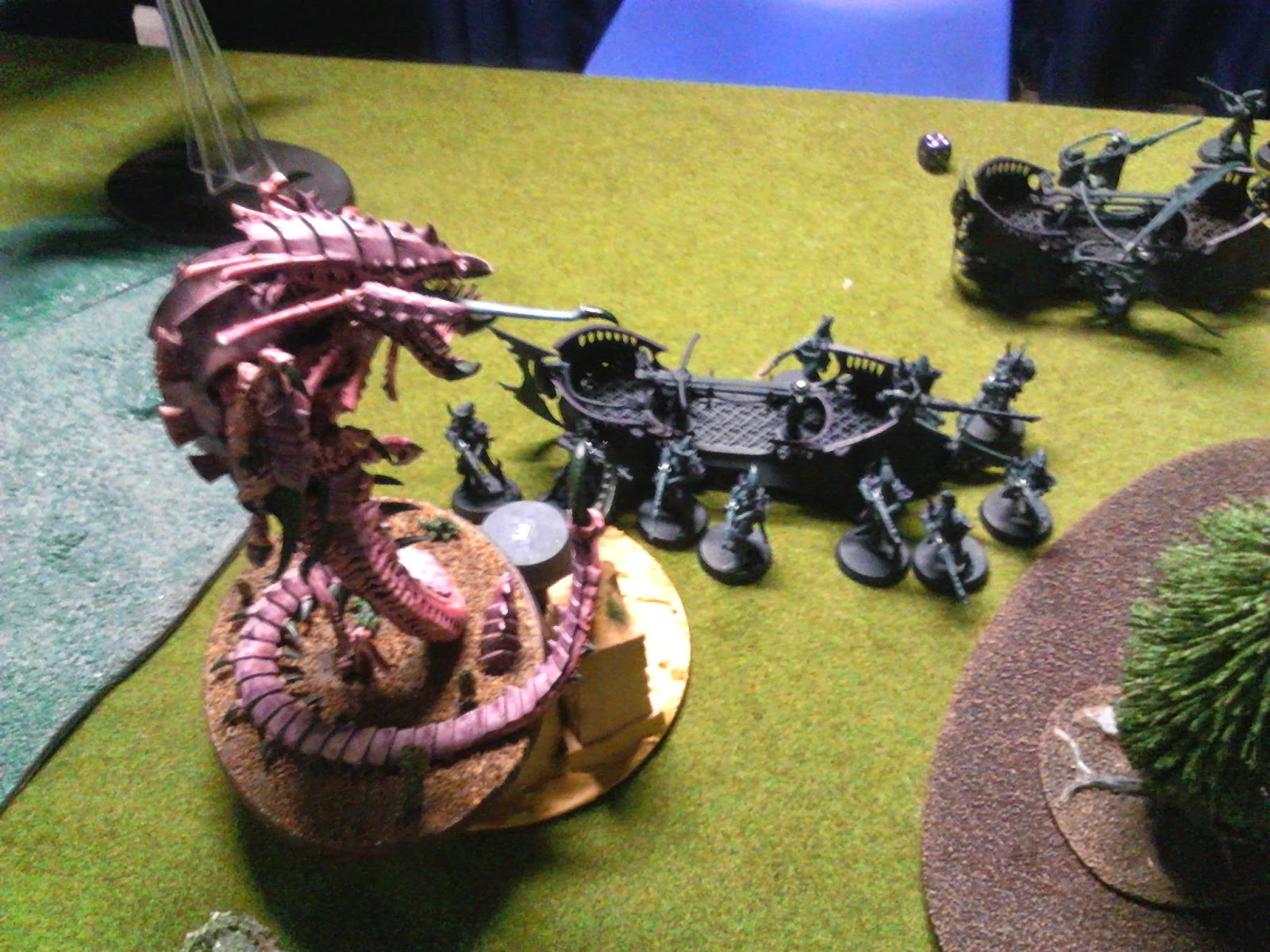 My last game was against Alan with his very different daemon army, put it to you this way I think Alan has a great liking for the upper part of the other sex lol, I have played Alan before but as always was happy to play him again as he's one of life's nice blokes & his army is always full of nice eye candy if you get my meaning. 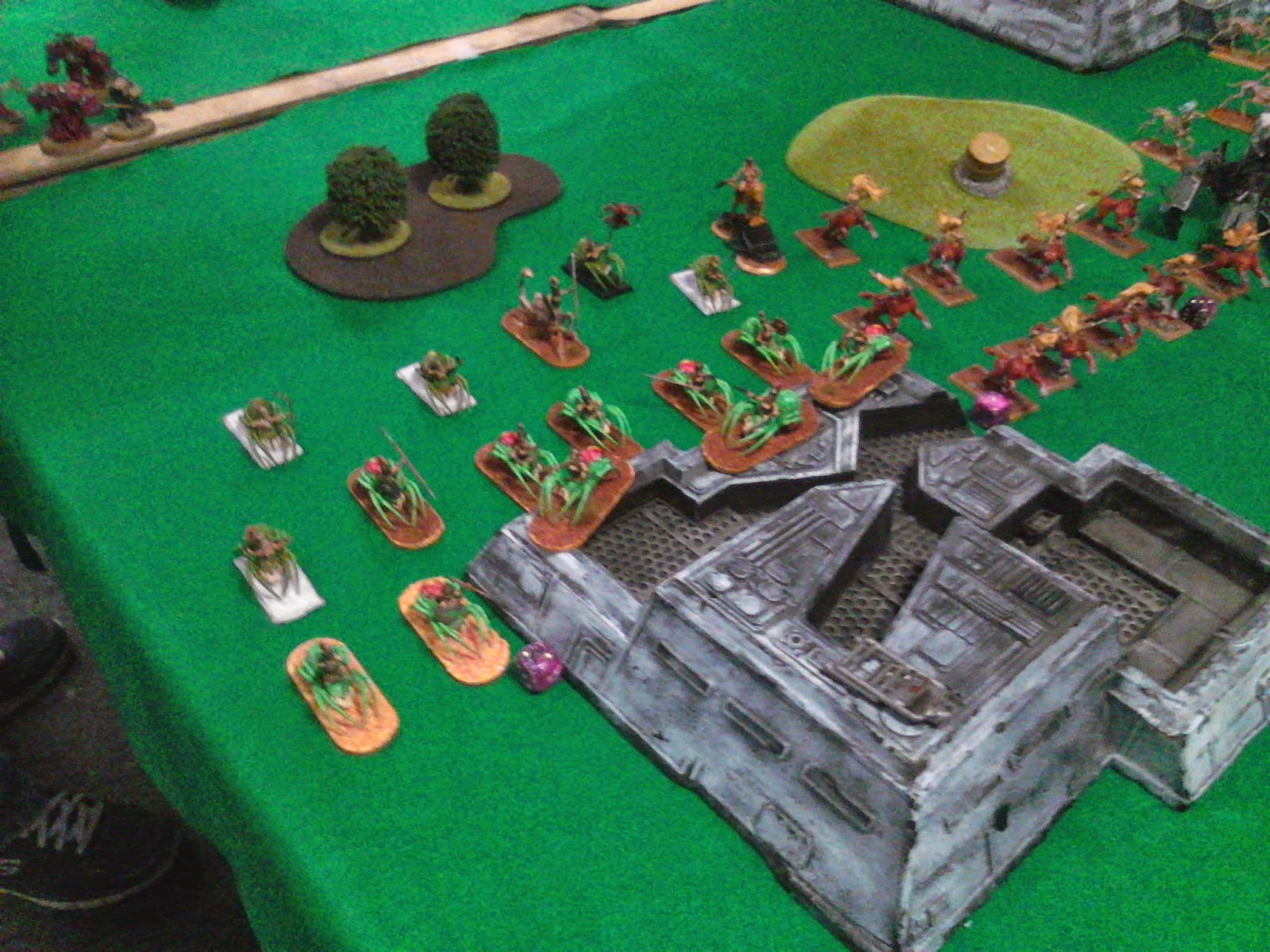 Once more I won the roll off & went first & started with the 3 flyrants on the table, for the first time it was night fight which suit Alan a lot more then it did me, as a part from a lovely soulgrinder Alan has no shooting in his army as all he wants to do is to get you into deaths loving embrace. 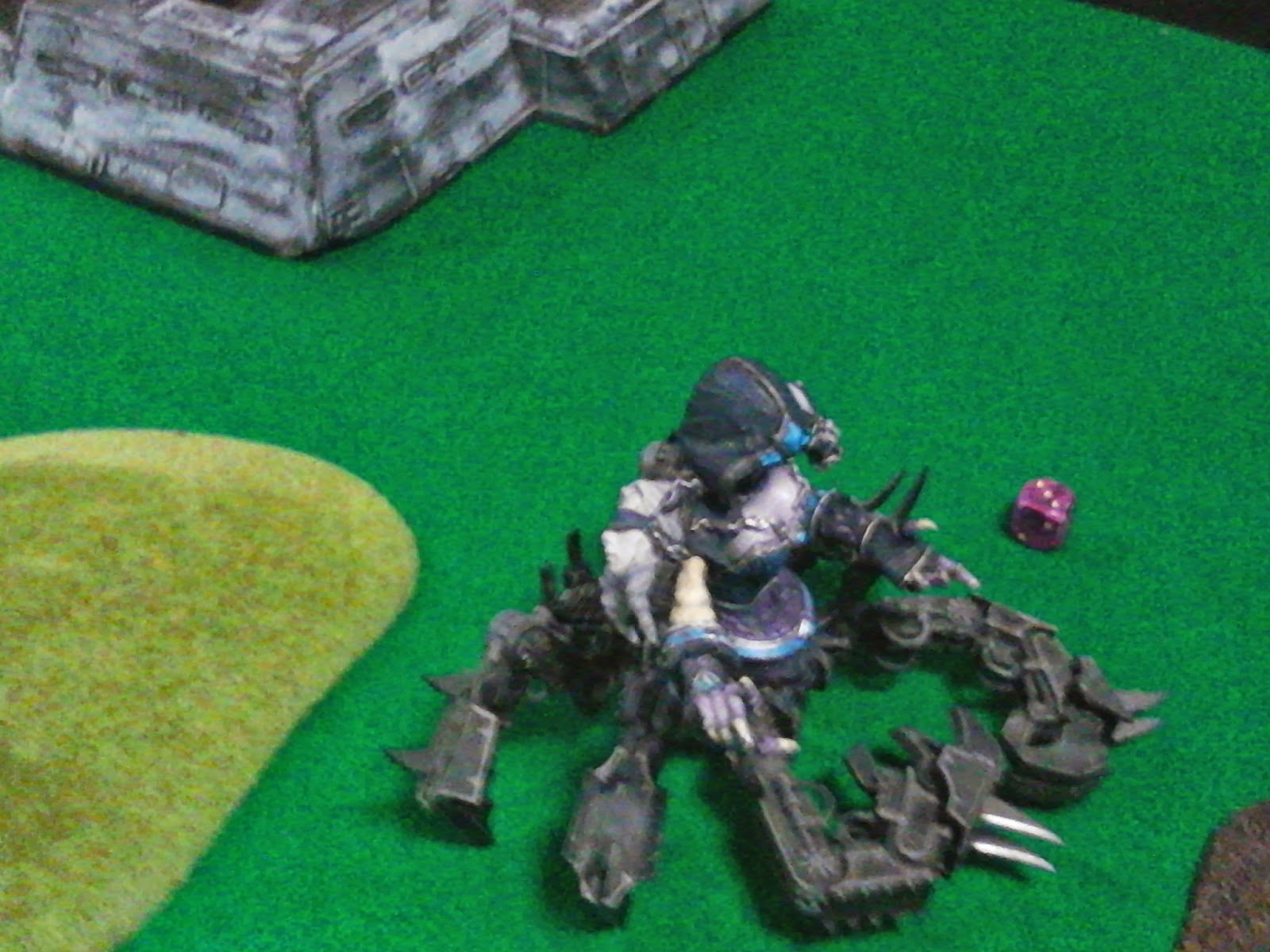 First blood was to be the high light of this game, with me managing to get off warp blast to get a pen on the grinder, Alan failed his I think it was a 3+ save first blood could be mine but yes you guessed it I rolled a one. 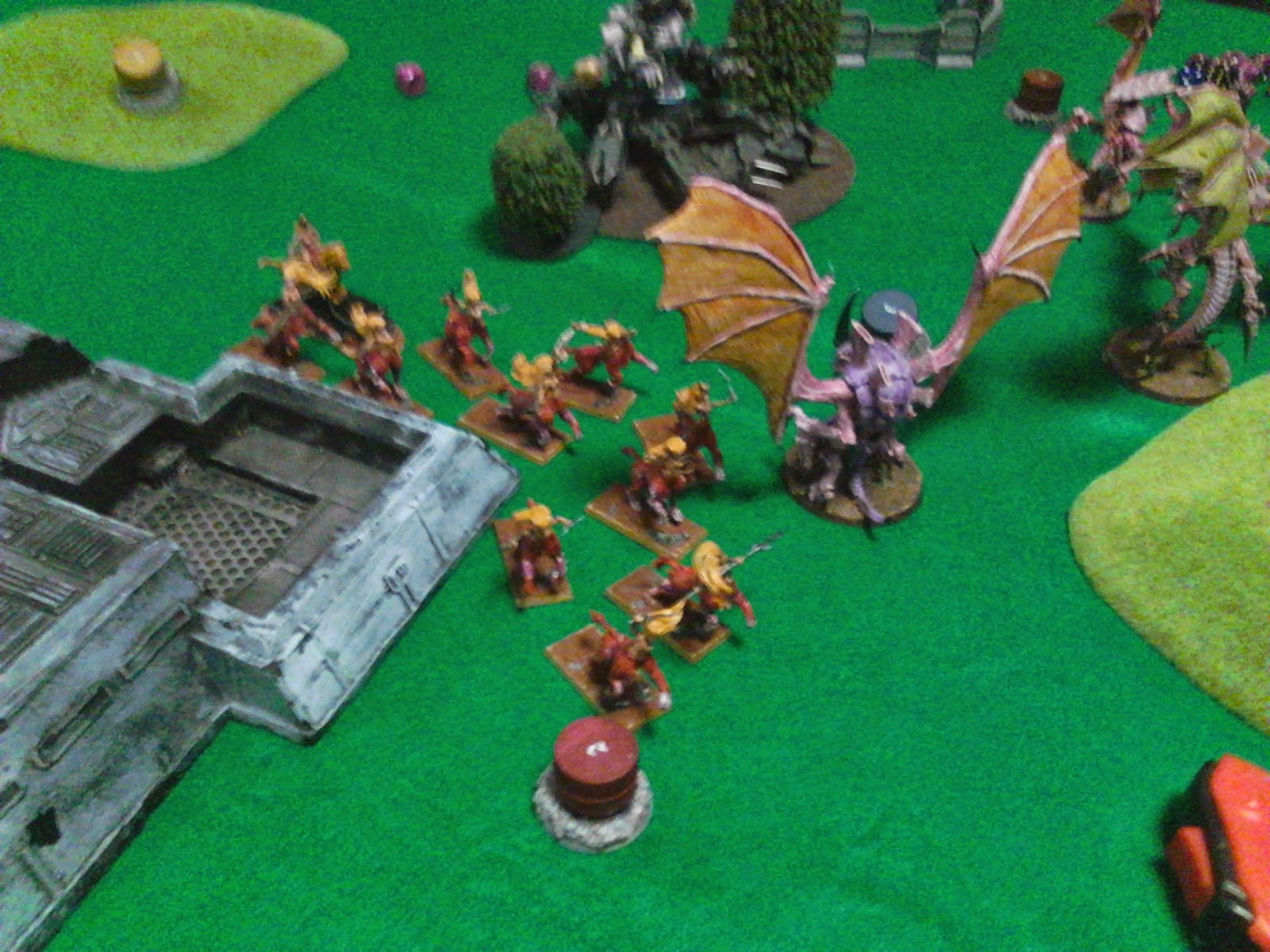 I might not have got first blood but the flyrants have done a lot of damage to Alan's army, so Alan carries on pushing forward & then we come to the interesting bit, Alan's shooting phase where he rolls on the warp storm table. 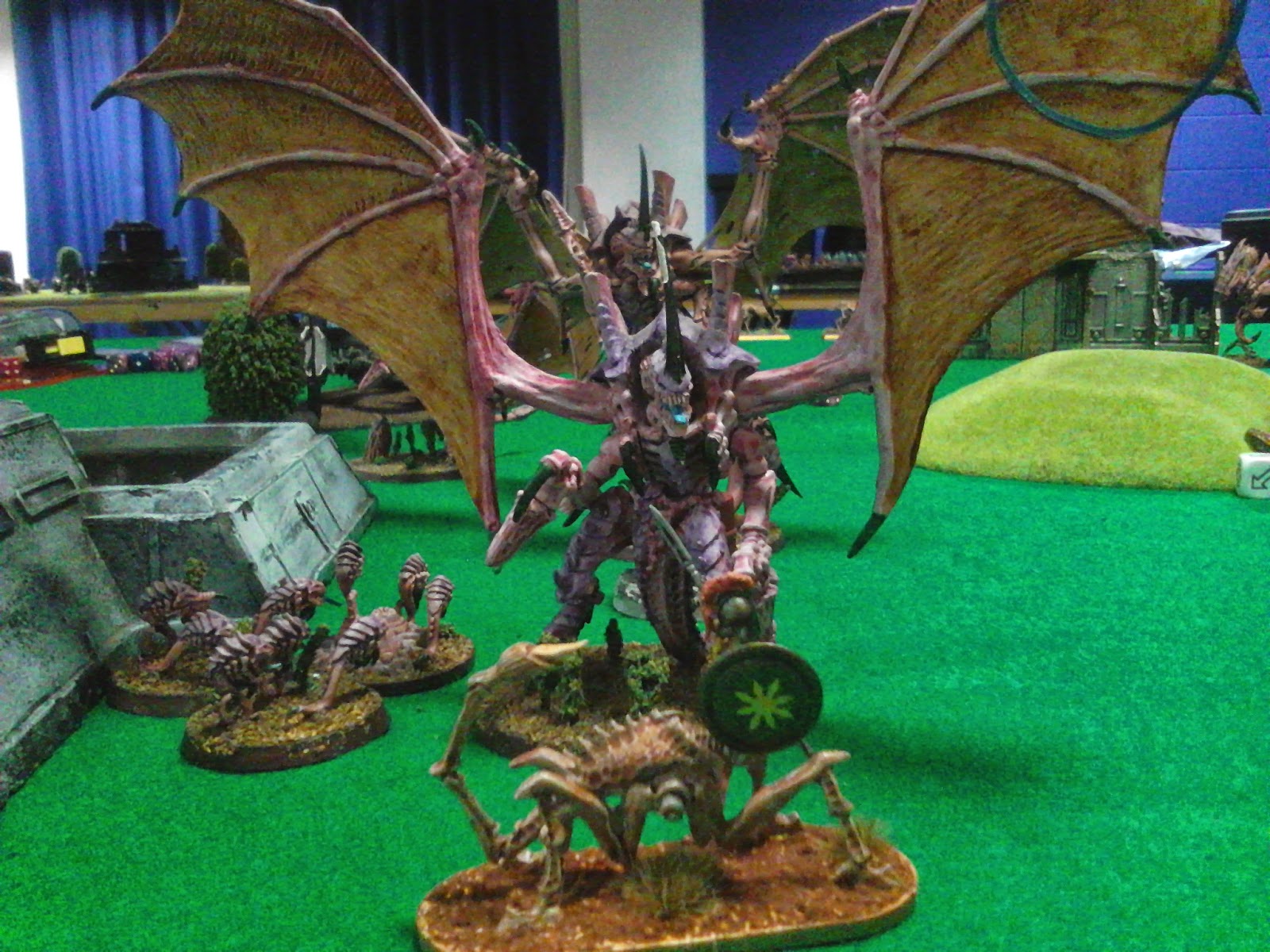 11 one random enemy psyker take a ld test on 3 d6 & if fails is removed from play with no saves of any kind allowed, not what I want to hear as this could give Alan not only first blood but also slay the warlord if the dice gods see fit to really rub my face in it. 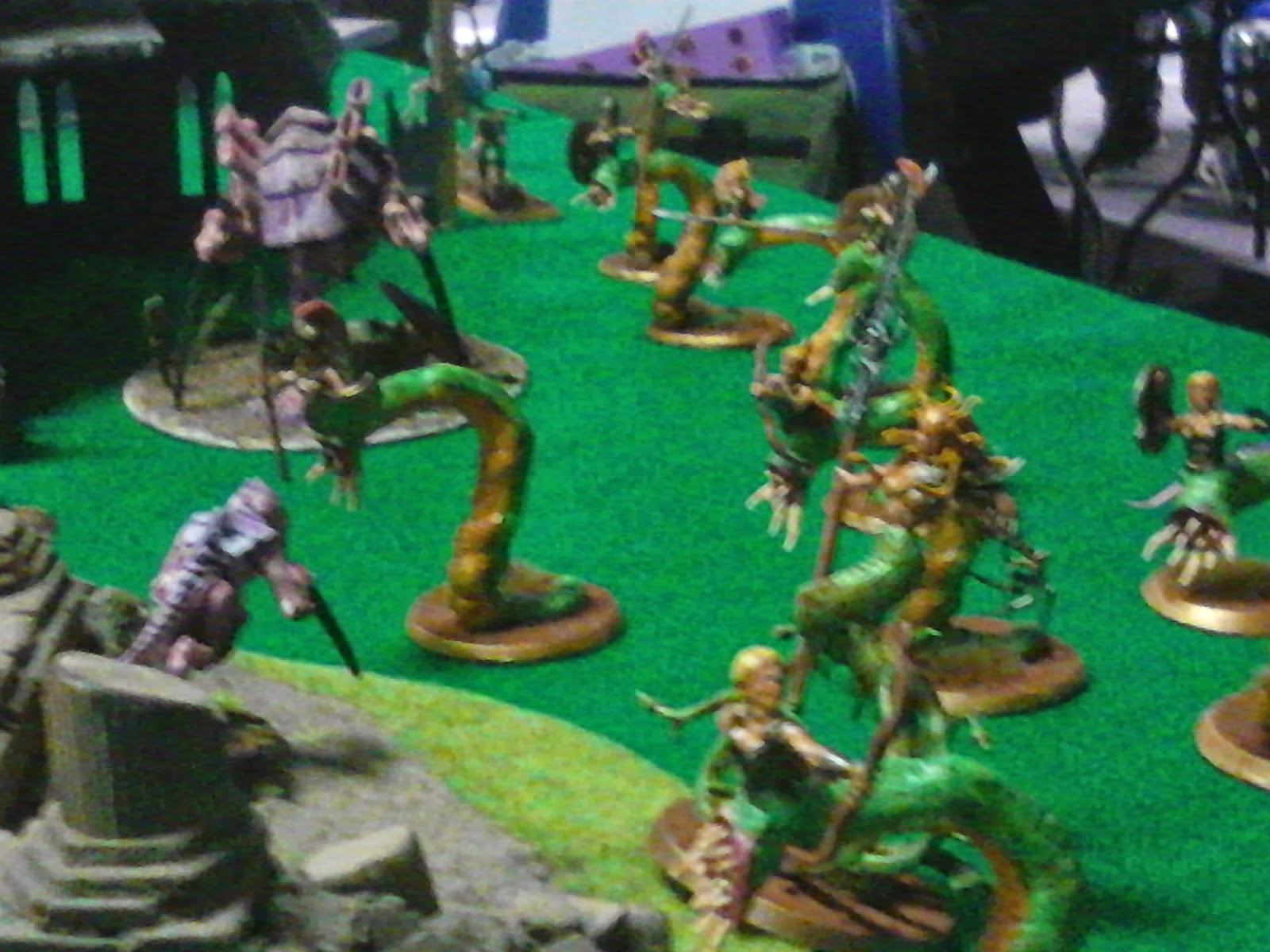 With 6 psykers on the board its 1 in 6 with the warlord been number 1 on the roll what could possible go wrong ?  this time if it wasn't for ones doesn't come into play & a zoanthrope takes the hit, I roll 12 & Alan has first blood & a new herald. 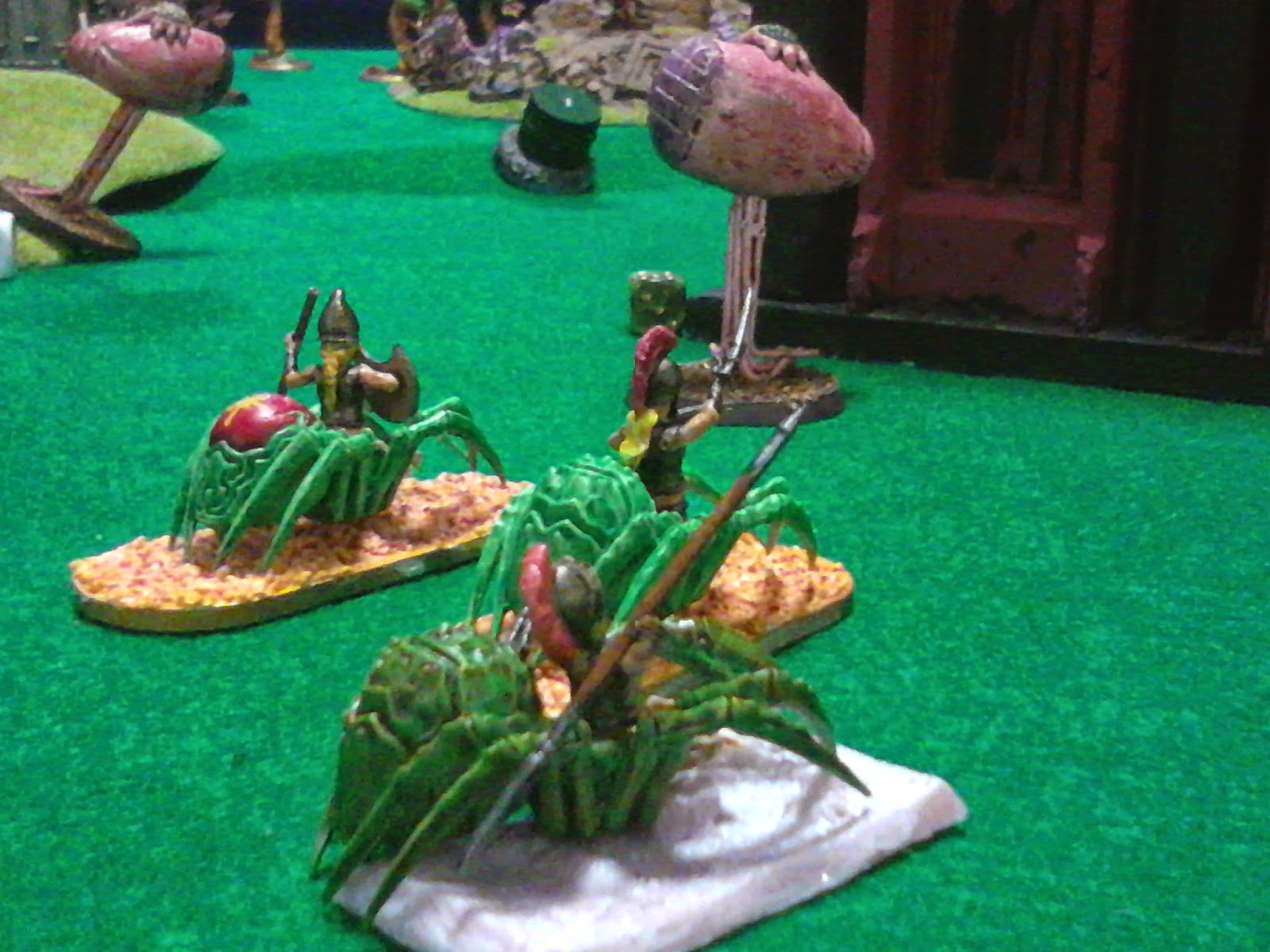 Between flyrants & Mawloc's who had by now seemed to have gotten the hang of this whole deep strike thing poor Alan's ary was ripped to shreds, now if only they could learn to hit & run, we rapped the game up at the end of turn 3 as we had agreed we'd finish up at about 7.20 as there was buses to be got. 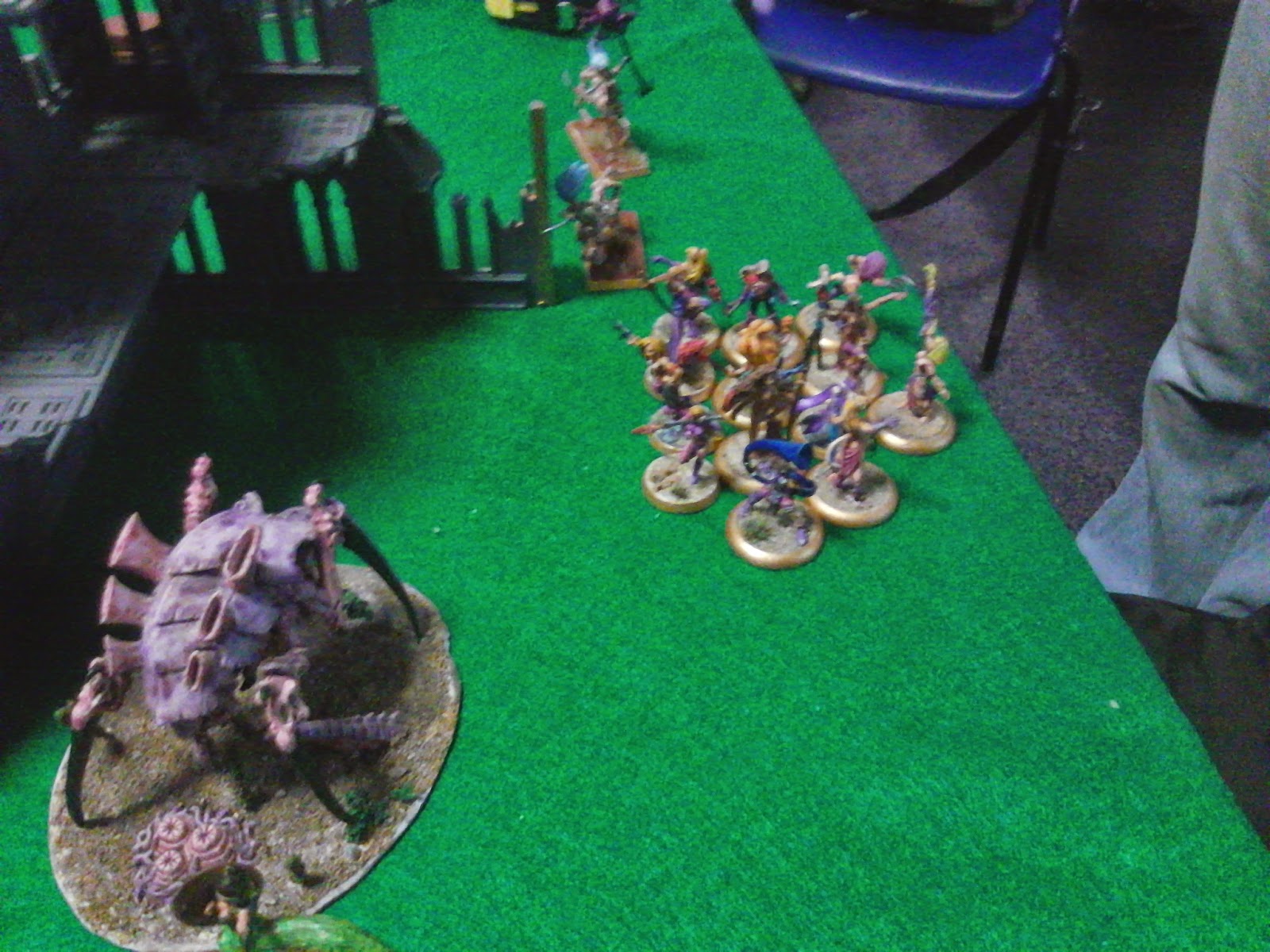 Well on top by this stage we count things up with the result 15-5 in my favour & as is always the case when I play Alan another very enjoyable game, so 2 wins for Nagaina & I've scored a total of 33 points but not only that I've had a great day out. 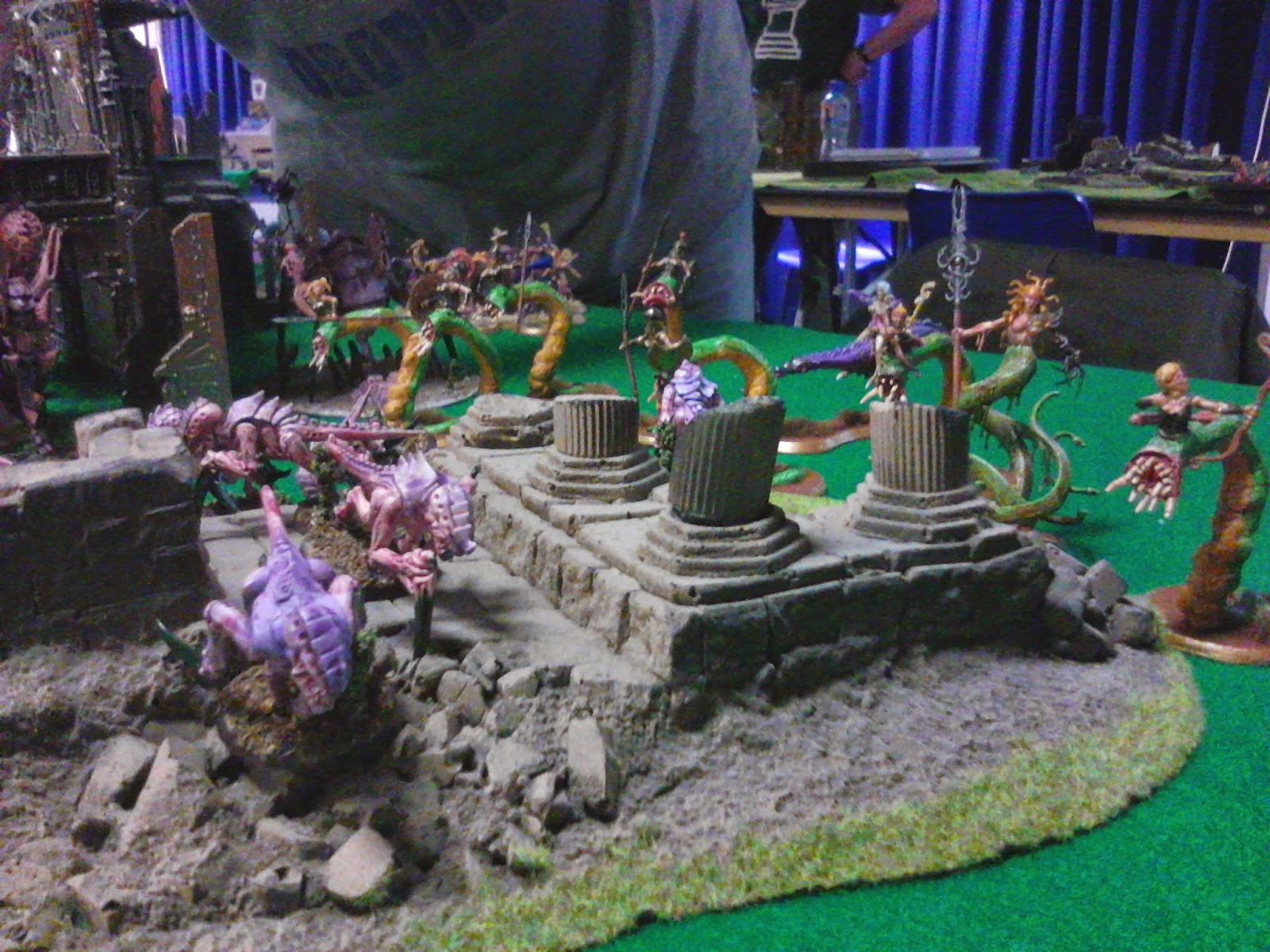 Conclusion, as this was only my second time using this type of nid list & with me not use to how tournaments score things & been a 7th ed newB & all there was things I could have done differently more so in my firstbut the hive mind evolves & moves on.
Some friend of mine (yes I do have some) have told me I self comp & yes I have for a long time & there are times that I will again but going to tournaments is not going to be one of them. 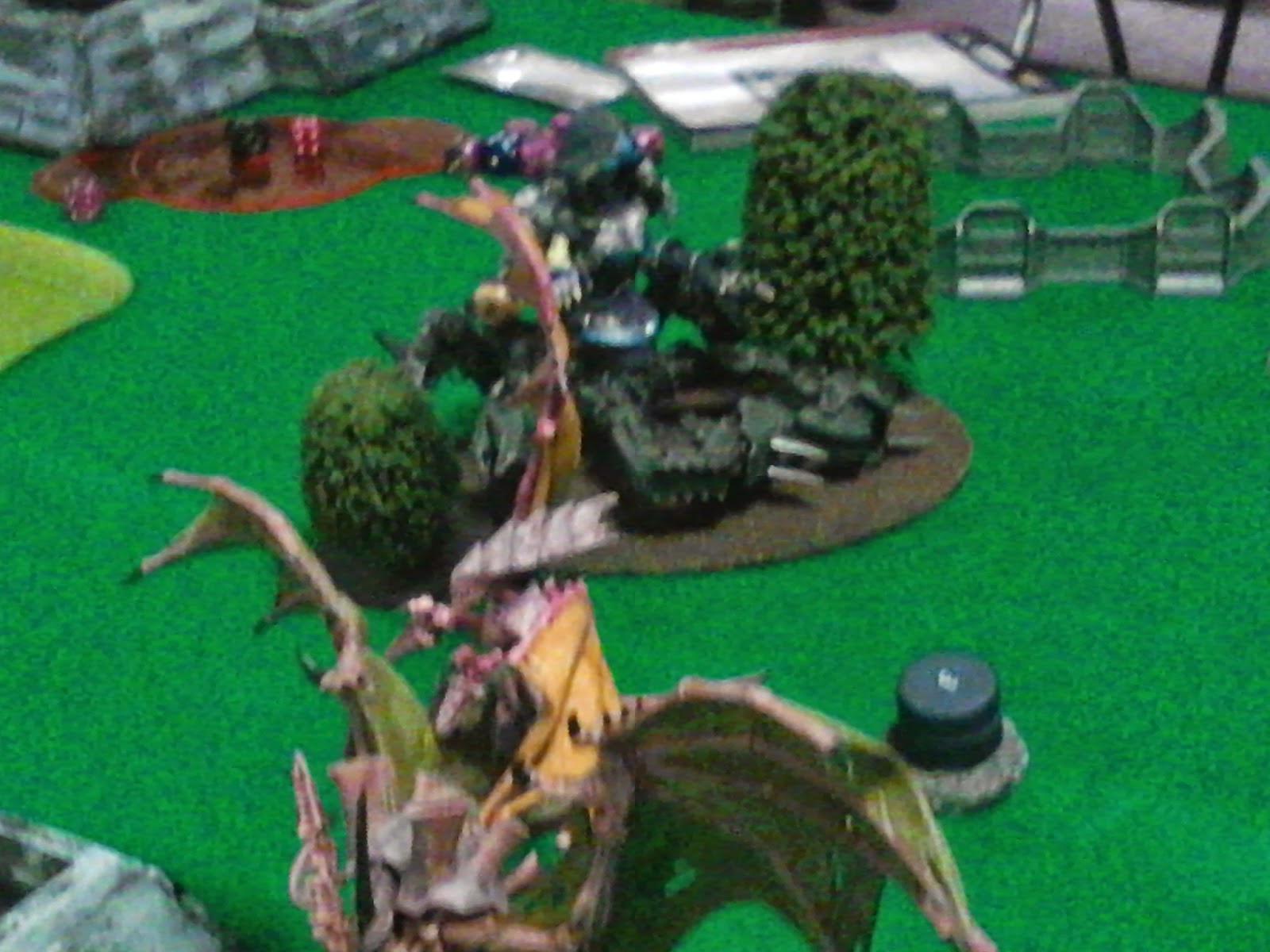 Over all I really happy with how the day went & I think I've found what is for me a sweet way of taking part in tournaments in just playing on the first day, why is this ? well there are 2 reasons 1 I find it takes a lot out of me playing at that leave for 9 or so hours & 2 as I'm only ever playing for one day I never have to think about trying to win it so I can be a bit more relaxed about the whole thing. 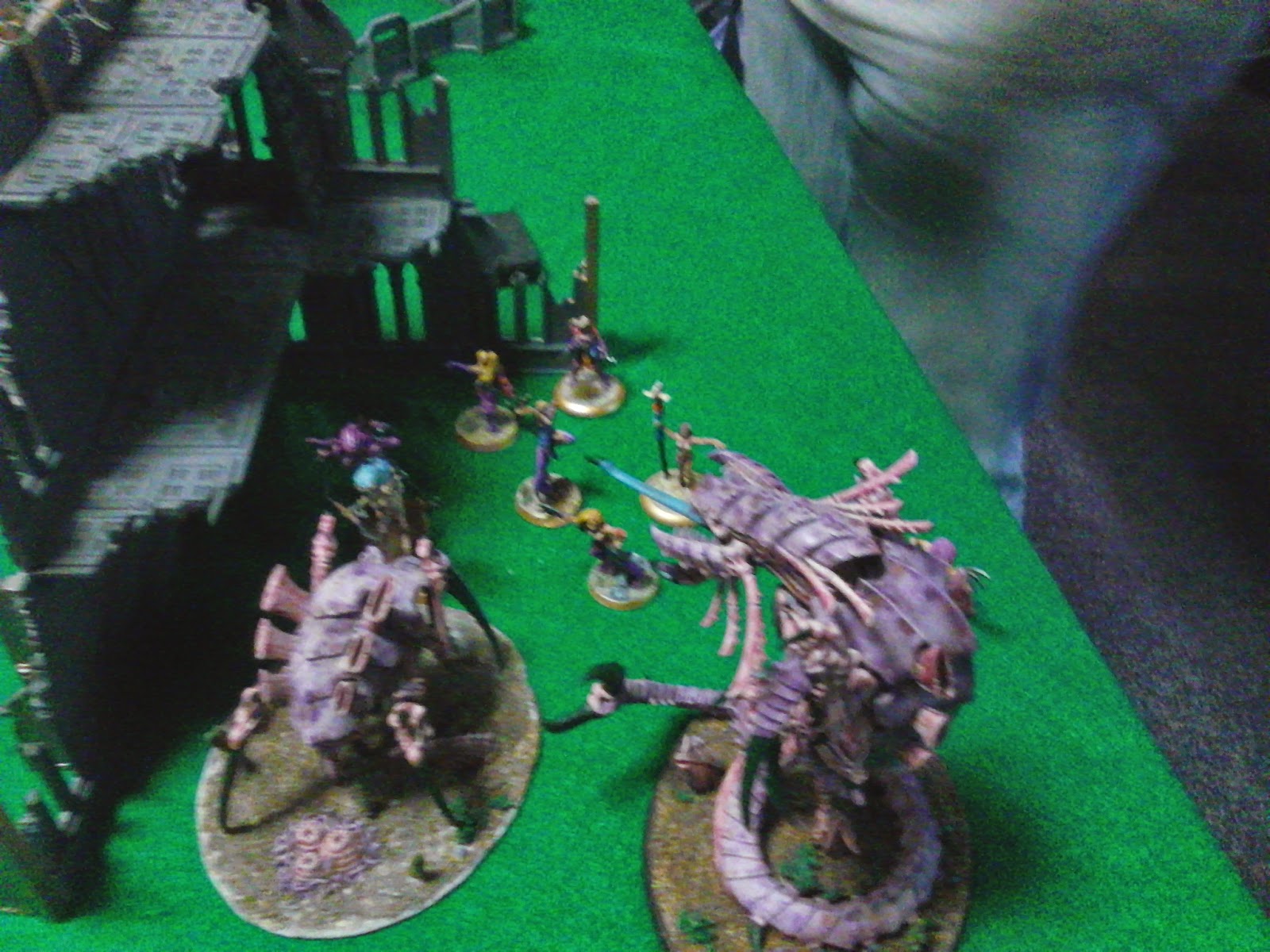 As I post this day 2 is taking place so I can't say who's won what, I'll post it in my next blog which will be about that little unpainted guy in the picture below & no GW didn't start making plastic lictors but I did, so until then my thanks to Alex, Jack & Alan for 3 fun games, to Craig for running it & as always my thanks for dropping in. 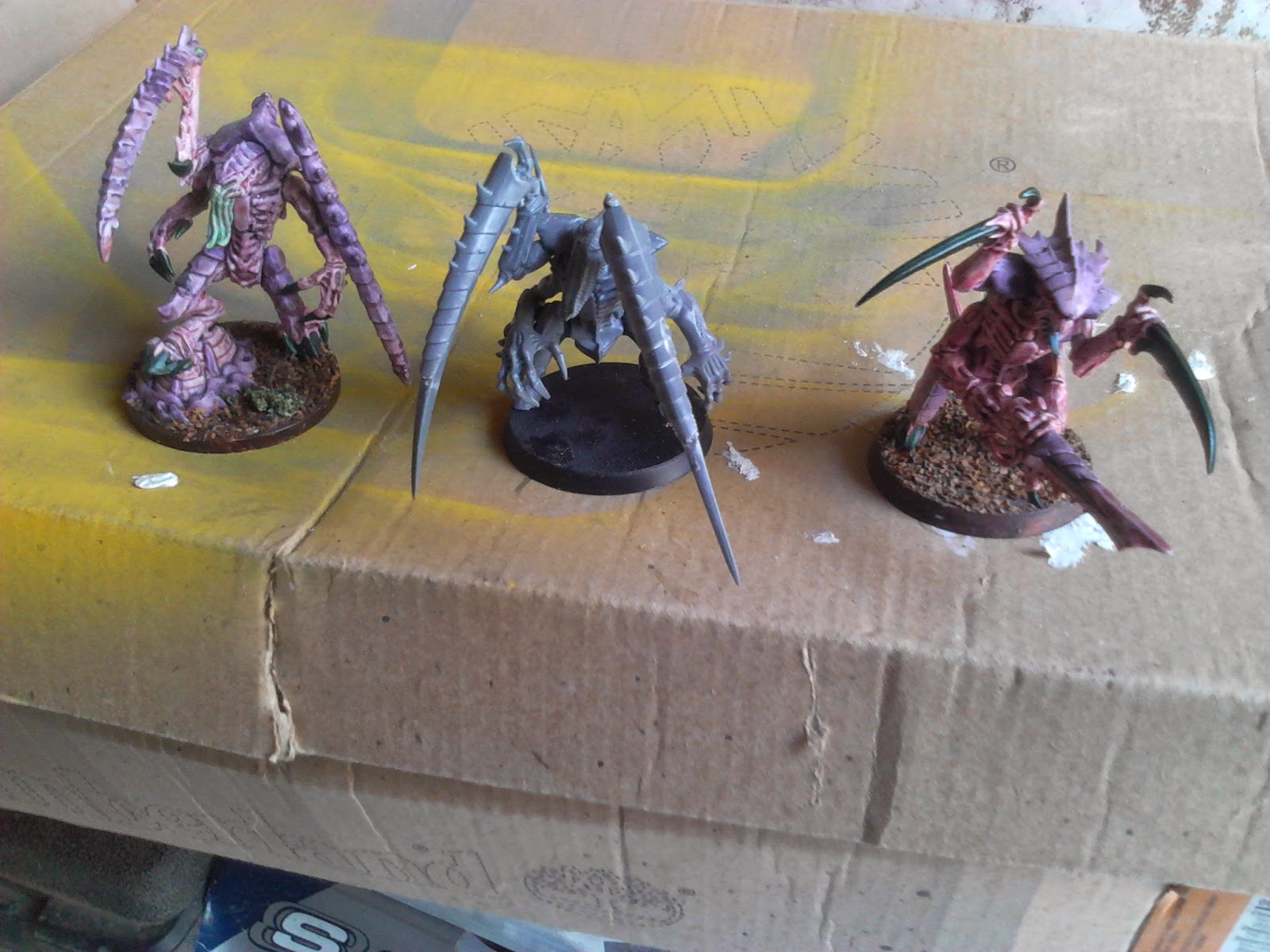