With 7th ed & the TOC's you really do need to have objective markers not only that but you now need numbered one's so I set about making some up as gone are the days of just pulling some change out of your pocket. 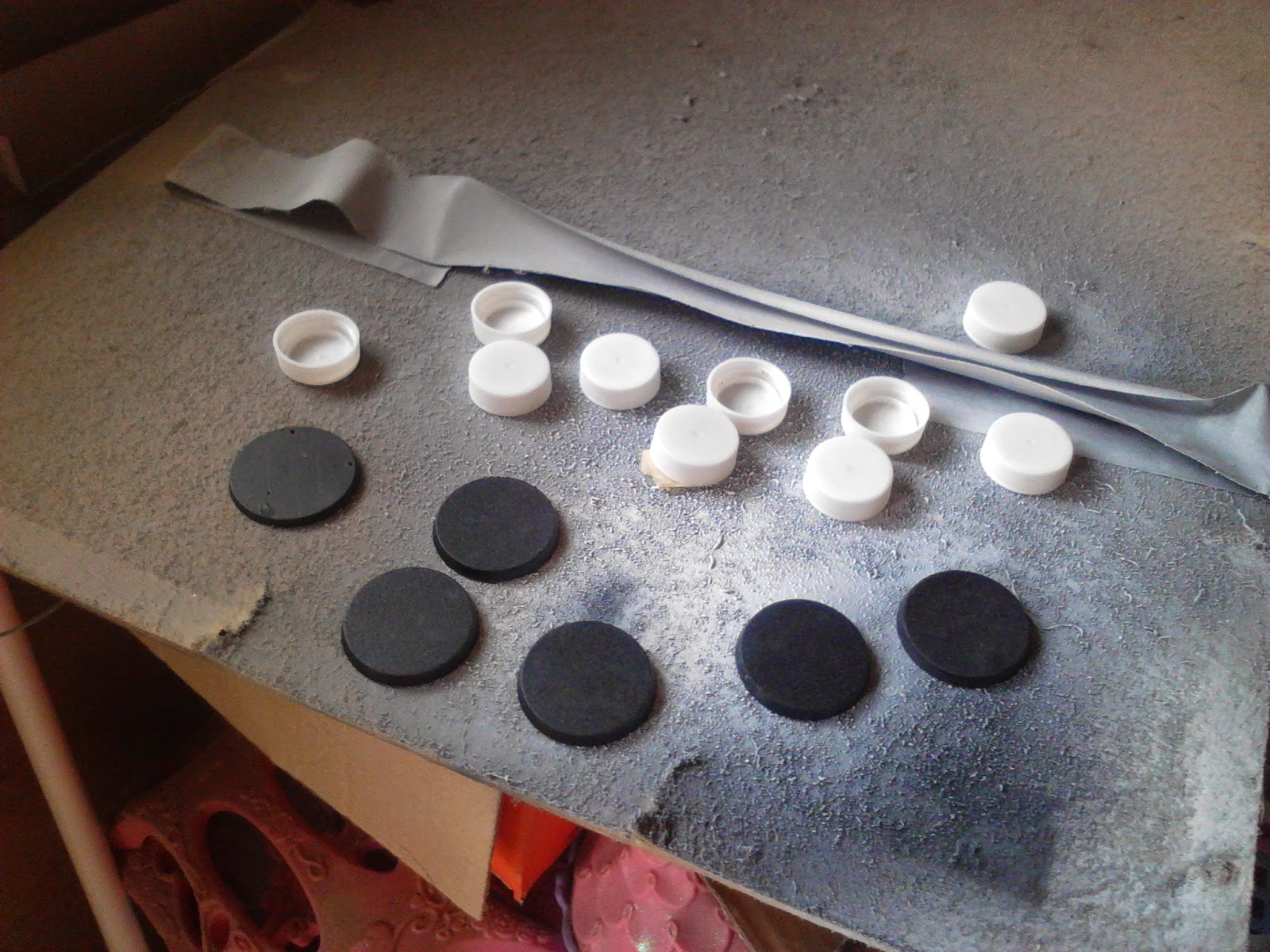 One of the funniest stories I ever heard about a game of 40k was based a round an objective marker, it would have been back in 5th ed & two lads Ger & Phil where having a game in the club, as like most of us they no markers & just grab a few things one of which happened to be a tree which Phil then placed in a woods. 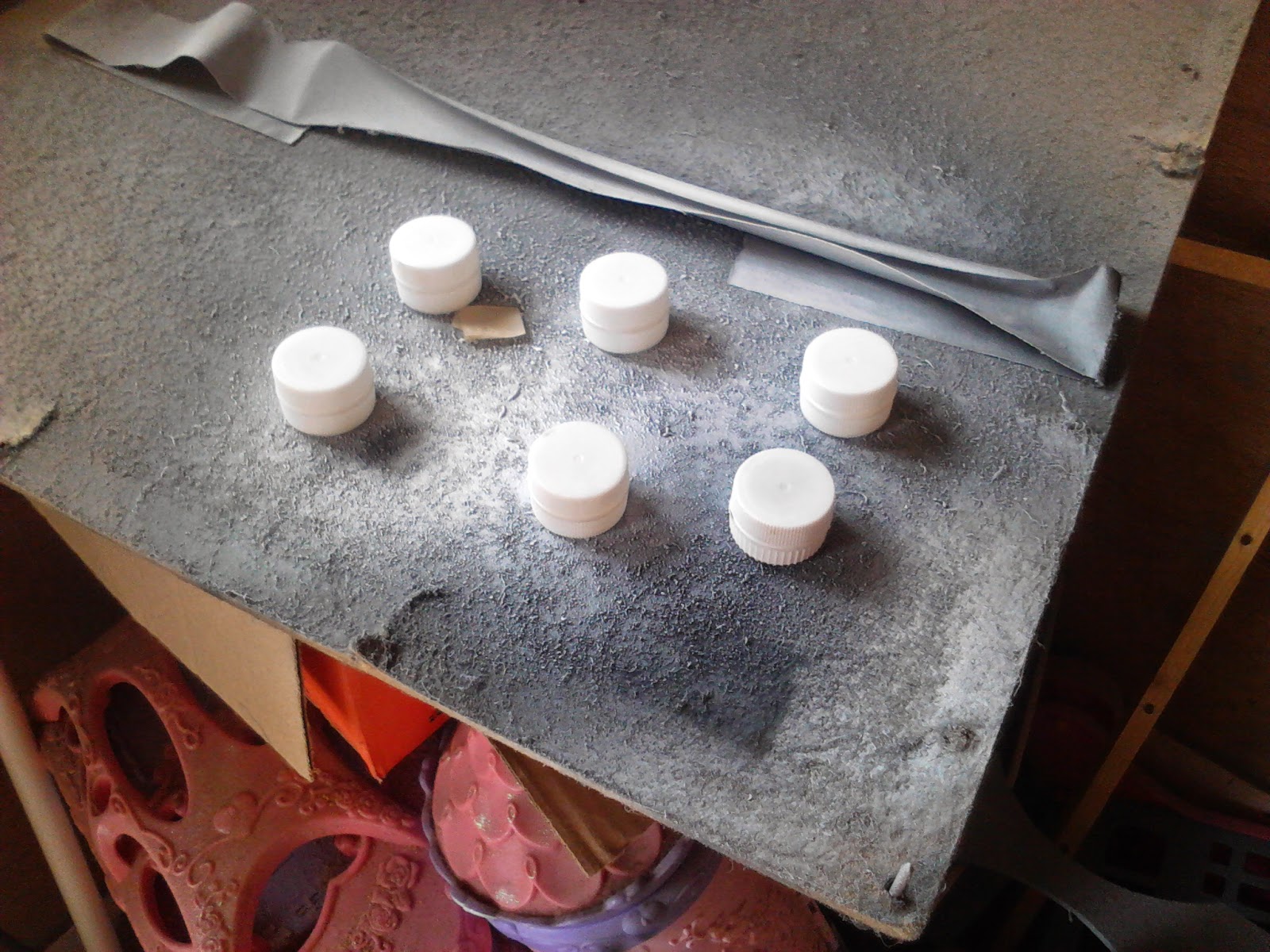 Ger got a rhino with some guys inside & sat it beside this tree until come the last turn, Ger forgets that the tree is an objective & drives off losing the game by doing so lol.
Ger a short time later picked up the markers with the little flags in them, so funny & all as that little tail was hopefully these markers will make sure I never suffer the same faith. 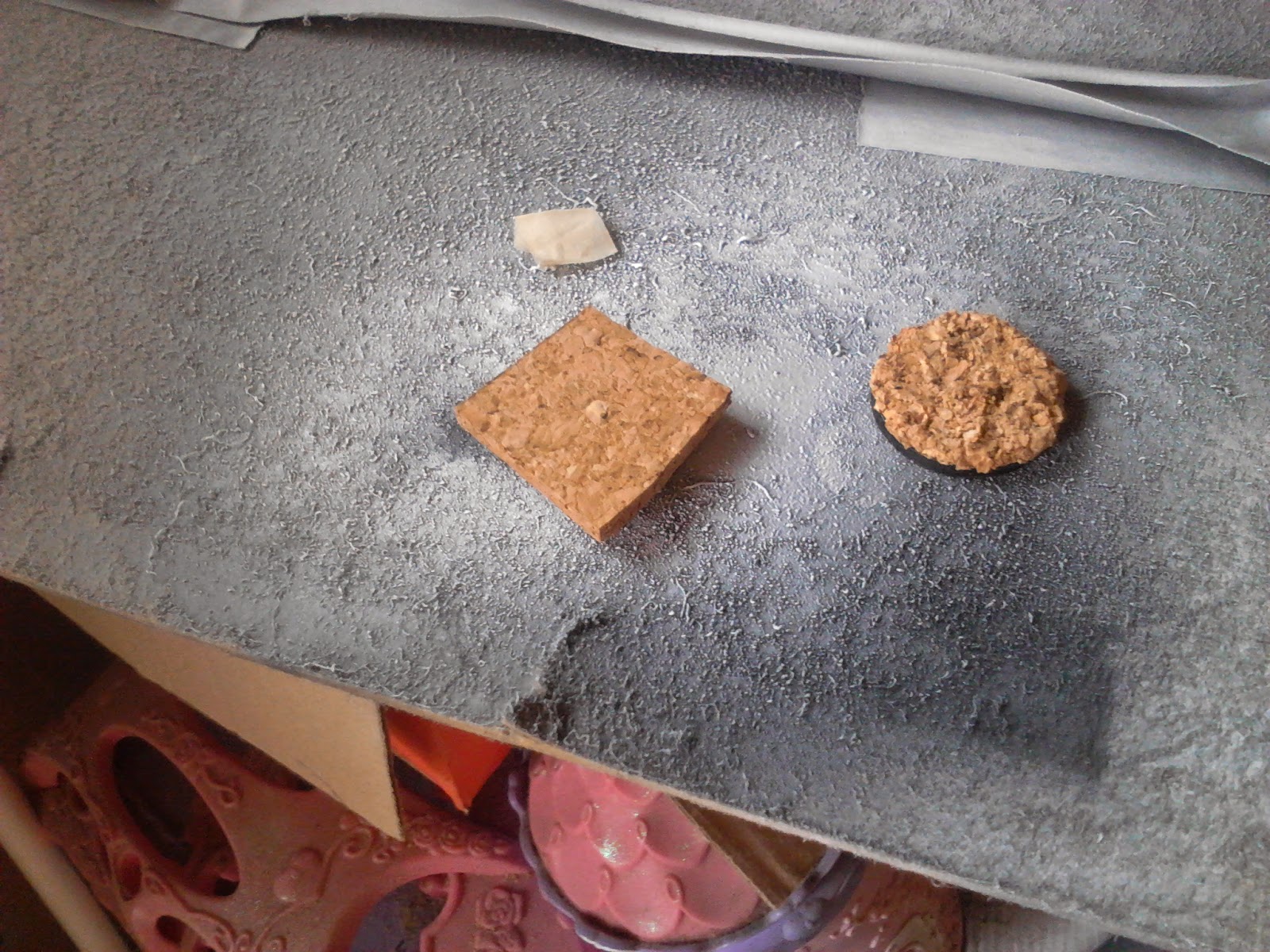 Now an easy way to do this things is to grab a few poker chips spray them & stick numbers on them & these are over all fine, but in a game that seems to take a long time to play the last thing you need is to be spending time looking for the markers & trying to look at them to see which one is which, also when there flat player can move things like tanks on to them which can then lead to a player forgetting where it is. 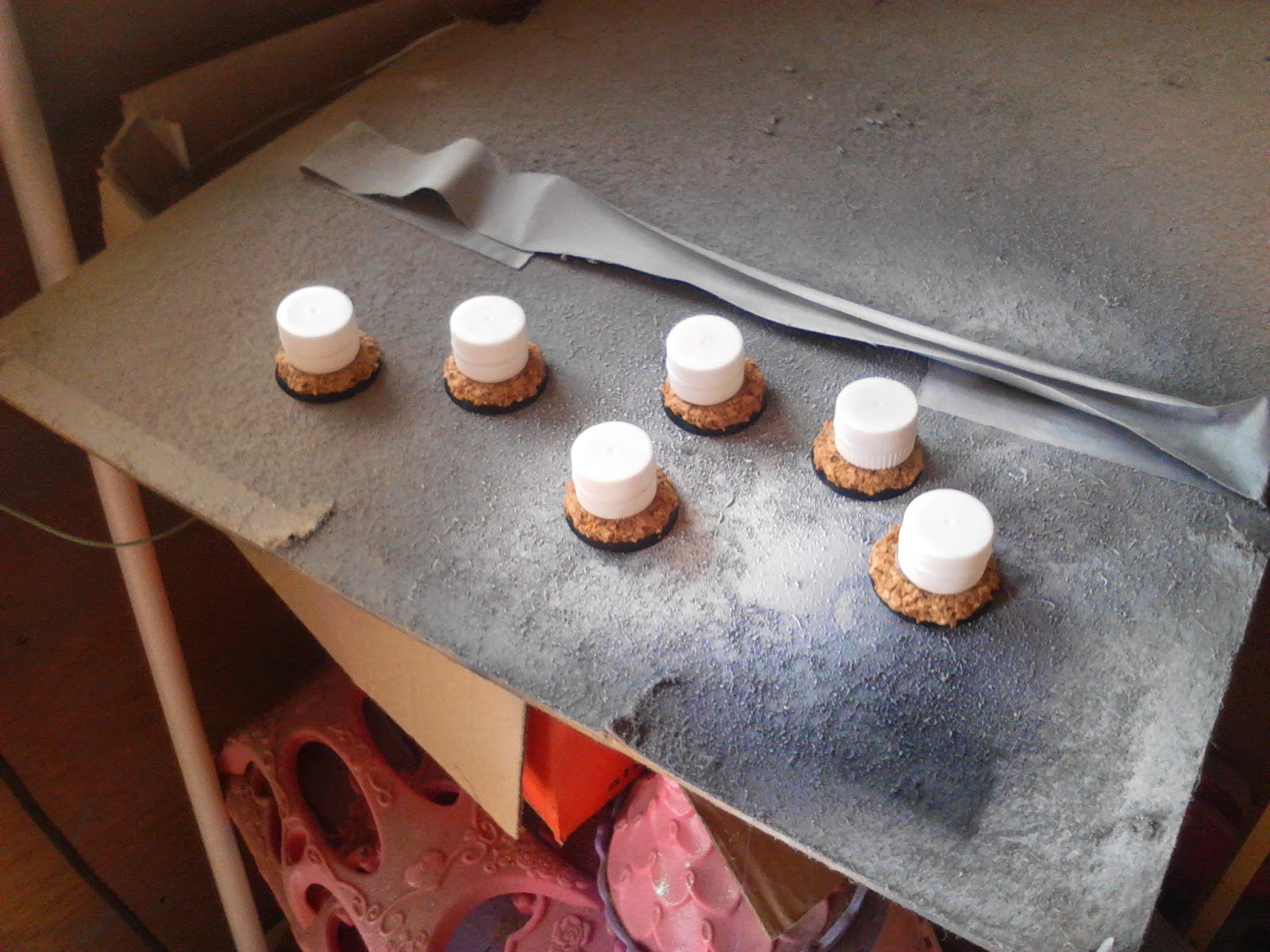 When I made these up I was just going to paint them all the same colour but then I had a idea if I made them all different colours after a while I learn which one is which just by the colour which should in the long run help cut out on the time players spend to see which one is which. 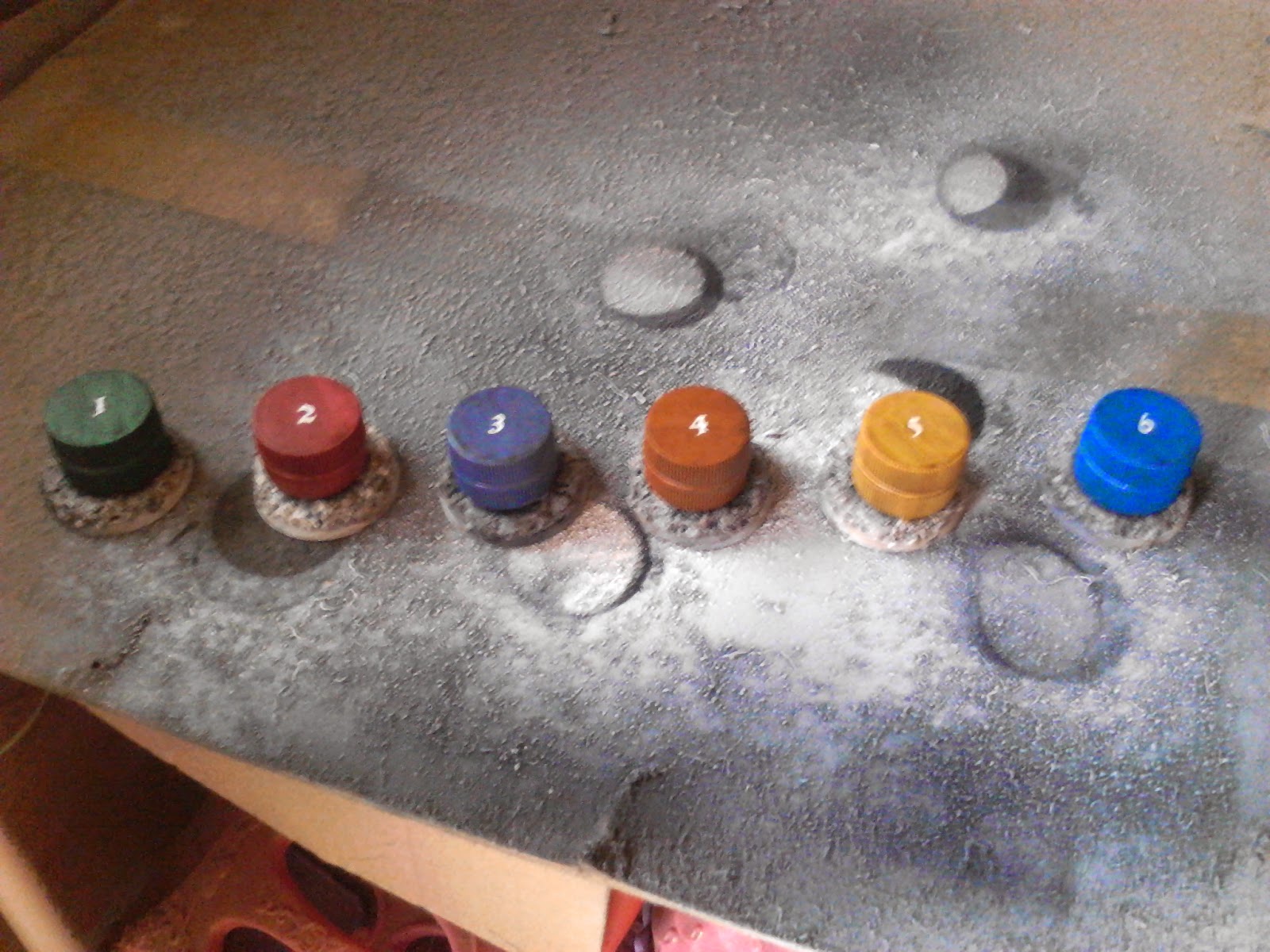 Finished just in time for my game with Jamie. 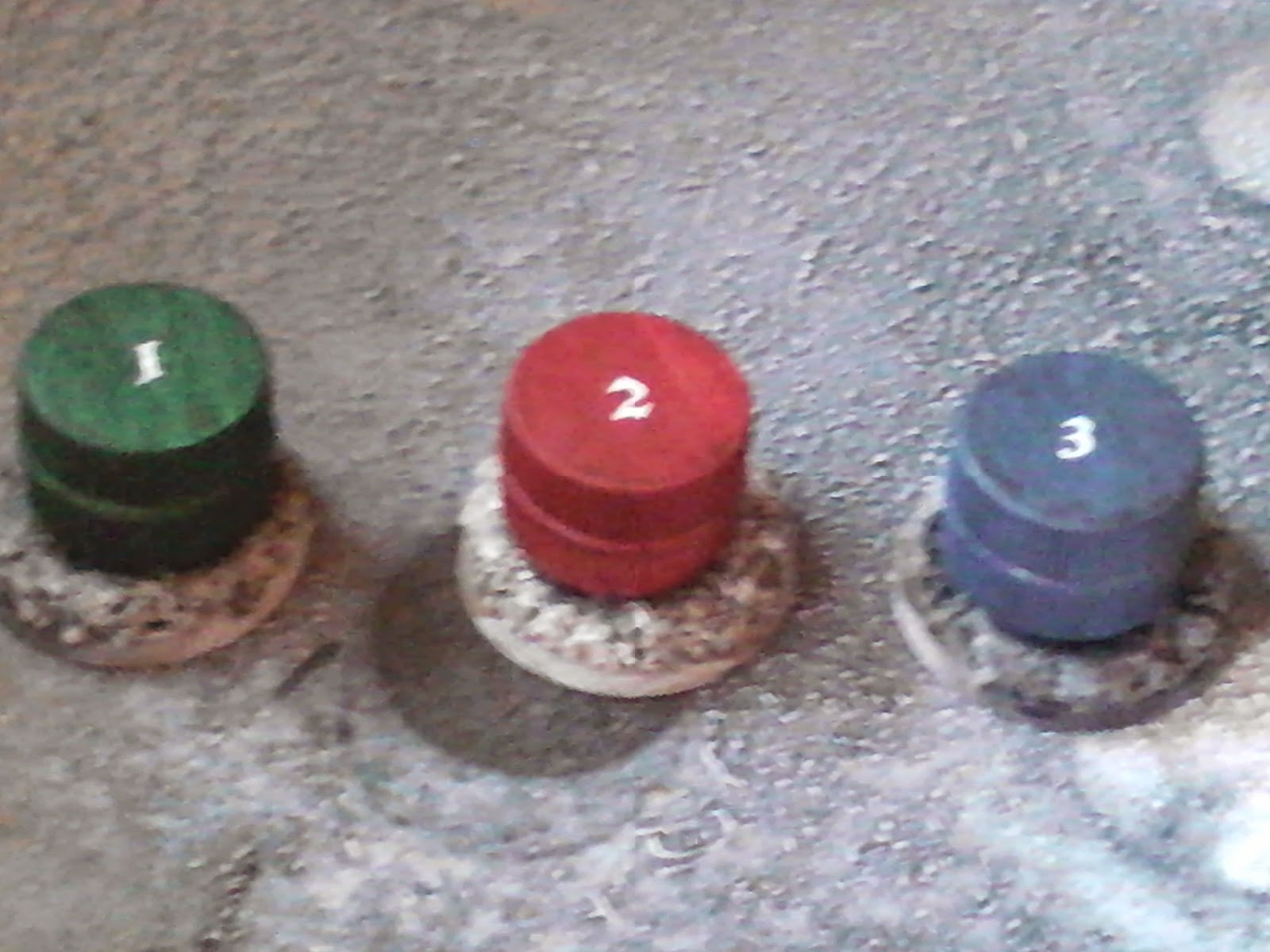 I didn't do a how to here as the pictures show you all you'd need to know if you want to fallow what I've done, these really are one of the easiest thing you could ever hope to make. 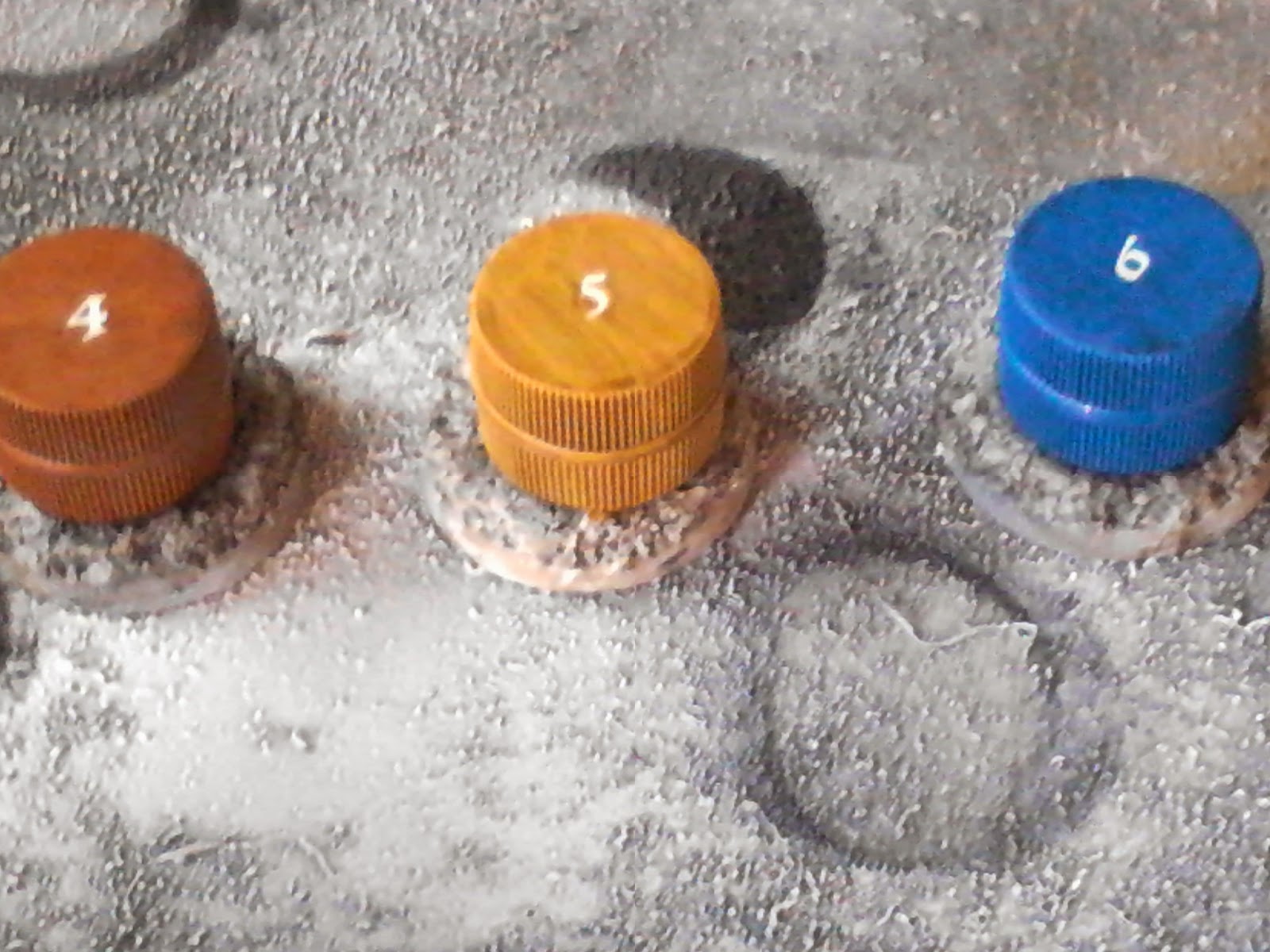 The second part of this post is just a little update on my sisters as anyone who drops in to the blog from time to time will know I've started using my sisters of battle to encourage me to work on them,
luckily enough for me I've enough of them that I can work away on a unit behind the scene's while still using the same unit in the army. 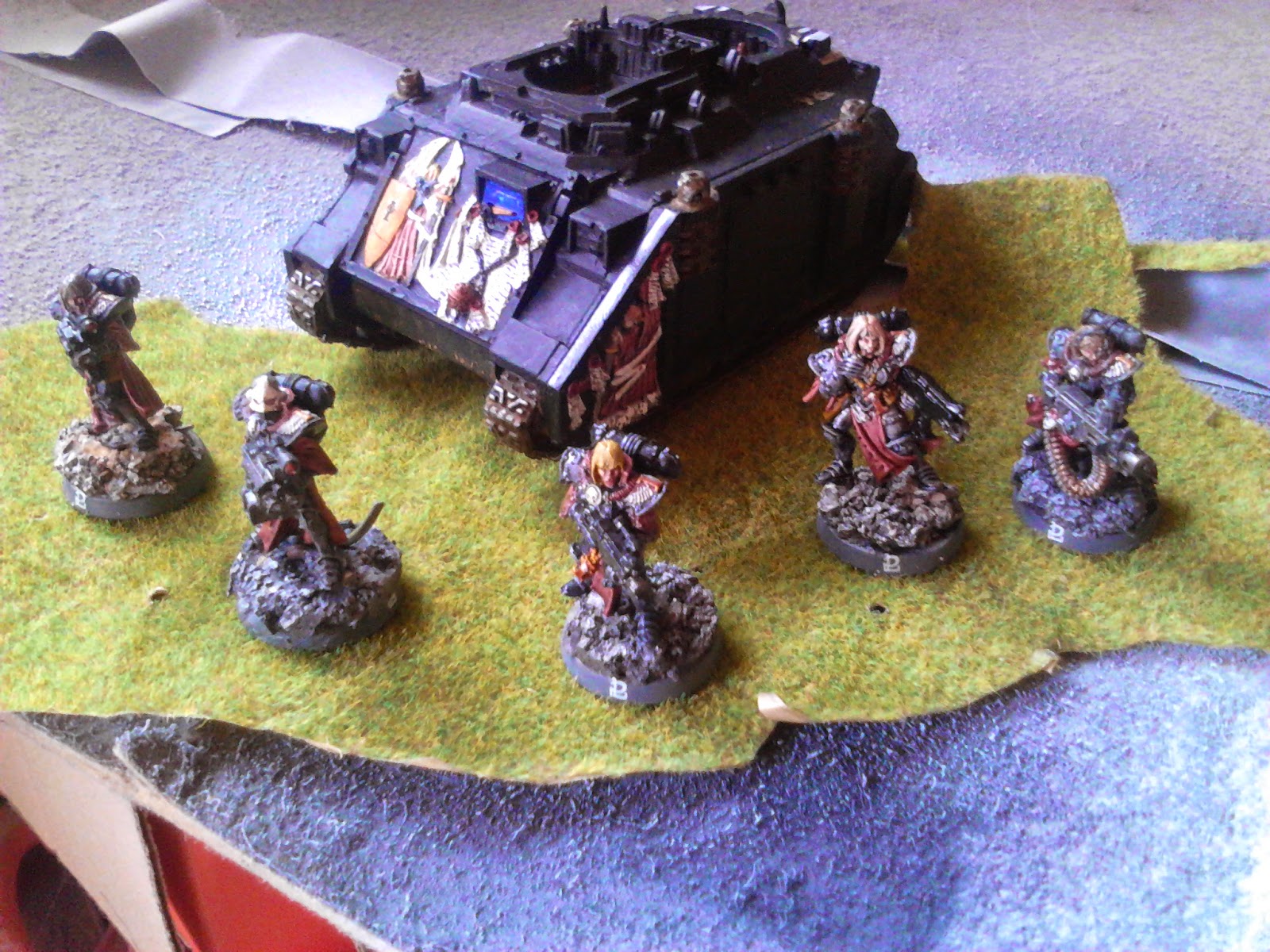 Then when I've got the unit ready I'll just swap it a round for the one in the army, this way of doing things should make painting up the army a lot easier I hope, these 5 sisters is one of my troop squads & will go into the army for my game with Jamie. 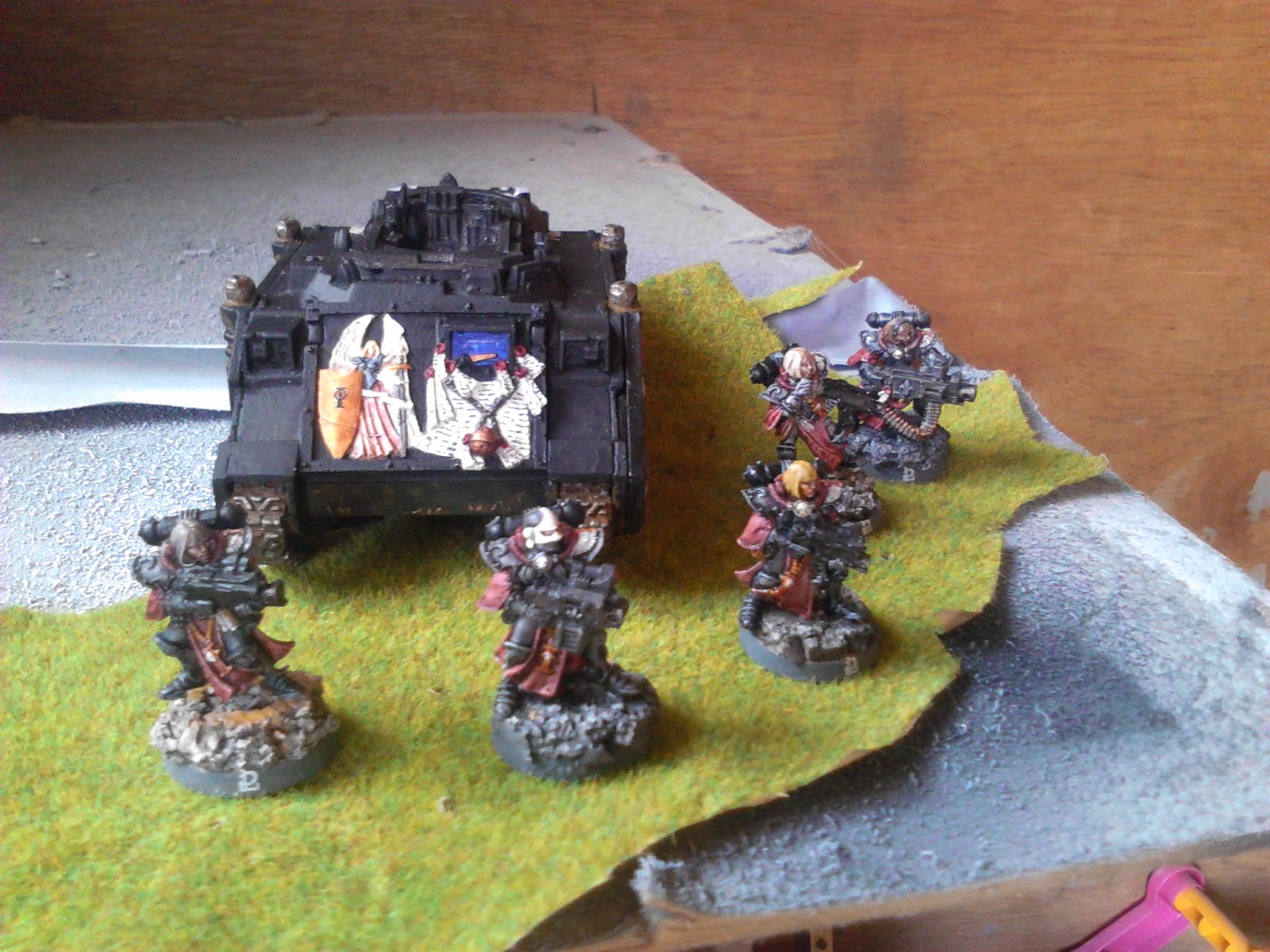 I put numbers on the bases as a way of doing squad making that way if I want to take certain models in or out of  squads it's not a big job to just change the number, in the back round is the exorcist I'm working on which like the squad once finished will swap out for one of the two that's in the army. 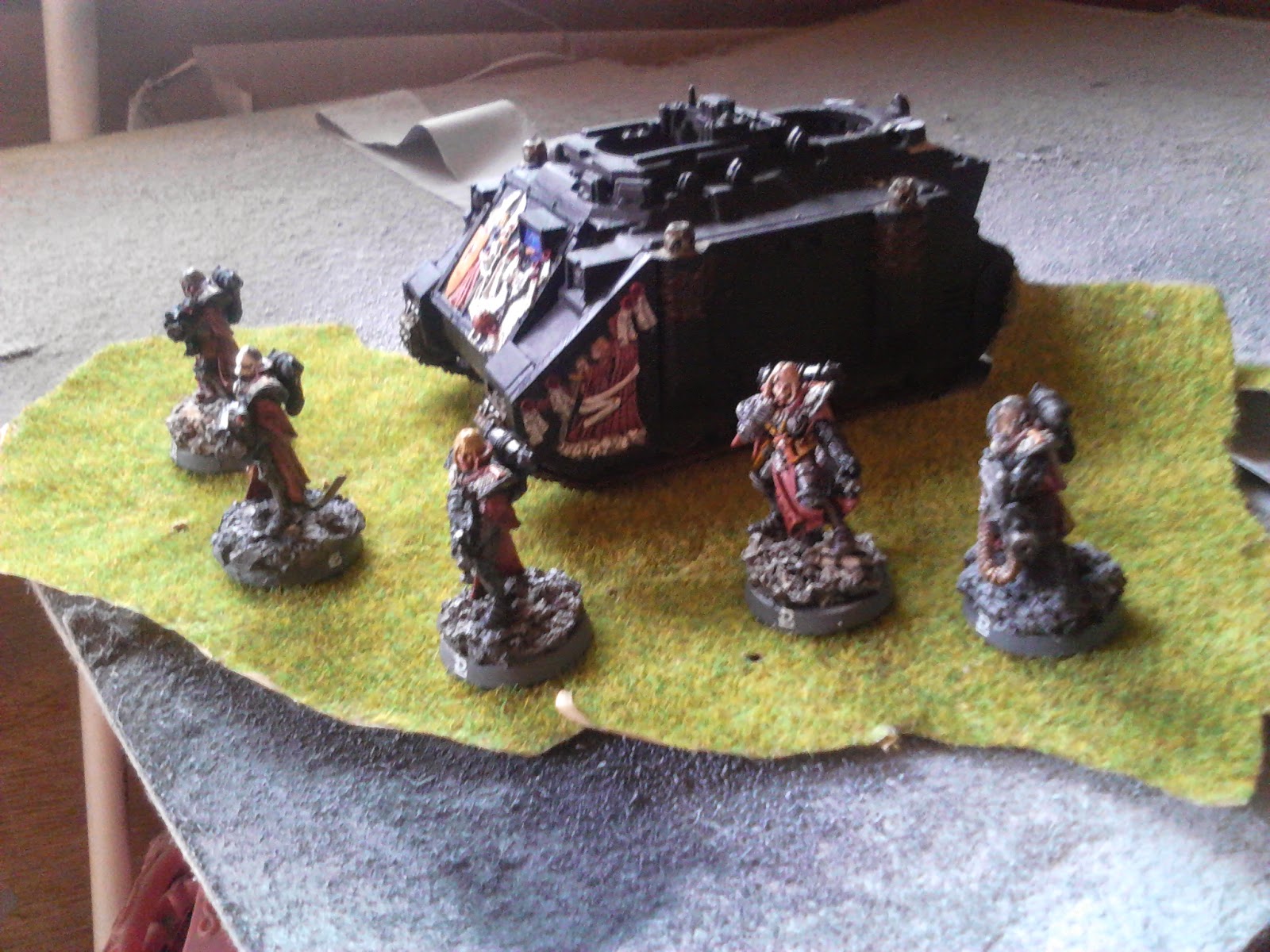 Anyway thanks for dropping in I hope it was worth your while & that you'll call back soon.
Posted by Frank O Donnell at 7/10/2014