Captain Draymus had received his orders the Adeptus Mechanicus Biologis had discovered something of interesting in one of the ruins & he & his men where to buy them time to investigate it.
The tyranids had been advancing over the planet consuming all in their path as is their way, but as Draymus looked a round him at the men of the ultramarines 6th company he felt confident that would be able to buy the time needed as each member was a veteran of the Tyranid wars,but as usual the price of success would be high. 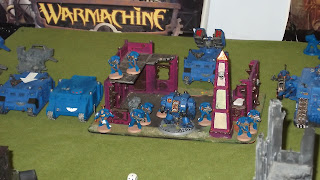 Taking up a defensive position just sightly back from the edge of the ruined city so as to set up god fire lines for the nids to advance into, while at the same time it should help slow the tyranids charge.To the Ultramarines these tactics where second nature & Draymus knew he could depend on his man to hold their fire until the optimal moment. 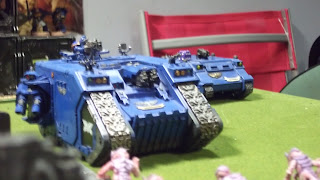 As the marines started to open up with their bolters & heavy weapons the landraider with a squad of assault terminators started to move up on their left flank, while on the right flank the landspeeders squadren leaped forward poring out death from their heavy bolters & assualt cannons. 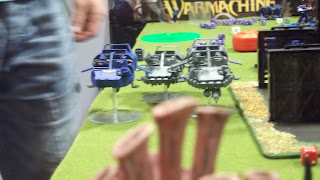 While in the centre Draymus move forward on his bike supported by a dreadnought & two combat squads in rhino's, to the sound of missile's streaking by overhead from the whirlwind that had taken up a position just behind the marines line. 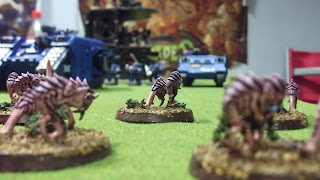 First into the slaughter where the terminators rushing from the landraider to smash into a massive brood of
hormagaunts, as the landraider open up on a tervigon that was driving the smaller nids forward to the hart of the battle.
At the same time the marines back line was coming under fire with spore mines falling on them that where been flung high over over the battlefield by a brood of biovore who had ducked out of sight into a ruin. 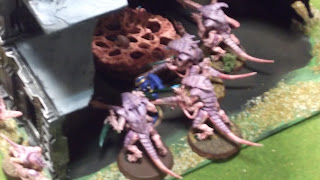 The marines back line on the right flank was pick by the hive mind as an ideal place to open up a new point of attack, with a mycetic spore crashing down onto the ground floor to deliver  a brood of warriors who open fire upon the tactical squad already housed there.
All across the breath of the battlefield the Ultramarines where taking lose, the terminators where swamped in a sea of bodies on the left flank, on the right flank the  speeder squadron had come under attack from a tyrannofex who their bullets seem to just bounce harmless off. 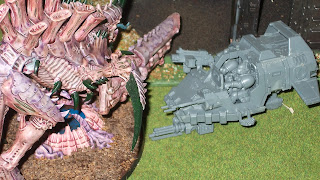 Wrecking one with a volley from his rupture cannon the hulking brute thunder into the squadron sending one spinning through the air with a swipe from one of its massive limbs & while the marines where making the tyranids pay dearly for every inch or land they gained, more pored over the dead. 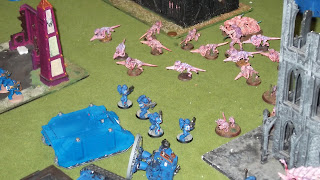 In the centre a tyrant backed up by a brood of hive guard pumped shot after shot into the dreadnought bring him to a halt, seen brother dreadnought Icurus fall filled  Draymus with righteous fury speeding he rammed his bike into the tyrant raining down blow upon blow from his power axe  on the beast. 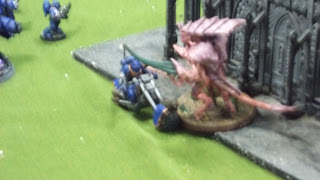 On the left flank the landraider finely brought the tervigon to its knees only to find it was the only remaining unit in that part of the battlefield, after over running the terminators the hormagaunt brood burst out of a ruin  to find themselves on the end of a flamer & rapid firing bolters.
With the last of the speeders out of the way the tyrainnofex was now closing in on the right side of the back line to try to create a pincher attack together with the warriors & devilgants that now had control of the left flank. 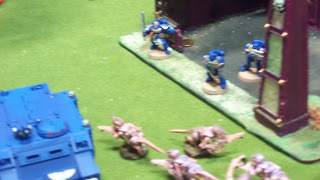 Before the tyrent had even hit the ground realising the danger Draymus  was already spinning his bike around to launch an attack at the tyrannfax before the lose could be closed trapping what was left of his men inside.
This brave act was to save the lives of countless marines when word came trough that the biologis exploritas team had completed its research & that the Ultramarines could know disengage from the enemy. 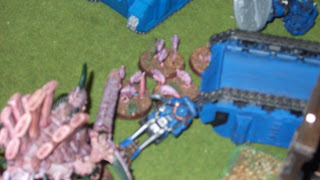 The Ultramarines had indeed paid a high price but had completed their objective to delay the tyranids, which to captain Draymus seemed to be all you could every do with the nids.
With the tyranids consuming all in their path Draymus knew from many other such battles it wouldn't be long before this planet was just another lifeless rock.
Posted by Frank O Donnell at 10/26/2012