The guy's at Pulp Alley have just released a solo pack pack for playing Pulp Alley well solo, now before I go on the best way to play any game is with another person ( unless you've a very smart dog) not with a computer or by yourself. 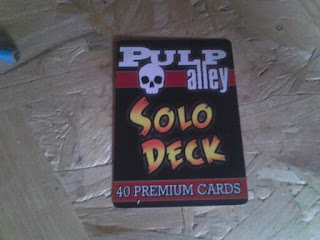 That been said I picked up a pack along with the one free page solo play rules & gave it a go (you also need the rulebook), so how did I find it I hear you ask ? the short answer excellent (so if you want to stop reading at this point you can) the long answer is what this post is about. 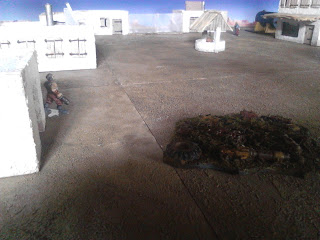 The game I played was the Trail of clues from the PA rulebook & the only thing I changed was how you place the next plot point after you've solved one, I do this by rolling a scatter dice for the diction as I find if you just place it the game can become bogged down in the two corners . 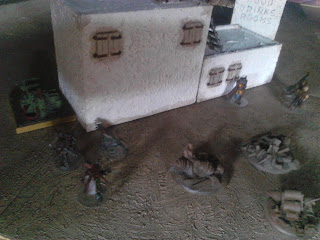 So back on track, the thing that makes PA different from a lot of games are the cards, so if you like the cards are the stars of the game & apart from bad dice roll's they are where much of the fun comes from, this is carried through into solo play in a very clever way. 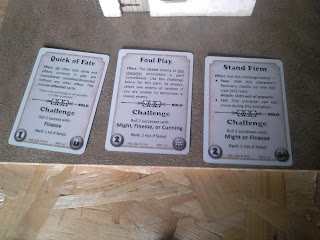 How the game works is simple & not a lot different from a normal game of PA, instead of each player having a hand of cards you play a card on the first 3 character's activated, so at the start of each turn you decide do you want to activate your league or the other league know as the bots, now as you can see from the 3 cards above (click on picture if you need it bigger) they don't always effect the character their played on, nor are they always bad. 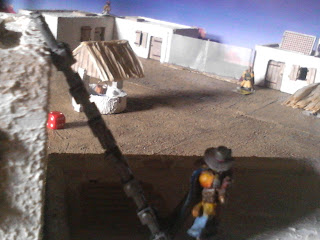 Who would you pick ? I'll explain about how you pick as it's smart, you don't just pick which team goes first & then just pick who you want, when you pick the team that's going first you then pick the first character nearest to an enemy character to activate, so depending on what happens the 3 closest at the start of the turn might not be the 3 to get activated. 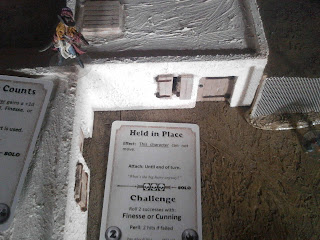 With all perils now been random perils it mean that every time you take a risk there is always going to be a challenge, look at the picture above, the character is about to jump down from the roof  so a random perils which mean's the top card is drawn from the deck & the challenge must be pasted, in a normal game of PA it would be down to the other player to decide if he wants to play a card from his hand, which he might not want to or might even be out of cards. 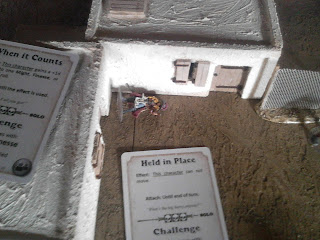 As you can see it didn't end well, plot point's have also become harder as your now always going to face a challenge before you can try one, that straight away makes trying a plot point with any one other then a leader or sidekick  very dangerous indeed as in most cases he'll only have a 50/50 of passing it & in a lot of case's he won't be able to pass it at all. 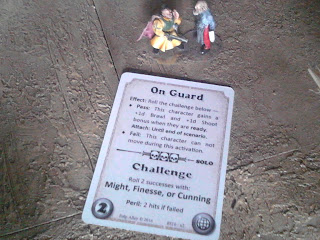 The guy in the picture above reach's the plot point & faces a challenge, as you can see it need's two on any of the 3 to pass it, most allies or follow's would auto fail as they would a lot of the time only have 1D in the those abilities. 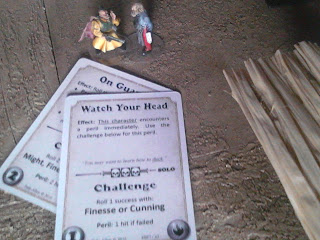 Luckily he's a leader passes & tries for the plot point, so how did you do Frank did you win ? tbh I was lucky to get a draw with both sides having the minor plot points & me only having my leader left & with the other leader ready to try for the major plot & the game about to go to turn 7 the card that removes all other card effect from play was drawn,so saving my butt. 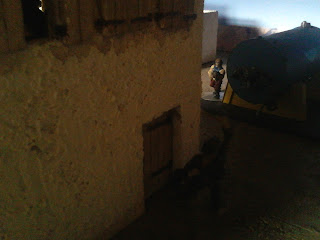 Now a little confession here, the picture's your seen are from what was my first try at solo but after turn 3 I realised that I'd gotten a few things wrong so I ripped it up & started again this time just paying attention to the game & not trying to get pictures. 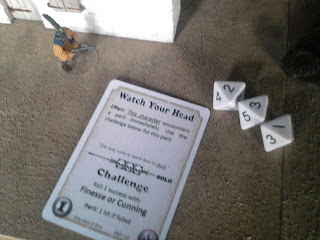 Seems even when I not playing anyone I still can't roll dice lol, so in conclusion my over all take on PA solo is that it work's very well & seamlessly & is very enjoyable, for someone like myself it will be very useful in moving the Tircol story along, for anyone who GM's games of PA it will be a great way of trying out leagues to see how balanced they are, or even you've nothing better to do on a cold winter's night & feel like some pulp fun the solo game's a great way to go. 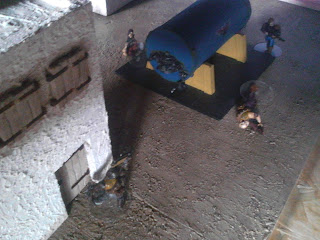 Well that's it for this post, my thank's to Dave & Mila for coming up with yet another way to have PA fun, my thanks to myself for a fun game & as always my thanks to you for dropping in & if you care to leave a comment it would be most welcome.