Christmas is always a good time for getting in a full days gaming as lots of people are on holidays, so this year was going to be no different, but from a 40k point of view things this year are a lot different. 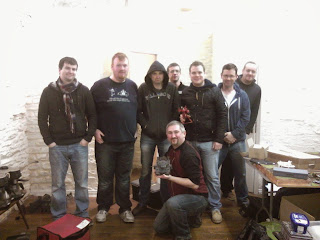 For those not in the know the TLC & the DGG are 2 gaming clubs based about 30 miles apart from one another & this was third such gaming day, so for this one I came up with the idea of doing a crossed doubles day to make feel more like an event then a tournament. 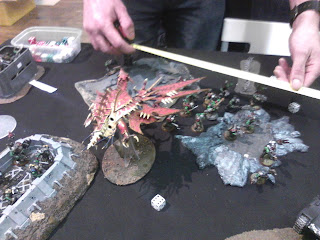 So the idea was that we'd have teams made up with a player from each club, with each player having an army of 1K points & play 3 games over the day. 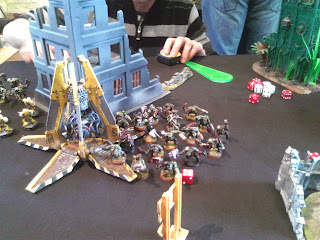 In the perfect world we'd have the same amount of players from each club but the best lay ed plans & all of that kind of thing, so what we did end up with was 3 from the DGG & 6 from the TLC giving us 9 players which meant yours truly didn't get to play with his toys. 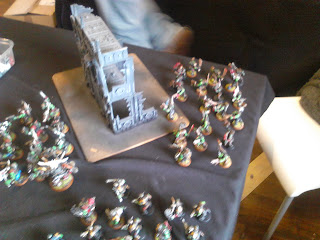 On the plus side we'd 4 teams which meant that each team would get to play each other which is cool as all the players get to interact with each other on the table, so the teams we had where Lenny DGG with Johno TLC, Darra DGG with Erik TLC, Lloyd TLC with Ross TLC & Brian with Conner TLC. 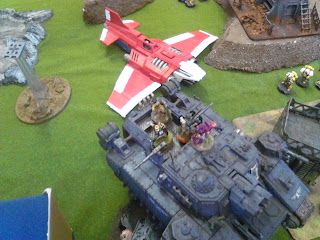 Now as I said above things in 40k are now a lot different & what I mean by that is the use of super heavies in 40k & with Darra bring an IG stormlord super heavy tank this was for all of us our first chance to see one of these big guys in a normal 40k game. 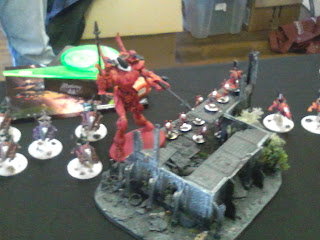 How did this work in the game I here you ask ? well the answer is quiet well to be honest, is it powerful ? yes is it more powerful then a lot of other stuff in the game ? no I don't honestly think so even if it did survive every game, but that's not to say it wasn't on the rack once or twice if Lenny could have roller a 5 or a 6 there would have been a nice big bang. 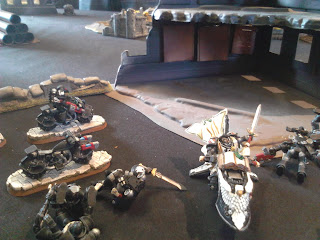 What is funny is the way these things change the way a game players out, as it became very much so as a good friend of mine use to always say in apoc games shoot the big thing, & as someone who loves models I can say in all honesty that I look forward to seen more big things on the gaming tables. 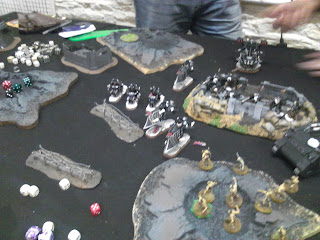 Even though I had to sit this one out I'd a lot of fun as did to the best of my knowledge that lads that took part which at the end of the day is what these things are all about, highlight of the day for me had to be when Lloyd turn to Conner & said are you shooting at something or are you just rolling dice for the fun of it ? isn't that what we all roll the dice for at the end of the day Lloyd lol. 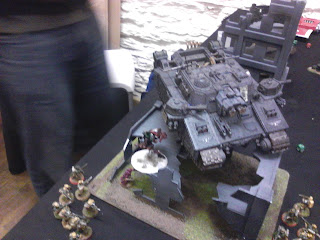 So I'll finish up by thanking all the players who took part, Ian for the use of the Hobby Shack ( if you find yourself in Wicklow town drop in & say hi)  & you for dropping in & I look forward to a BIG newyear in 40k.

Ps it turns out we where doing the damage on the super heavy wrong & Lenny should have indeed destroyed it, we'll know better next time.
Posted by Frank O Donnell at 12/29/2013