Reports from the Inquisition UI449

Lord Inquisitor what follows is a report from Salamander Captain Tu Klin.

When we reached the forward position of the exploration forces we found them to be in high moral despite the earlier setback.
Commissar Kozlov had chosen a good lie of land from which to start the search of the settlement, with some excellent places to
set up covering fire from. 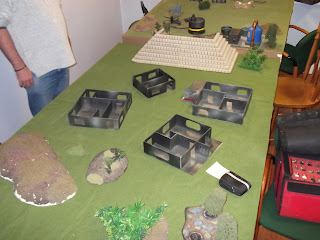 It was decided to send what remained of the Adepta Sororitas back to reinforce the landing site as the threat here seemed minimal & if thinks where to take a turn for the worse it would be important to have an escape point from which to get off the planet. 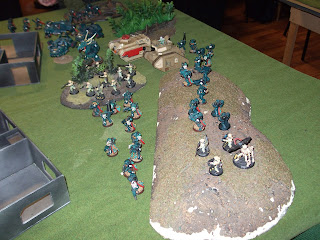 I gave orders for the 3 tactical squads to split into combat squads & start the search of the ruins of the settlement, working their way towards the large  structure at the opposite end. 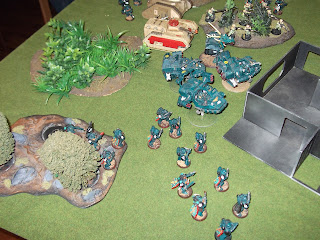 A small 3 man squad of ratlings had infiltrated a head 7 all their reports so far had been no sign of the enemy.
Just as the squads where setting out the skies started to darking with the first signs of a storm that was starting to form over the strange
structure & spread out towards us. 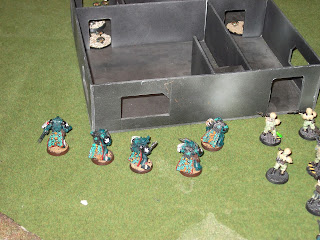 It seemed to be getting darker by the minute so much so that the guard's man where having trouble seen more then 10m ahead of them.
Next the whole place lit up as a massive strike of light smashed down to the ground splitting a near by tree in half, it was then that we saw them
swarming out of the structure thousand's upon thousand's of scarab's followed by canoptek spyders. 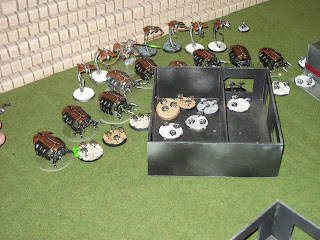 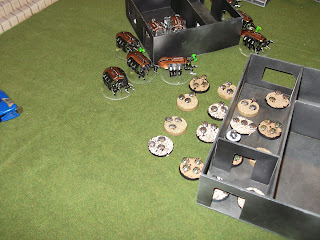 Also as if appearing out of tin air came canoptek wraith's while out of the sky the lightning started to flash down amongst us,killing one of the ratlings 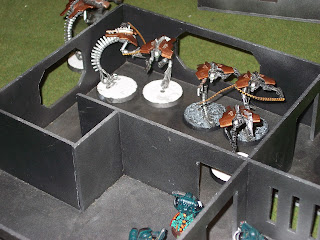 as they made their way back to us, a near by leman russ was was stuck so hard that the crew were violently thrown about inside & a battle brother from the devastator was burned to a crisp by another bolt his power armour of little use 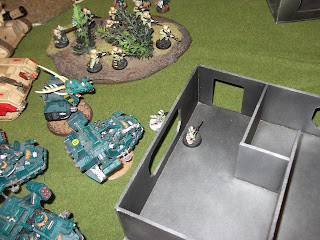 We opened fire but the storm was making it very hard to pick a target as it would switch from pitch black to blinding light in an instant quickly turning back dark, but despite this we where still killing countless scarabs so great was their number that it was all most impossible to miss,
The land speeders backed up by the heavy weapons of the devastator squad opened fire on a cluster of spyders felling one of them & blowing chunks off another. 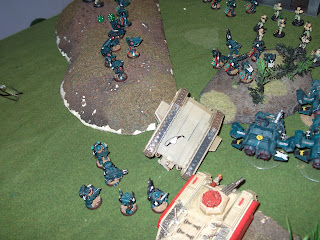 The lightning continued to rain down upon us totally wrecking a leman russ eradicator & killpng countless guard's men it was somehow controlled by the necron's.
Tactical squad Tu Ore who had gone to the aid of the ratling's moving into a position to give them cover fire, where the first to come into hand to hand contact  with the enemy when they were assaulted by some wriath's who were joined by a necron lord on a destroyer body. 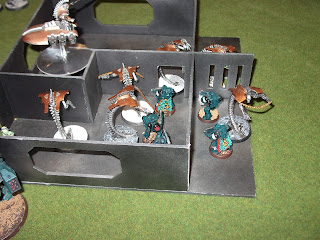 Sergeant Tu Ore put & his squad put up a fight above & beyond the call of duty making sure they bought enough time for the little one's. 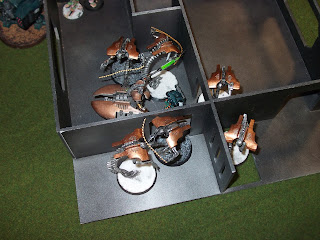 The forward squad fought bravely to a man but could not hold back the tied of scarab's that where washing over everything, while over on our left flank the necron lord & his court that hd being present at the earlier engagement appeared from nowhere cutting down four man of one of the combat squads. 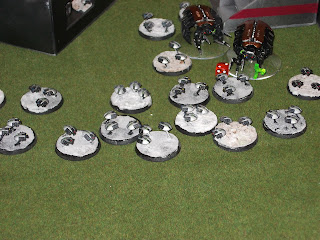 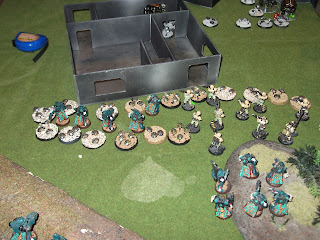 The necron's where right among us now with brother dreadnought Puff wading into the middle of them & incinerating scarab's whole sale with his heavy flamer, a chimera carrying Inquisitor  Afacan &  Lord Commissar Kozlov chuttled forward also opening up with their heavy flamer, all available guns targeted the the scarabs clearing our lines of them temporarily at less 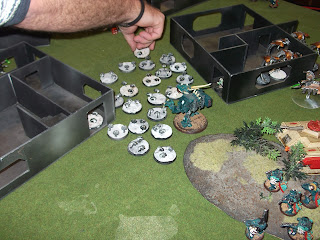 No sooner had we done this when the next wave hit covering our brave dreadnought & striping him of his sarcophagus in seconds, we were now under pressure all a long our lines with the storm that had plagued us with lightning now abated. 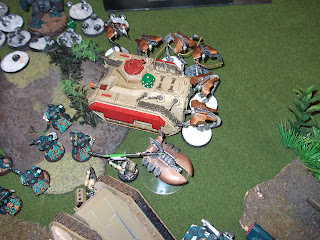 Wraith's drifted across the battlefield saliently to assault the command chimera  forcing the passengers to disembark into the heart of the madness, no sooner had they done this when a misplaced plasma blast landed in the middle of them killing one of the guardsmen. 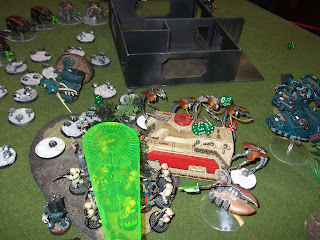 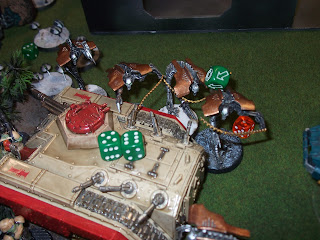 Slaughter on a unimaginable scale now took place with no quarter asked or given among the close in combat, to try to gain us some relief the last remaining in the ruins charged into the enemy's flank but to little effect & more good men just lost their life's. 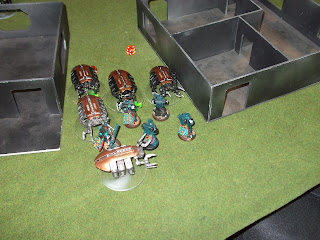 In a brief  rest-spite  I looked up to see the brave little ratling's getting thorn limb from limb by some spyders who had caught them just as they tried to exit a ruin, the wraiths & their lord got finished off from thecombined firepower of the speeder squad & what was left of the plasma squad, over on the hill the devastator squad got gunned down by the lord & his court. 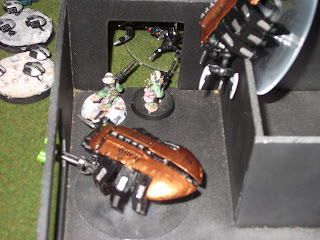 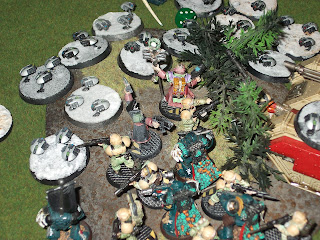 We where now been over run with the Inquisitor , Commissar & the ig squad with them losted beneath the see of scarab's & although we had killed many this day still they poured out from the structure up a head, as the two remaining sternguard brothers & myself stood ready to be swamped by the scarab's the strangest of things happened  as a hush came over all except for over to my left where the necron lord came under attack from something or someone it was impossible to say as it seemed to fade in & out of reality. 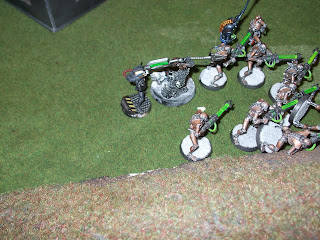 For what felt like an eternity they battle with the lord finally killing his assailant but I think I can honestly say I owe my live to that to what we later found out was a Culexus assassin,
for that seemed to single the end of the battle with the nercon's withdrawing back into their strange structure. 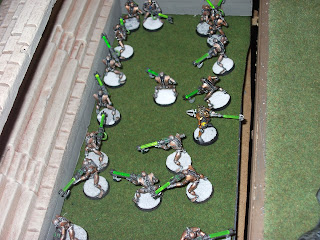 I sand you this report from on-board the Devine Light where a long with Inquisitor Price I'm recovering from my wounds, It is also the belief of Inquisitor Price & myself that UI449 should now  be classified  as a  tombworld & that a embargo beset in place around it to ensure that nothing enter's or leaves the planet until the High Lords of Terra decide if it worth making a full scale invasion to take the planet.

My thanks to John for what was an electrifying game in more ways then one.
Sorry about the changes in the text as when I'm viewing it it's fine then when publish it it goes funny & as I'm useless with computers I've know idea how to fix it so any help on that would welcome.
Posted by Frank O Donnell at 2/01/2013