Pull over a chair

Ah there you are, please pull over a chair & get comfortable, I've wanted to do this post for awhile so for better or worse here it is. 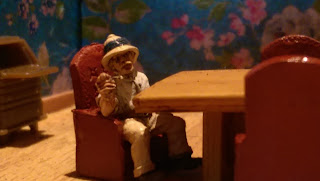 Those of you that come to my blog regularly might have noticed that over the summer I stopped posting, this even lead to a mate of mine who now lives over sea's sanding me an email to ask was I ok, thanks mate you know who you are.

Anyway there was a couple of reason for things been quite here, it was summer :) but I guess the main reason was the little gaming group I use to play boardgames  & cardgames with once a week came to an end just coming into summer which also happened to be just as GW where releasing 8th ed 40K, now while I don't mind playing 40k it doesn't inspire as it once did & as I'd a lot of work to do to get my Sisters of Battle fit for the table top it wasn't something I wanted to blog about, so to help me getting through get them ready I also had to stop visiting all of your wonderful blogs as I knew that if I didn't I would never have gotten through all of that work as it would have turned my head to other things, so now you know anyway if you haven't got up & left your seat by now there are a couple of other things I want to talk about :) 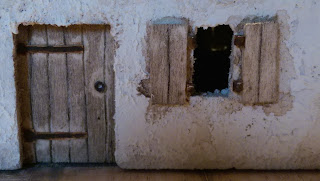 Buildings, now these can be as plane as simple as the one above or of a grand design but one thing that most type of buildings will have is windows & for me at least can be the hardest thing to get right, the one above not so much as that kind of building in nothing more then a little ope. 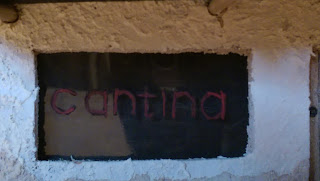 Above is the first window I did that got me thinking of how to finish a window for a building that nothing on the inside of it, this was when I thought up the clear plastic with black card idea, pay no mind to the crappy sign writhing :) 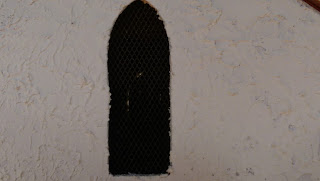 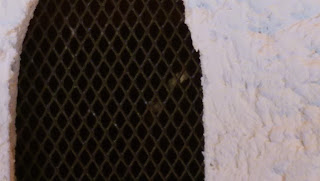 to solve the problem I went for a little wire mesh & just sprayed it a dark brown. 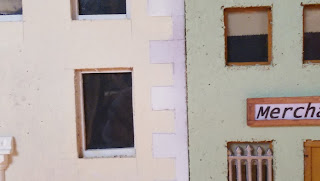 When I did the manor house I just went with the clear plastic & black card something I've regretted ever since, as if you look at the building beside it where I sprayed  the backing card half cream you get what looks like a little roller blind, this has lead me to think of lots of different ways I could finish windows. 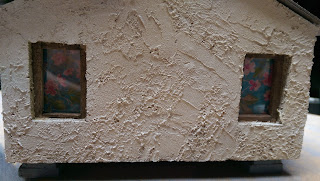 How about just having the curtains drawn ? another idea might be to use little pictures from magazines say for shop windows, anyway I'm sure by now you guys are getting the point. 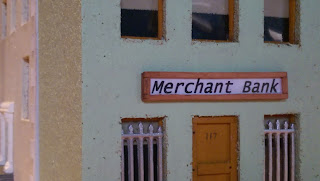 Anyhow while were still on buildings something else I wanted to hit on was signs, as nothing tells you what a building is like a sign, simple to do as its just a piece of printed out paper behind a strip of clear plastic mounted on a thin piece of balsa wood with a little frame around it. 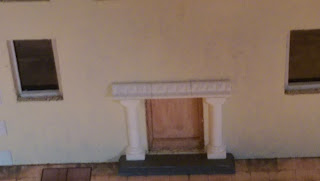 Remember I said I wanted to be able use the manor as different things ? 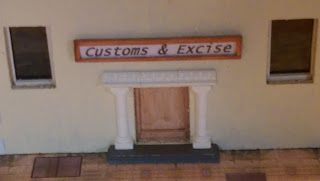 The sign is removable as it just stuck on with blue tack, also I don't put them on bases as this allows me to put them in different settings, the buildings do have bases but there inside them. 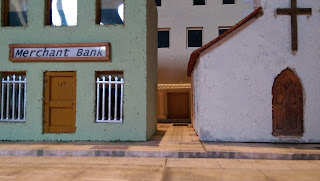 Just before I finish I want to kind of go back to the start if I may, taking time out in the summer  gave me sometime to reflex on where I want to go & do hobby wise this includes blogging as I see the two as one & the same, kind of like a horse & carriage sort of thing.

Looking back I think I was making to many pointless posts like the ones on what models I just bought & then again when I'd painted them, as I've said on here more then once I've no great painting skills, so going forward I'll just do be doing things like the Heart stone of Africa, Pulp Alley AAR's, leagues, a little chat post like this one, an odd on location & hopefully not to many when a shoot goes wrong kind of post :)

So you guys won't get to see much until they hit the big scene kind of thing but if you see a model you like & would like to know where I got it or know how I did something then just pop it in the comments & I'l be more then happy to let you know & talking about comments, I reply to them all but sometimes I forget to put it in the reply to yours so if your using a notification on replies you might thing I didn't but if you pop back over you'll find I did :)

That's a rap, as always my thanks for dropping in & if you'd care to leave a comment it would be welcomed & yes even replied to :)