Chapter 4, In the night

The start of this story can be found here http://ifitwasntforone.blogspot.ie/2017/03/connemara-feeney-taylor-davies-prelude.html

The next day passed with nothing of note, Connie & Taylor where amazed at how much Boswel new of the land & of the animals that lived on it, if they where unsure of what the name was of anything they seen they only to ask him to find out what it was. 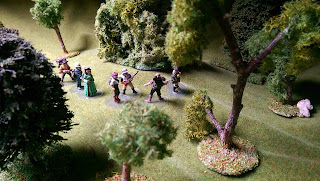 On the night of the following day there was an incident, what happened was this. 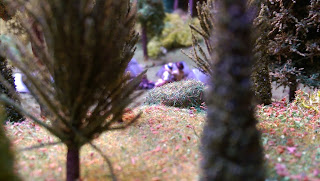 After the evening meal Brown headed out of the camp to do his nightly business before  retiring to his tent. 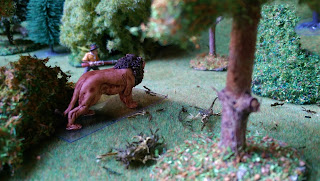 Around the campfire the first to react was Boswel, grabbing a burning stick out of the fire & then his rifle he ran in the direction that Brown had taken, quickly followed by Taylor, Dufour & Connie, Weber & Maud remained at the fire. 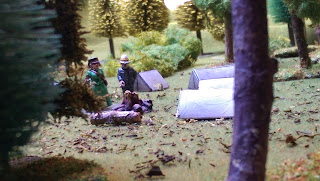 A trashing noise lead Boswel who covered the ground at speed as sure footed as any  gazelle. 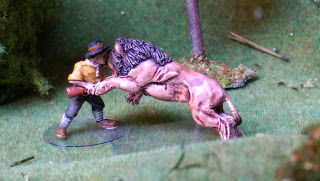 When he got to the scene a big male lion had Brown on the ground mauling him. 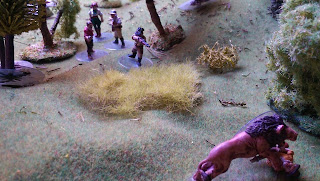 Even been the crack shot that he was firing at the lion for fear of hitting Brown wasn't something he could risk, so instead he discharged the weapon twice into the air.

This had the desired effect as the sharp crack spooked the lion who took flight but not quickly enough & just as the other's came up along side him Boswel fire once more bring an end to the lion's life.

Brown:" Moan moan"
Connie,Taylor & Dufour went to his side while Boswel went over to the lion to make sure it was dead.

Connie:"Easy Jim it's ok now we'll get you back to camp & fix you up"
Brown:" Moan"
Taylor:" He's in Bad shape Jean/Paul were going to need something to carry him on to get him back to the camp.

Boswel:"Let me see him, Connie will you hold up this torch please, Jean/Paul, Taylor get two strong branch's & fix one of the tents to them, I'll try & stop the bleeding. 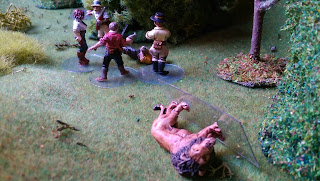 5 minute's later they returned with the home made stretcher "How is he ?" they both asked as one.
Connie:"Marco & I got the bleeding stopped but he's been very badly mauled"

Boswel:" The young lady was a great help, but I fear he's going into shock we need to get him back to camp & keep him warm by the fire.

Easing Brown onto the stretcher the 4 of them carried him back to the campsite in silence, when they got there Weber & Maud where standing by the fire & Weber had a pistol in his hand, they built up the fire but not out of any foreknowledge but from fear.

Boswel:"Weber gather up all the blankets quickly" he barked.

Weber didn't much like been spoken to like that but did as he  told with Maud's help. 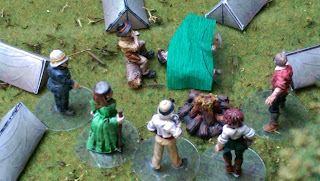 Laying  Brown (who was shivering like a leaf in the breeze) by the fire they covered him with the blankets & took it in turns to stay with him through the night & as the night faded away so to did poor Brown & a half hour after sunrise he was dead.

Maud:"Are you just going to leave him like you did the other poor soul ?" ask Maud nastily

Connie, who had to use all his willpower not to slap  her across the face "What a horrible thing to say Maud"

Dufour:"How far do you think it is to the Missionary Marco ? as I'd like to take his body with us if we could"
Boswel:"On our own & leaving everything that we don't need here behind us, I was hoping that we'd reach it just before night fall, it's not terrible far but there's some rough ground to cross, it would be next to impossible to take him with us I'm sorry to say"

Defour:"I see, then we'll give him a quick burial here & set off, I want to get the rest of you back before anyone else loses their life. 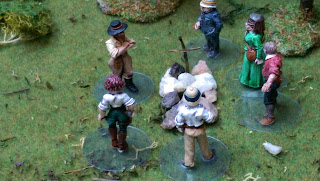 With heavy hearts they laid poor Brown to rest & after a few words from Dufour gathered up what they were to take with them for what they hoped would be the last day of the trek to the missionary.

Cut
As always my thanks for dropping in & if you'd care to be a film critic your comments would be welcomed :)