An Apocalypse game sort of

A few week's back I headed over to Alan's house for a day of gaming, I'm not sure if calling it an apocalypse game would be right even though it was 5k per player as there was none of the big things that make apocalypse what it is, kind of like having a fish & chips without the fish so we'll just call it a big game of 40K. 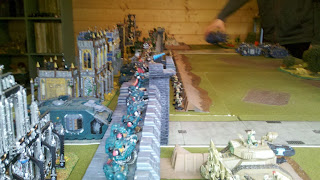 That's not to take anything away from what was a very enjoyable day's gaming with Alan & myself squaring off against Pearce & Ger with Alan & myself defending a imperial city from the forces of chaos, the mission & rules for it were the brainchild of Pearce & a good job he did on it to.

So the armies in use on that day were csm & ig (Ger) csm (Pearce) da (Alan) sob, sm & ig (myself), now these sort of games are what I love to play in where I feel like my man & women dollies  are going out to die for a reason. 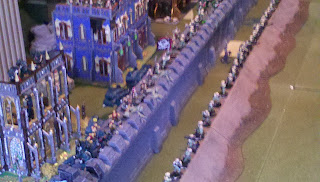 The mission was as I said the defence of the city with each building Alan & myself held at the end worth a point & each oue the the lads destroyed worth a point to them, plus you got a point for any hq ic you killed in close combat, the walls & buildings had special rules for destroying them & also to give us a 5++ from the hell turkeys. 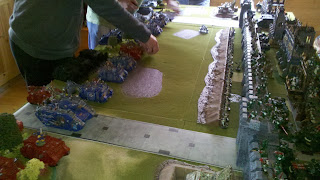 The first toe to toe was to be my Vulken & Ger's biker nurgle biker lord both doing a wound each only for me the low roller that I am failing a toughness test with a roll of a 5 for taking a wound from the black mace, it was going to be a long day. 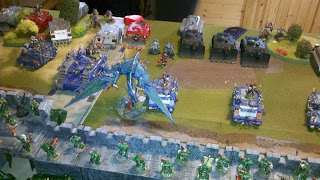 Next ic to fall was my Lord Commissar who had bravely (foolishly) taken to the trench's with 30 man guard squad only to be sliced & diced by the cut troth himself Huron Blackheart, this day was getting longer & longer. 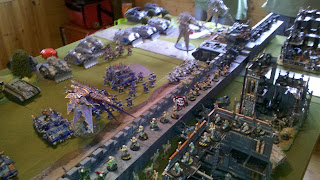 I was to be redeemed some bit be the blessed lady herself Saint Celestine who gave Huron some pay back maybe the day won't be so long after all, of coarse all this butchery was carried out to the sound of vindicetor shells & manticore rockets smashing into the walls, as the chaos forces tried to brake into the city 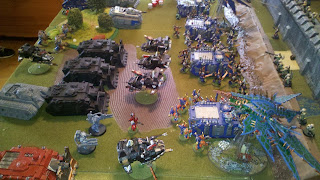 For a while it looked liked the walls just might hold, but even the best of build walls can only take so much of this kind of hammering  & so it was that they finally fell, but the forces of the imperium are made of stronger stuff then there walls. 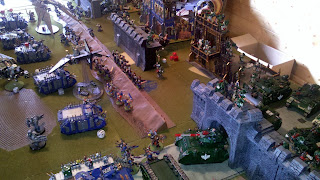 As the chaos forces started to spill through the gaps the imperial force under the lead ship of Belial where to stand tall beating back the chaos scum time & time again in defence of the city, it was in these close quarters
fighting that the leader of the chaos forces Abaddon was to fall under a hail of bullets. 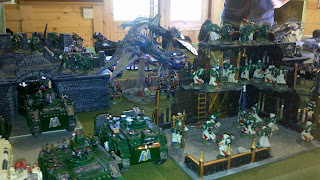 But still the bloodbath continued inside & out side of the walls with no quarter asked or given, from the bark of bolters to the screaming of exorcist missiles the slaughter went on long into the night. 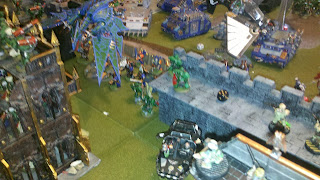 True hero's one & all from the lowly guardsman to the mighty space marine the members of the imperial forces gave their all in the name of the Emperor of man kind & when the dust had settled they still held most of the city in tacked but at the price of many a falling hero. 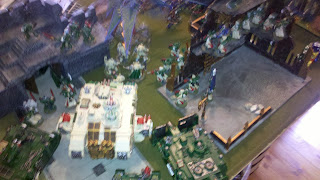 With the chaos forces bring down one more building as their parting shot meaning we where all to go home with our honor in tacked with the score for the game 4pts each.

My thanks to Alan for his help in the defence of the city & the photo's, to Pearce for a great & well taught out mission & to Ger for making that last dice roll of 6 to get the draw to bring to an end a great days gaming well done lads it was a blast.