Inquisitor's a game within a game.

Inquisitor's a game within a game.

40K is a game I've played for a long time & one of the thing's I really love about outside of the game is the setting, it a future where all the wired & wonderful come together.

Now as to be expected from someone that's been playing I've got at this moment 5 armies plus a dark mechanicus army plus plus all sort of other stuff, so a new codex is not something I'm likely to get over excited about sure if it's for an army I've got I might pick up some of the new releases but at this stage I'm not going to start a new army as I think the amount I've got now is enough.

For most of my time playing 40K I've tried to not use special characters as I've always found having your own to be more interesting, from my first army the Jade Dragons lead by Lord Falcon & Chaplin Draco right through to my Wordbearers based on the characters from Anthony Reynolds books. 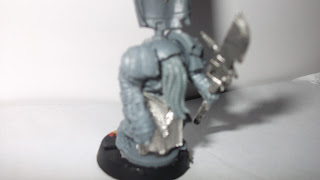 When I've used GW's I've found one of the big problems is their set in stone all their wargear is already picked for them so they act & play the same way every game, where as when I played the Jade Dragons I'd model for both the main characters in both power armour & terminator armour, in this kind of way you get a lot more freedom & while I will admit point for point the character you build will never be as good as a special character, but if winning is not your main aim then your own character will offer you so much more.
When is the last time you seem Vulken on a bike ?

Roll playing has always been something that can draw you in lots of different adventures (now I sound like Bilbo ) I have tried it on a couple of occasions but for some reason or another just when I was starting to really get into it the GM had to quit, haven lately started to use Inquisitors I've thinking of ways to use them apart from just sticking them into my army. 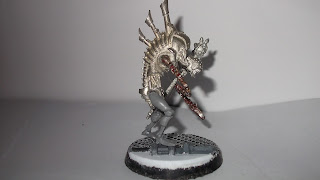 6th ed seems to be really trying to push us towards the narrative side of the hobby & I for one like it, nothing does narrative like roll playing so what if I could bring some roll playing into my normal games of 40K seems like a win win  to me.
So how to go about doing this this ? take an IG & try to work him up through the ranks I'm not sure how you would go about that & it not what I'm looking for, now as I've said before on this blog I believe that Inquisitors should be a HQ choice for any Imperial army not just Gray Knights, after all Inquisitors are not soldier's but secret police who use the might of all the Imperial forces to get the job done.

So why do I think Inquisitors are the best suited for what I want to do, well it's simple really as they don't belong to any army I can have them turn up in any that is not chaos or nids although some of them might not side with any race that is not Imperial, also they are independent characters so I can start off with a low points cost & has he gains more experience let him have more points to spend on wargear & a retinue, which is the part of this that I get to go wild with making all sorts of wonderful henchmen & characters for my Inquisitors to meet & fight along side.

The first step from here is to work out a points chart for the Inquisitor to progress along, so that from starting off fresh out of Inquisitor school he can work his way up to an Inquisitor Lord over time.
Example he gets experience points every time he plays apart in a game with bonus for things like blowing up a tank or his side winning the game & minuses for losing a wound or losing the game, but that will be in the next post I hope.
Posted by Frank O Donnell at 1/07/2013