A very good year, I think that's how I'll remember 2017  as I think I found my place in the hobby world, or as I said in a post near the end of last year my hobby bottle finely wash up on the beach :)

The surprise twist of the year was me getting back into playing 40K but that's of no real interest from a hobby point of view, no the two big things was The Heart Stone of Africa & solo play Pulp Alley & these two things drove all I did hobby wise apart from summer when I'd to get my Sisters of Battle ready for 40K, but I seen that as just something I'd to do & not apart of my hobby.

So that was the year that was so what about the year that's to be ?  well lets take a look at what my plans are for that shall we ?

First up is the Heart Stone of Africa, we left it with Connie, Taylor & Co safe & heading down river to Swatrow , this brought the first part of the story to a close & tbh brought me back to square one from the script side of things as apart from knowing where their going to head next I've not done any writhing for it by way of how the story unfolds, going forwards it will change from time to time. 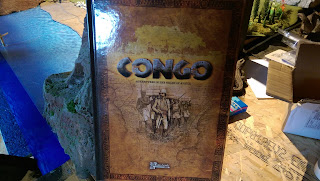 Yes Congo this was part of my Christmas loot & I'd bet you've guessed where their headed ?  the plan was from the start for them to head into the heart of darkness & I'll use the game Congo to help drive the story, this makes it more interesting for me as it takes things out of my control to a degree :)

Now you know the story will continue but as I've a lot of stuff to do script, stars, props & sets I'd guess it will take awhile to real get going with it but I'm still hoping to be able to do a post a month.

Pulp Alley will see the Perilous Island campaign continue & then move on to one of the other campaign books, which one I've yet to decide but at this point I can tell you it won't be Vice Alley as I've not the stars or sets to do that one yet.

While on Pulp Alley, Dave has been kind enough to send me some new cards to add to the solo deck for play testing :) these will imho add a good deal to the game but more then that I'll not say at this point, but rest assured I'll fill you in on theses  in the AAR's.

Just before I go I'd like to announce the signing of one of the biggest stars of all time by Nickel & Dime Productions, with a career spanning close on 100 years this start has appeared in many Hollywood block busters in his time & will I'm sure star in many more, just as the Nazis are everyone's favourite bad guys this guy is one of everyone's favourite monsters & I look forward to working with him :) I am of course talking about Mr T Rex  one of my all time favourite stars. 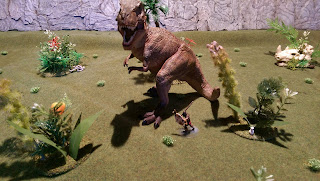 That's a rap for this post, so all that's left is to wish you guys a very Happy New Year & as always my thanks for dropping in & if you care to comment it would be welcomed,