If your new here welcome & here's a link back to the start of the story  http://ifitwasntforone.blogspot.ie/2015/05/tricol-first-contact.html

Jack was surprised to find that he & the crew where not the only passengers on board the Storm Runner, Captain Kandahar's response when asked about this was, as your all going to the same place it didn't make seance to turn down the extra credits. 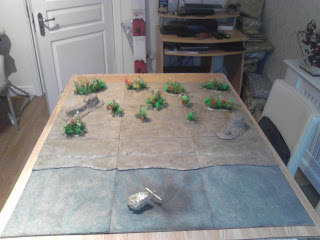 Kanadahar did however get Jack & Adele to agree to a truce for as long as they where on his ship something Jack believed would have been impossible if the other passengers had have been the Bash Street gang & despite all that had gone before Jack found that he couldn't hold a dislike for Adele Blanc-Sec.

Jack woke with a start it feel like something had rock the whole boat, the next second alarm bells where ringing out all over the boat something had exploded in the engine-room & the ship was going under fast, so fast in fact that there wasn't even time to launch the lifeboats it was every man for himself.
Designer's note, Well that was a blast of a game I must say, the mission was the lagoon of terror from the PA Perilous island book, but before I go a couple of things I like to add, I had made up a couple of pieces to form a lagoon but I mustn't have shaken the dark stain enough or at all as when I went to set up the table these where a lot lighter in colour so I had to just go with a beach instead, another think is I believe I should have had a larger area of water as the distant from the shore to the wrack was maybe not enough.

The game end with the Severed Head guys holding the major plot point (3pts) while the crew of the the Hermes ended the game with two minor plot points (2pts), for those fallowing the story the beastmen found here on the island in in fact a native of Tricol & is brown in colour unlike the beastman that attacked Dunmarn who came to Tricol on board Imperil ships & are red in colour.

Well that's it for me, my thanks to Paddy for the game ( & for helping out with the xmas decorations ) & as always my thanks to you for dropping in & if you want to know what other terrors await our hero's on the perilous island be sure to keep an eye on the blog.
Posted by Frank O Donnell at 12/10/2015