Governor Jardine takes to the podium in the house of Senators, my fellow Senators I take you've all had time to go over the report on the terrible event's on Dunmarn, sadly High Marshal Ulberexis investigations have not brought any more light as to what was behind the attack by the Beastmen, but as I'm sure you are all aware the beastmen community is a very close group & their leaders are claiming to be no wiser about who's behind this or why it happened then we ourselves are.
I offered the council of the beastmen the opportunity for some of their members to come here to the house & address you & to relay to you the feelings of the beastmen community on the happens at Dunmarn & to rise any issues that their community might have that might give us some clue as to why they attacked Dunmarn, but a last they declined the offer, as they believed that there was nothing they could tells us that would be of any help. 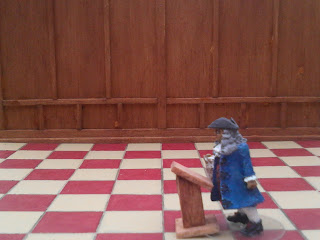 I will now offer the stand to anyof you my fellow Senators to rise any quistions you may have or indeed if you received any imformation of any kind that might be of help to High Marshel Ulberexis in his investigation. 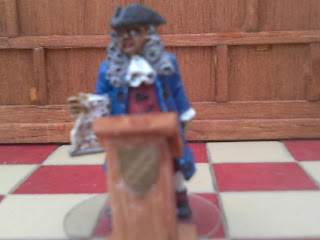 Senator Von Bittner rise to his feet & replies, I would like to take to the podium as I have in my procession a report that I would like to share with the house & it sad it is I am to say that it shows case after case of incompetents on behalf of those charged with looking after our safety.
The house is in silence as Von Bittner makes his way to the podium.
As you'll no doubt remember Senators I campaigned very hard here in the house a little over a year ago to get the law changed regarding ship's entering the Tricol system, no longer would they be permitted to make their way to any of our high docks & register themselves, but instead they where to be intercepted & boarded to hand over control of their ship or fleet of ships be brought to a holding point in high orbit until we had a chance to asset them to be sure that they would be on treat to the security of this system.

Sad it is then that my report starts with the failure of  Captain Gustavo Kloop of the federation ship Armoured Might to implement this new law & let what I believe & think you will agree with me after I've finished, what seems to be a very dangerous & clever criminal slip into Tricol. 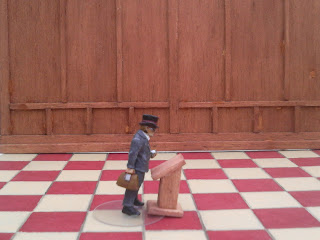 Upon been intercepted a ship of the name Hermes under the command of Captain Panama Jack refused to be boarded & instead raced for the asteroid belt, Captain Kloop ordered the fleet of ships he had rank over to set a coarse to try to cut the Hermes off & also open fire on the ship, but their shields held & they reach the asteroid belt before the fleet could reach them & proceeded to enter the belt, a feat I'm told most unlikely & highly dangerous for a ship of that size.

Foolishly believing that a ship of that size could not survive in the asteroid field Captain Kloop mistakenly reported the Hermes destroyed, it would seem this Panama Jack is a better captain then any of hours, but why that such a high risk if you had nothing to hide ?
A couple of days later there was an attack on one of the asteroid mining outpost & while the attackers are unknown I think we can all add 2 & 2 together.

Shortly after that there was an incident at a customs port on  Shin-Tethys, where apparently this Panama Jack was allowed to just walk out the gate, then came a shoot out on the streets of Malice with some hoodlums know as the Back Street gang, after that was his first attempt to kidnap Elaine Darrow daughter of the famous Tech-priest.
Luckily for Elaine she was save that day by a brave lady know as Adele Blanc-sec, sadly her luck was to run out a few days later at Malice spaceport where while trying to catch a flight Miss Darrow fell into the hands of this tug, in fact so bad was the violence at the spaceport that day that the armed forces had to close it down. 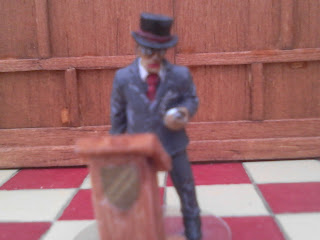 Miss Darrow was next seen in the company of a man matching Panama Jack description at the home of E.J. Demas an assistant of Tech-priest & who is still in hospital from a beaten  he gotten that day, by a deliveryman who had a package addressed to the Tech-priest, later that night the customs depot was broken into & the package stolen.

From there it appears they head for the seaport town of San-ta where a sea ships captain was killed, a captain it turns out was one of only a few survives from an experdition under takn by the Tech-priest who at this time is missing & feared lost at sea.
From there the boarded a Ship called the Storm Runner Captained by Nidel  Kandahar destination unknown, my report ends with all contact with the Storm Runner been lost, we've also in that time had the attack on Dunmarn by the beastman who where using weapons that can not be accounted for, I would ask you given all I've reported where you might think those weapons might have come from ?

It deeply sadden me to say this after all the great service they have given to Tricol, but the blame for all of these happenings lay at the doors of  Governor Jardine & High Marshal Ulberexis & I call into question if they are still the right men for their jobs.
Senators thank you for your time & with that Senator Von Bittner steps away from the podium as the house goes into uproar.
Designers note; wow a bit long winded that one but I think it was important for two reason, one as a refresher as to all that has happened up to now as it is now 7 months since the first contact post, do you remember that it was weapons in the two creates that Jack took off the asteroid & that one of them was taken by the Bash Street gang, & that he told Marshal Alex's where he'd hidden the other one ?

It is also important for the story going forward, while yes at this point Jack & the crew are been put through the loops in the perilous island campaign book there is also another bigger story unfolding in Tricol that will set the stage for many a thing to come.

So if you made it this far my thanks for dropping in & if you didn't make it my thanks anyway.