Tricol, In the asteroid field, a Pulp Alley scenario AAR

Get us close to one of big ones MrEl'Tevy & then maintain the same course & speed as it, ordered Jack, El'Tevy looked back over his shoulder with a look of concern on his face.

Noticing this Lucinda said Jack do you think that's wise ? Its not ideal replied Jack but its the best chance we've got of staying alive until we can come up with a plan for what were going to do & besides the best way to survive in an asteroid field is to move about as little as possible, we'll be ok trust me said Jack with a grin on his face that Lucinda knew only to well. 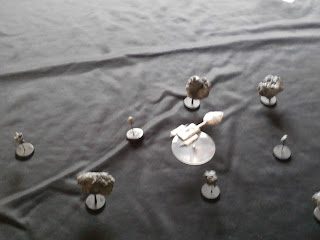 As the Hermes drew up a long side the huge rock Jack asked for it to be put up on the viewing screen, what are you looking for asked Lucinda who was now standing at his side, on the screen was part of the asteroid, pan the camera a round Jack order I want to see every bit of that rock, because if I'm not mista... bingo there's what I was looking for he called out as some kind of a base came into view. 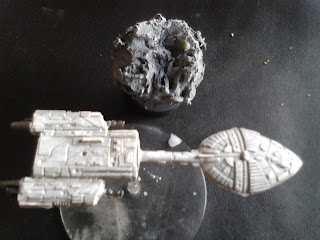 A mining colony ask Lucinda ? that would be my guess alright said Jack, I think we should take a little trip down there & see if we can learn anything about this system, get the shuttle ready & have an away team meet me in the hanger bay, fancy a trip he ask turning to Lucinda ? wouldn't miss it for a world she replied.

Paddy & myself played out the smash & grab mission from the rulebook with Paddy using Jack & his crew & me using one of the pre made one with one little change in a follower, a round the ogryns was extreme perils as Paddy rolled danger danger on the events table, the minor plot points where 4 green crates with the major one been a computer terminal inside the big building, one of my guys had hidden set up.
The servitors had no effect on the game.


Once again pulp alley deliver's a very enjoyable game with Paddy winning by 2 plots to 0, well after all Jack is the hero of this story, that & the fact that for the whole game I only pasted 1 recovery check, well if it wasn't for ones LOL

Just a note on the 2 downed characters, Mr Smith got hid with a head shot & will start the next mission with -1 to a random skill, while Father Felix can start the game hidden.

Well that it from me I hope you enjoyed the report as much as we enjoyed playing it, my thanks to you know who for taken part & a well done on getting the league off to a good start & as always my thanks to you for dropping in.
Posted by Frank O Donnell at 6/01/2015