Last week I played a game of 40K  using csm with ig allies for the first time since 6th ed came out & while it was a very enjoyable combination it just didn't feel the same as the csm with ig allies I played this week.
What the hell are you waffling about now Frank I hear you ask, well the answer is simple you see I've got two ig armies one imperial & one renegade. 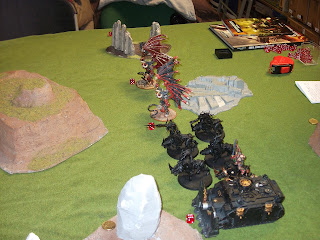 The pictures are from my game last night against Kevin's daemons. 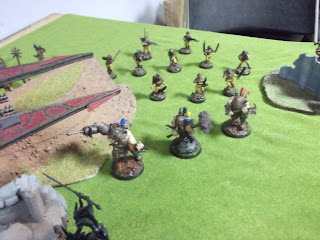 You see for me a lot of the enjoyment I get out of this hobby is if my army has the right feel & look about it.
While I know that lovely fluffy armies will always give you that nice feel I also recognise the need to have a competitive army when playing in a club as competitive as the DGG. 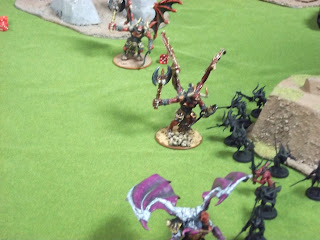 So while I've bitten the bullet & will once again run list with things like two dp's in it I'll still try to get the army to give to give me this feeling of looking right. 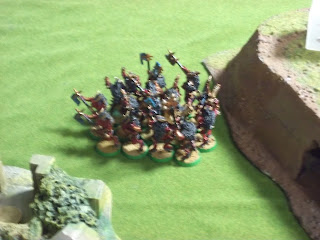 One thing how ever that doesn't bother me funnily enough is proxy as long as the stand in model has the right look & feel about it to do the job of the model it's standing in for, as you'll have seen in one of the photo's above there was some renegade ogryn's I was using, the ogryn's where in fact stand in's for spawn's with whom they have a lot of common rules. 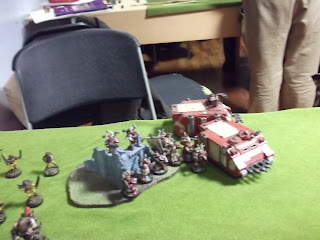 Like wise in the same picture you'll notice part of a hellblade again this also is doing the stand in job as I use it as a helldrake which is in my opinion an acceptable stand in & there is also the fact that not only do I want to get the right look & feeling out of my army but I also like to try to give the other player a good feeling about what he is going up against. 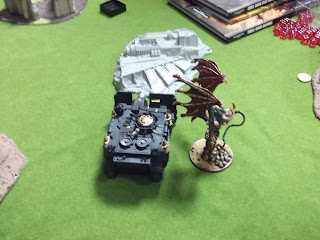 Now another thing I should point out here & now is that while I really enjoy going up against a nicely built & painted army it's not as important to me as making sure my own army feels right to me & from what I can gather from other blogs & talking to other players I'm not a lone in trying to get that right feel, that's why when you have players doing armies like eldar with tau allies trying to do conversions to make the tau unit's look like eldar one's but at the same time stand out enough that people will know which is which. 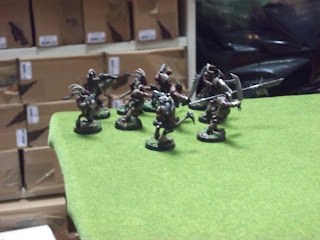