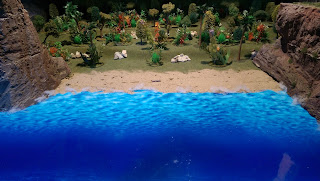 A story by Dave Phipps at Pulp Alley
Chapter Six, Blood Sacrifice
Collins" Where the hell has Moore got to ? there's no sign of him"
Grace " I shouldn't have left him when he was down, but he said he was alright I hope that thing from the lagoon hasn't got him" 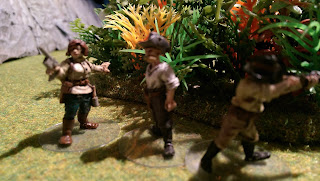 Collins" Now don't start blaming yourself Grace, I'm sure he'll turn up"
Just then a native woman approached them. 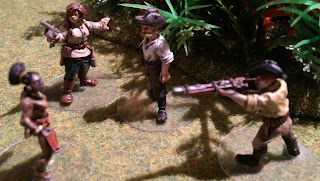 Woman" My name is Zome, come quickly your friend in the pit they put him"
Collins "Hold on a minute, you speak English how & who put him in the pit & why ?"
Zome" Yes Professor Forbes he learn me, but that's not important, your friend in great danger he is"
Collins" Ok lead the way"
As Zome lead the way she explained to the group that Shagunia the witchdoctor against the elders of the tribe's wishes  had started to make human sacrifices at the pit of the snakes & that many of the young man of the tribe had taken to following him.
As they came closer they began to hear a chanting
The same chanting has also lead the German this way.
Turn 1, As the Germans roll on the random event table stopped anyone from doing more then walking & the cards didn't effect anything so turn 1 was a simple enough turn,AKA nothing happened lol
Turn 2 Again the cards didn't play much of apart, but we'd a bit of action & Muller failed his recovery roll so is out of the game, while Hess has a Minor plot point & Gloup has one success on another.

Turn 3 was like the clam before the storm with both sides getting ready for what was to come, the only card of note was Helga's the clam which stopped every one doing anything other then walking, Gloup fell fowl of the plot point perilous went down but passed his recovery


Turn 4 The Germans now have 2 minor plot points while the BB's have the major one, the 3 cards where all perils Helga & Brown passed their's but Fritz failed his & went down, Gloup failed to get the other success he need to complete the plot point & was later shot by Grace going down, Brown Fritz & Dowl also went down while Collins was wounded. recovery Collins & Dowl passed while Brown Fritz & Gloup failed & went out of the game. 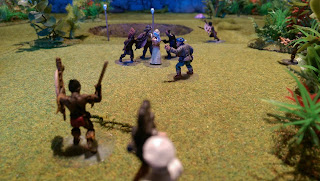 Designers Note, with the way things had gone for the BB's I wasn't surprised when I roll for this mission that it was one of the BB's which turned out to by Moore in the pit leaving them a man down, so I decided for the first time in the campaign to have one of the leagues use some of their resources & as luck would have it the BB'S had only had one back up point leaving to them having to swap 2 tip off points for 1 back up point to get a level 2 follower, but luck is a fleeting companion as you can see from this game as it was the Germans turn to fall fowl of bad dice & cards.
On the card side of things as you might know I'm play testing some new ones for Dave, so unlike how I did it in the last game which I wasn't happy with I decided to not really go into them this time.

From the story side of things I didn't want to just have some random guy just pop up out of nowhere as we are on an island don't forget, so I went with a native woman who was a level 2 scout & was rewarded I think by this as as the game worked out she didn't have to do anything : )

So for the first time in the campaign the BB's are a head on reputation but are way behind on resources which could play a big part later on, next time it will be the Sinister Swamp which leaves me with some work to do because like the pit I don't want the swamp areas sitting above ground so I need to make up some more tiles.

Final note before I go, I'd some strong words with the cameraman about his sloppiness in catching the shadow of the gantry in a couple of shots near the end, if this in anyway took from your enjoyment of the movie then you can claim a full refund at the kiosk on the way out. : )

Well that's it for this post, my thanks to Dave https://store.pulpalley.com/  for the script & as always to you guys for dropping in & if you'd care to leave a comment it would be welcomed. :)